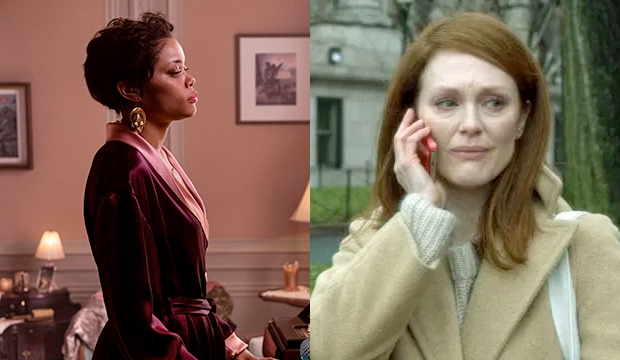 Usually at the Oscars, all four acting winners hail from films that are nominated in multiple categories. After all, the voters like what they like. But on rare occurrences, an actor prevails as the only nominee from their film. This year, many of Gold Derby’s Oscar Experts predict Andra Day will do just that. The singer-songwriter is the only representative for Hulu’s “The United States vs. Billie Holiday” — that’s right, it was even snubbed in Best Song for “Tigress & Tweed.” If Day pulls off an Oscar triumph, she’d be the first since Julianne Moore (“Still Alice”) to win for a film that was otherwise ignored.

As of this writing, 7 of our 23 Experts from major media outlets think Day will prevail: Joyce Eng (Gold Derby), Jazz Tangcay (Variety), Clayton Davis (Variety), Shawn Edwards (WDAF-TV Fox), Keith Simanton (IMDb), Sasha Stone (Awards Daily) and Peter Travers (Rolling Stone). That puts her in second place on our Best Actress chart, behind only Carey Mulligan (“Promising Young Woman”). The other three nominees are Viola Davis (“Ma Rainey’s Black Bottom”), Frances McDormand (“Nomadland”) and Vanessa Kirby (“Pieces of a Woman”), the latter of whom is also the sole nominee from her film.

“The United States vs. Billie Holiday” tells the true story of the iconic jazz singer’s problems with the law in the 1940s. The Lady Day biopic is directed by Lee Daniels and written by Suzan-Lori Parks, based on the book “Chasing the Scream: The First and Last Days of the War on Drugs” by Johann Hari.

Day was nominated twice at the Golden Globes, winning the Best Drama Actress trophy but losing Best Song to “Io Si (Seen)” from “The Life Ahead.” “The United States vs. Billie Holiday” was also thrice recognized at the Critics Choice Awards for Best Actress, Best Song and Best Hair & Makeup. The film was later snubbed at the Screen Actors Guild Awards and BAFTA Awards, suggesting those voting bodies may not have actually seen it. Don’t forget, it was a rather late release, first streaming on Hulu on February 26.

Moore prevailed for playing an Alzheimer’s patient in “Still Alice” (2014) thanks in part to a huge Oscar narrative that had formed around the actress. She had been nominated, and lost, four prior times at the Academy Awards: “Boogie Nights,” “The End of the Affair,” “The Hours” and “Far From Heaven.” In other words, it really didn’t matter that she was the only nomination for her movie, as many voters felt it was finally her time.

Conversely, “The United States vs. Billie Holiday” is Day’s feature film debut. If she wins, she’d join an elite club of first-timers that includes Marlee Matlin (“Children of a Lesser God”), Barbra Streisand (“Funny Girl”), Julie Andrews “Mary Poppins”) and Shirley Booth (“Come Back, Little Sheba”). Can she pull it off?