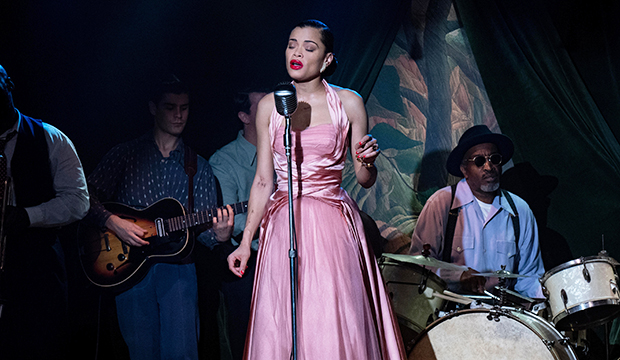 Andra Day is the latest singer to take the plunge into acting, making her feature film debut in the upcoming Hulu drama “The United States vs. Billie Holiday.” The “Rise Up” singer plays Billie Holiday in the biopic, which centers on the legendary singer’s struggles with addiction and her experience being targeted by the Federal Department of Narcotics. Day performs with her own vocals on Holiday’s biggest hits throughout, but there is also an original song at the end of the film titled “Tigress & Tweed,” written by Day and Raphael Saadiq.

“Tigress & Tweed” evokes Holiday’s most haunting record, “Strange Fruit,” about the lynching of Black Americans. The original song begins with Day even referencing “Strange Fruit” directly: “Say a prayer for me. Strange fruit, come down off that tree.” The song blends jazzy roots with a more modern hip-hop beat, bringing Holiday’s past struggles to the present. While Day is receiving strong Oscar buzz for her performance as Holiday — she’s in sixth place in Gold Derby’s Best Actress odds — she could also become the fourth consecutive person to be nominated for both acting and songwriting simultaneously.

Mary J. Blige made history in 2018 when she became the first person nominated at the Oscars for acting and songwriting in the same year, landing in Best Supporting Actress and Best Original Song (“Mighty River”) for “Mudbound.” She was joined by another singer the very next year, Lady Gaga, who was nominated in Best Actress for “A Star Is Born” and won Best Original Song for “Shallow” from the film. That club gained a third member last year when Cynthia Erivo was double-nominated for starring in “Harriet” and writing “Stand Up” for the Harriet Tubman biopic.

Meanwhile, many are predicting that Leslie Odom Jr. could extend this pattern with bids in Best Supporting Actor and Best Original Song for “One Night in Miami,” for which he penned “Speak Now.” If Day were to nab double Oscar nominations too, it would be the first instance of two performers pulling off this feat in the same year. Odom would also be the first male performer to do so.