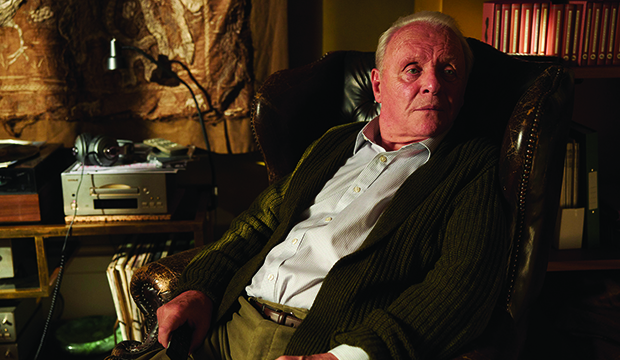 Sunday’s Oscars ended on a chaotic but also anticlimactic note as Best Picture was the antepenultimate category presented, followed by Best Actress and Best Actor. And the latter did not go to frontrunner Chadwick Boseman (“Ma Rainey’s Black Bottom“) as most people — including, clearly, producers Steven Soderbergh, Stacey Sher and Jesse Collins — expected but Anthony Hopkins (“The Father”), who was MIA, leaving presenter Joaquin Phoenix to quickly wrap up the show. It was awkward all around, especially for fans who were trying to process Boseman’s loss. So how did Hopkins pull off the W?

1. Passion trumps narrative
On paper, it looked like it was Boseman’s to lose. The late star had won the Golden Globe, Critics Choice and Screen Actors Guild Award, losing just the BAFTA to Hopkins. Many had dismissed the BAFTA result as a home-field advantage win for Hopkins, who was probably sleeping like a baby in his native Wales when he won the Oscar, which I had cautioned against doing. The fact of the matter is, Hopkins’ tremendous, GOAT-level performance connected with a lot of people. Do a quick search on Twitter (well, wade past all the Oscar reactions) and you’ll see nothing but praise for Hopkins. Many of the anonymous Oscar ballots from the past week featured voters stating how much they were floored by Hopkins’ performance and that they voted for him. And lest we forget, Hopkins, now the oldest acting winner ever at 83, received all-time raves for his turn after “The Father” premiered at Sundance in January 2020, which admittedly is a lifetime ago, and was the early frontrunner almost all of 2020 until Boseman came along.

Boseman gave a fantastic performance in what is now, sadly, his final film and would’ve been a worthy winner. He was the sentimental favorite and a win for the “Black Panther” star would’ve meant a lot to many people, but voters just chose their favorite performance over the narrative and/or the presumed favorite. Last year, they loved “Parasite” and voted for it pretty much down the ballot, including giving Bong Joon Ho that surprise Best Director win. And honestly, with all the rubber-stamping that happens during awards season, especially in the acting categories lately, it’s refreshing when voters go their own way and don’t feel pressured to follow the herd.

2. It’s Glenn Close vs. Olivia Colman all over again
As many, myself included, have pointed out, the anonymous ballots were very reminiscent of the ones about the Best Actress race two years ago. There were lots of variations of the same sentiment, which was, “Oh, Chadwick will win, but I voted for Anthony. He was my favorite.” That’s basically what voters said in 2019: “Glenn will probably take it, but I voted for Olivia.” Both Boseman and Close were frontrunners with strong narratives (overdue legend; untimely passing of a major star and talent), but that could be a double-edged sword if you don’t have passion behind you — that’s not to say neither of them had any passion, but they were up against people who had more passion. Another indication of the lack of a ton of passion for Boseman’s performance itself was his loss at the Independent Spirit Awards to Riz Ahmed (“Sound of Metal”). The Spirit Awards haven’t been afraid to award Oscar frontrunners in recent years, but he fell to a performance that, like Hopkins’, also had a lot of love behind it. Plus, when people are under the impression that one person is winning and said person is not their favorite, that almost gives them more incentive to vote for their personal favorite.

3. “The Father” peaked at the right time
It was fun to dunk on the prolonged rollout of “The Father” — it didn’t hit theaters until Feb. 26, 13 months after it first premiered at Sundance — but we must bow down to the Sony Pictures Classics team. They played the long game, literally. They knew they were sitting on a winning lottery ticket, and with the extended season, they merely focused on the Oscars, guilds and precursors be damned. “The Father” had an up-and-down precursor run — it got four Golden Globe nominations but didn’t win any; missed key guild bids, like the Producers Guild of America Awards and the ACE Eddies, leading many to underestimate it; and nabbed six BAFTA nominations — the same amount it got at the Oscars. That alone should’ve been a clue it was playing well.

When “The Father” hit VOD in March, there was universal praise for the film and Hopkins’ performance from viewers — the movie has an 8.3 on IMDb, which is wild when you remember it’s a movie about an elderly man with dementia, and its audience ratings keep rising everywhere. It could’ve just been a Film Twitter bubble thing, but Hopkins’ BAFTA upset proved that it was striking a chord with the industry as well (but again, many brushed this off as a BAFTA thing for a Welsh son). “The Father” merely needed to be seen, and once it was, Hopkins’ performance became undeniable to voters. And in such a long season, it may pay to be seen last.

4. “Ma Rainey” was weak
Just like Colman in “The Favourite” vs. Close in “The Wife,” it helps to be in the stronger film. “The Father” had six nominations, including Best Picture and Best Adapted Screenplay, the latter of which it won, compared to five for “Ma Rainey,” which surprisingly missed Best Picture and Best Adapted Screenplay. That was the first sign that the Netflix film was weaker than everyone thought — it was as high as third in our Best Picture odds in January after it premiered in December — but many assumed Boseman would be able to survive that. After he and Viola Davis won Screen Actors Guild Awards, and with the wide-open Best Actress race, the possibility of “Ma Rainey” sweeping both lead awards was very much on the table. That would’ve made it the first film to win both lead Oscars without a Best Picture nomination, and with its locked crafts categories that it did win, Best Makeup and Hairstyling and Best Costume Design, the August Wilson adaptation would’ve won the most Oscars (four) for a non-Best Picture nominee since “The Matrix” (1999).

Even with all the wackiness and unprecedented twists of the season, that ultimately proved to be a bridge too far. A Best Picture nomination demonstrates strength, if not passion, and would also pretty much guarantee your movie would be seen in voters’ screener piles. (Ironically, “Ma Rainey” arguably was seen since it was on Netflix and there was obviously interest in seeing Boseman’s last film; it just didn’t connect in the same way.)

SEE Oscar Experts slugfest: Breaking down the highs and lows of the 2021 ceremony

5. Posthumous winners are rare
Maybe it’s because everyone remembers Heath Ledger‘s Best Supporting Actor triumph for “The Dark Knight” (2008) in modern times, but posthumous Oscar wins aren’t that common. In acting, there have been nine posthumous nominees, Boseman included, and only two have won: Ledger and his fellow Aussie Peter Finch in Best Actor for “Network” (1976). This is the academy that gave James Dean, another promising actor taken too soon, two posthumous nominations, but no win. It also denied Spencer Tracy, who died shortly after wrapping “Guess Who’s Coming to Dinner” (1967), a third Best Actor Oscar while awarding his partner Katharine Hepburn for the film. Narratives can take you far, but voters have shown more often than not that they are not swayed by sentiment.

6. BAFTA > SAG
For nearly all of the SAG Awards’ 27-year existence, a SAG win almost always guaranteed you the Oscar since actors make up the largest branch in the academy. But BAFTA has always been a low-key great precursor since it became one 20 years ago. BAFTA matched the Oscars in the top eight categories this year and called both lead acting races even after changing its nomination process by adding juries. Hopkins and Best Actress champ Frances McDormand are the first lead acting Oscar winners to prevail with only BAFTA as their precursor. BAFTA has called tight or unclear races before, such as when Tilda Swinton took the supporting actress BAFTA en route to Oscar for “Michael Clayton” (2007) in a race not unlike Best Actress this year or when Alan Arkin won the supporting actor BAFTA and Oscar for “Little Miss Sunshine” (2006) after Eddie Murphy (“Dreamgirls”) won the other precursors and wasn’t even nominated at BAFTA.

With the academy’s increasingly international membership, BAFTA will arguably only be more reliable going forward. BAFTA is not only an industry precursor, but it’s the only one that works just like the Oscars do: The entire membership votes for winners in all categories. On the other hand, SAG will likely become less reliable. The SAG-AFTRA merger in 2012 drastically changed the composition of the guild’s membership with non-actors joining the ranks, and that’s been somewhat reflected in SAG’s nominees and winners, which have generally become more populist and broad, save for some true passion picks breaking through like “Parasite” and Yuh-Jung Youn this year for “Minari” — the first individual nomination for a non-English language performance since the merger. I’ve always said that Boseman was more locked at the SAG Awards than the Oscars because he’s precisely the type of star they’d go for with the type of loud, actorly performance they’d eat up, coupled with his narrative. Davis had a similarly big, not to mention transformative, turn and is a revered queen at SAG (this was her sixth win and fifth in an individual category). But as more non-actors make up SAG-AFTRA in the future, there will be less crossover with the academy’s acting membership, so SAG can only mean so much without some other major components in play as well.