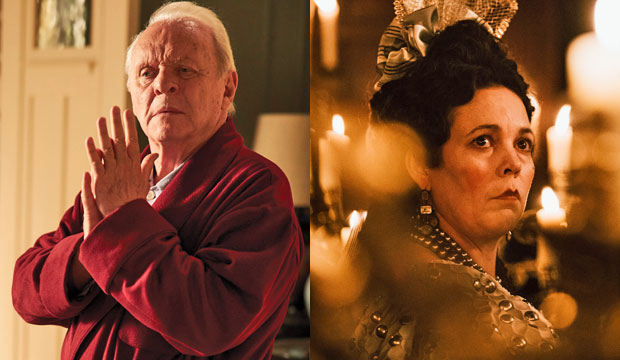 Anthony Hopkins and Olivia Colman share the screen in “The Father,” and they could share a pathway to Oscar as well. Two years ago Colman was a Best Actress underdog for “The Favourite” as Glenn Close was racking up plaudits for “The Wife.” But then Colman won the BAFTA Award, and she ended up overtaking Close for the Oscar too. Will it be the same for Hopkins, who just won BAFTA against current Oscar front-runner Chadwick Boseman (“Ma Rainey’s Black Bottom”).

The thing about the BAFTAs is that if Hopkins’s victory was an anomaly, it’s pretty easily explained. A British person often wins against an American, especially in a close race, even if the Brit doesn’t end up winning the Oscar: consider Colin Firth (“A Single Man”) over eventual Oscar champ Jeff Bridges (“Crazy Heart”), Geoffrey Rush (“The King’s Speech”) over Christian Bale (“The Fighter”), and Dev Patel (“Lion”) over Mahershala Ali (“Moonlight”). Sometimes the Oscar winner isn’t even nominated at the BAFTAs, as when Brits Helena Bonham Carter (“The King’s Speech”) Chiwetel Ejiofor (“12 Years a Slave”) and Rachel Weisz (“The Favourite”) were the British academy picks.

Additionally, the BAFTAs have had a, shall we say, somewhat mixed history when it comes to honoring movies about Black people. This year, for instance, had incredibly diverse nominees for acting, but that was because of a new jury system put in place after criticisms of the British academy’s lack of inclusion. Categories that weren’t decided by juries, including Best Picture, ended up predominantly favoring movies about white characters.

So we can’t necessarily take Hopkins’s BAFTA win to mean everything, but it would be foolish to assume it doesn’t mean anything. The BAFTAs and the Oscars have agreed on the last six Best Actor winners in a row, and they weren’t all British. The BAFTAs went for Yanks Leonardo DiCaprio (“The Revenant”), Casey Affleck (“Manchester by the Sea”), Rami Malek (“Bohemian Rhapsody”), and Joaquin Phoenix (“Joker”) just like the Americans did. So Hopkins’s win may very well not be just a British thing.

And awards groups’ appreciation for “Ma Rainey’s Black Bottom” has been inconsistent. The Golden Globes mostly shrugged off the movie, only nominating Boseman and Viola Davis‘s performances. The Critics Choice Awards loved the movie, though, nominating it eight times including Best Picture. The SAG Awards loved it too, nominating its ensemble cast. But Boseman won all of their Best Actor prizes no matter how much those groups liked his movie as a whole.

The Oscars and BAFTAs both seemed to be ambivalent about the movie. The Oscars nominated it five times and the BAFTAs only three; neither group nominated it for Best Picture, Best Director, or Best Adapted Screenplay. At the BAFTAs, the film ultimately won both of its craft noms (Best Costume Design, Best Makeup and Hair), but lost Best Actor. At the Oscars, it’s predicted to win those same craft awards based on the combined predictions of Gold Derby users, but will the American academy appreciate Boseman more than the British academy did?

Both academies appeared to like “The Father” better overall as a movie. It was nominated for Best Picture and Best Adapted Screenplay at both events. And in the Oscar race for Best Actor, Boseman is the only nominee whose film isn’t up for Best Picture, which on paper you’d think would put him at a significant disadvantage. The last Best Actor winner without a corresponding Best Picture nomination was the aforementioned Jeff Bridges for “Crazy Heart,” which may actually be a good omen for Boseman since Bridges lost the BAFTA to one of his Oscar rivals too.

Suffice it to say that a posthumous win for Boseman’s career-capping performance isn’t guaranteed at the Oscars despite how much well deserved love and support there is for him and his performance. Whichever way it goes, the only disappointment is that only one person can win in a field stacked with all-timers.