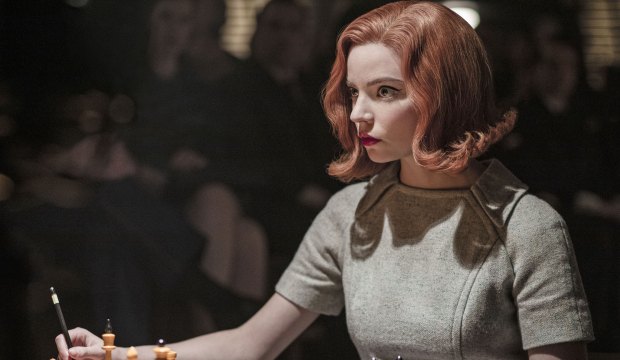 Nominations for the 78th Annual Golden Globe Awards were announced Wednesday morning by Sarah Jessica Parker and Taraji P. Henson, and history could be made when the awards are eventually handed out later this month. Anya Taylor-Joy,Olivia Colman and Sacha Baron Cohen are poised to potentially join an elite group of performers who’ve won two acting awards in the same year.

After Taylor-Joy broke out as the lead in Netflix’s limited series adaptation of “The Queen’s Gambit,” a Best Movie/Limited Series Actress nomination for the young actress seemed like a foregone conclusion. She’s up against Cate Blanchett (“Mrs. America”), Daisy Edgar-Jones (“Normal People”), Shira Haas (“Unorthodox”) and Nicole Kidman (“The Undoing”).

Taylor-Joy was leading the race heading into the nominations announcement on Wednesday, and she had been for a while. It’s exactly the kind of role the Hollywood Foreign Press Association loves, so if there was one person you could count on getting in this year, it was her. What was less certain, however, was Taylor-Joy’s other nomination, which came on the film side for her turn in the title role in the theatrically released film “Emma,” the latest adaptation of the famous 1815 novel by Jane Austen. Taylor-Jay was nominated for Best Film Comedy/Musical Actress alongside Maria Bakalova (“Borat Subsequent Moviefilm”), Kate Hudson (“Music”), Michelle Pfeiffer (“French Exit”) and Rosamund Pike (“I Care a Lot.”)

Meanwhile, after taking home the award for Best TV Drama Actress last year, Colman was once again nominated for her performance as Queen Elizabeth II in Netflix’s royal drama “The Crown.” If she wins again this year, she will be the first actress to win back to back in the category since Claire Danes did so for her work on “Homeland” in 2012 and 2013. But first she’ll have to defeat her fellow nominees, who include Jodie Comer (“Killing Eve”), Emma Corrin (“The Crown”), Laura Linney (“Ozark”) and Sarah Paulson (“Ratched”).

While Colman’s lead in the category going into Wednesday’s nomination announcement was rather sizable, she was only in second place in Gold Derby’s odds for Best Film Supporting Actress for her turn in “The Father.” If she hopes to take home two acting awards in the same night Colman will have to also overcome Glenn Close (“Hillbilly Elegy”), Jodie Foster (“The Mauritanian”), Amanda Seyfried (“Mank”) and Helena Zengel (“News of the World”). The three-time champ has never lost at the Globes.

Baron Cohen scored expected nominations in Best Film Comedy/Musical Actor for “Borat Subsequent Moviefilm” and Best Film Supporting Actor for “The Trial of the Chicago 7.” In the former category, he’s up against James Corden (“The Prom”), Lin-Manuel Miranda (“Hamilton”), Dev Patel (“The Personal History of David Copperfield”) and Andy Samberg (“Palm Springs.” Baron Cohen previously won for the first “Borat” film 14 years ago and would be the first person to win the category twice for playing the same character.

In supporting, he’s nominated alongside Daniel Kaluuya (“Judas and the Black Messiah”), Jared Leto (“The Little Things”), Bill Murray (“On the Rocks”) and Leslie Odom Jr. (“One Night in Miami”).

If Colman, Taylor-Joy and Baron Cohen all manage to win two awards come Feb. 28, they’ll become just the fifth, sixth and seventh actors to complete the impressive feat, following in the footsteps of four actresses. Sigourney Weaver was the first person to see double, taking home the awards for supporting and drama lead for “Working Girl” (1988) and “Gorillas in the Mist,” the latter of which was in a three-way tie with Jodie Foster (“The Accused”) and Shirley MacLaine (“Madame Sousatzka”). Next came Joan Plowright, who earned both film and TV supporting Globes for her performances in “Enchanted April” (1991) and “Stalin,” respectively. Dame Helen Mirren followed when she was crowned the winner for her royal performances in “The Queen” (2006) and the miniseries “Elizabeth I.” And lastly, the most recent double winner was none other than Kate Winslet, who took home her first two career Globes in supporting actress for “The Reader” (2008) and in drama actress for “Revolutionary Road.”

The Golden Globes will be handed out Sunday, Feb. 28 on NBC.