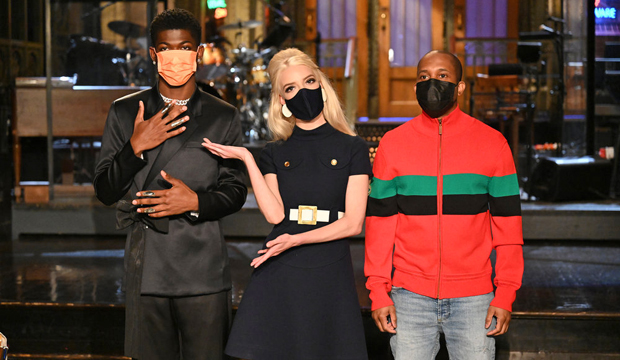 Anya Taylor-Joy hosted the season finale of “Saturday Night Live,” featuring musical guest Lil Nas X. This marks the first appearance for both host and musical guest on the NBC sketch series, though both were parodied earlier in the season. For her “SNL” monologue, Taylor-Joy announced that for the first time this season, the crowd was at full capacity with vaccinated audience members.

“If you’re feeling nervous sitting so close to another person, just picture them naked,” the actress suggested, before quipping, “Just kidding, we’ve all been inside for a year. Everybody’s already picturing everyone naked.” Taylor-Joy then spoke about her unique upbringing, having been born in Miami and raised between Argentina and London, with her first language being Spanish. The actress joked, “Legally, my ethnicity is Fashion Week.”

Taylor-Joy transitioned to talking about her starring role in the Netflix limited series “The Queen’s Gambit.” Considering its immense popularity, it’s a wonder if anyone missed it, with the actress observing, “It was ‘Tiger King’ and ‘Queen’s Gambit.’ That was the only new TV for, like, months.” She noted that the series prompted a huge number of viewers to buy chess sets. Taylor-Joy observed that her experience on “The Queen’s Gambit” actually prepared her to host “SNL,” saying, “If I get nervous, I’ll take a handful of green pills, follow the cue cards and look up.” She then looked up and envisioned a massive chessboard, featuring cue cards and chess pieces with cast members’ faces attached. She concluded the monologue by speaking in her native Spanish.

After her breakthrough with 2015’s “The Witch,” Taylor-Joy increased her star power in 2020 by not only starring in “The Queen’s Gambit,” for which she won the Critics Choice Award, Golden Globe and SAG Award, but the Oscar-nominated film “Emma.”