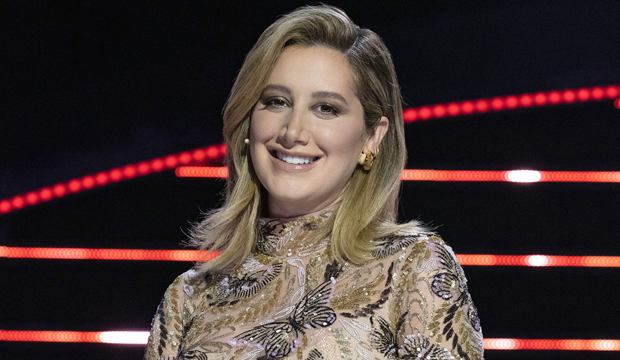 So far on “The Masked Dancer,” three of the judges have correctly guessed the identities of some of the costumed dancers. Ken Jeong named Bill Nye as Ice Cube, Brian Austin Green predicted Elizabeth Smart as Moth and Paula Abdul went with Brian McKnight as Cricket. That leaves Ashley Tisdale as the only “TMD” panelist to not throw out a correct guess … yet. Of course, there are still five masked twirlers in the competition, so Ashley has a chance to get on the board with a point before the winner is ultimately crowned. Scroll down for the updated list of judges’ correct guesses.

Ashley is a multi-talented actress and singer who first rose to fame in the “High School Musical” film series. More recently, she starred on television in “Carol’s Second Act” and on the big screen in “Scary Movie 5,” “Birds of Paradise,” “Amateur Night” and “Charming.” She’s released three solo album throughout her career: “Headstrong,” which entered Billboard’s 200 Chart at #5, “Guilty Pleasure” and “Symptoms.”

Despite her encyclopedic knowledge of pop stars and TikTok celebs, lightning hasn’t yet struck for Ashley on “The Masked Dancer.” Her first five incorrect guesses were Lionel Richie as Disco Ball (instead of Ice-T), Al Gore as Ice Cube (instead of Bill Nye), Jewel as Moth (instead of Elizabeth Smart), Ashton Kutcher as Cricket (instead of Brian McKnight) and Kevin Hart as Hammerhead (instead of Vinny Guadagnino).

Does her plethora of bad guesses make Ashley the Ken of “TMD”? Don’t forget, even though Ken has done reasonably well predicting this spin-off series, he was universally panned for his guesses on parent show “The Masked Singer.” He even received the nickname “Dead Wrong Ken Jeong” for his poor track record. Time will tell if Ashley can come from behind and prove her worth as an expert sleuth.