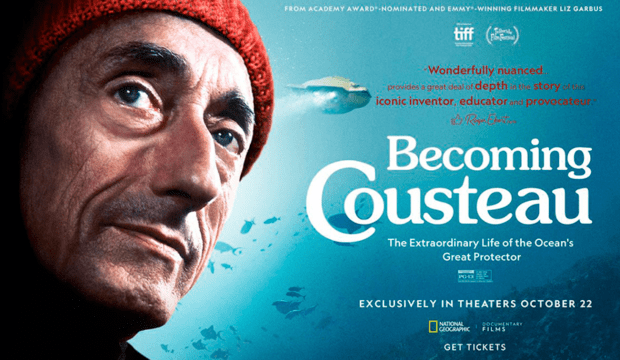 Who really was Jacques-Yves Cousteau?

For Baby Boomers and Generation Xers, Cousteau was part of the cultural universe. Not only did he take us on his explorations of life under on the sea on his beloved ship the Calypso, he and co-director Louis Malle mesmerized viewers with his Cannes and Oscar-winning 1956 documentary “The Silent World” (the first non-fiction film to win the Palme d’Or). He went on to win two more Oscars and 10 Emmys (from 40 nominations) for his television series and documentaries.  Cousteau also managed to find the time to write 50 plus books. He co-invented the revolutionary Aqua-Lung which allowed longer deep-sea dives, created the environmental advocacy group the Cousteau Society in 1974 and, five years before his death in 1997, addressed the historical first Earth Summit.

The new National Geographic documentary “Becoming Cousteau” from two-time Oscar-nominated filmmaker Liz Garbus (“All In: The Fight for Democracy,” “What Happened, Miss Simone?”) reveals just how complex and complicated an individual the adventurer was. “Becoming Cousteau” premiered to strong reviews at the Telluride Film Festival and has since played several other festivals including Toronto before opening in theaters on Oct. 22. Nominated for five Critics Choice Documentary Awards, “Becoming Cousteau” is also a strong candidate for an Oscar nomination.

The L.A. Times’ Robert Abele describes it as an “intriguing portrait of personal curiosity made professional, but how also maintaining that curiosity challenges and transforms the individual. But occasionally, the air is colored and salted by human complications, namely his neglectfulness as a husband and dad. His wife/business partner Simone comes off as a tough but lonely soul, while the participation of sons Jean-Michel and Phillipe in the family trade, brought swirls of joy, discord and sorrow to their dad as time went on.”

Garbus had a wealth of archives for her deep dive into Cousteau: 550 hours of material and rare footage of his films, words, and memories of his life, as well 100 hours of audio journals. “As I began the film, just the fact that Cousteau himself is not a household name seemed extraordinary to me,” Garbus told National Geographic. “Today’s generation has grown up with popular nature programs that highlight the wonders of the ocean, and they take these programs for granted as if we have always had them. It took a great mind, tremendous bravery, and a pioneering spirit to do what he did. Today, we are surrounded by imagery and technology that exist because of him. At the end of the day, the future of our species and the survival of huge swaths of biodiversity on the planet, will depend on innovation in the spirit of Cousteau.”

Though he was known as a fervid environmentalist, Cousteau’s adventures initially were financed by oil companies mapping undersea drilling locations. In fact, Garbus believes that in some ways he was an “accidental environmentalist,” pointing out that “he and his crew killed some of the creatures they met, and he pushed the limits of safety for his team in an effort to go deeper, further, longer.”

The documentary also offers a fascinating look at Cousteau’s first wife Simone Melchior (the mother of Philippe and Jean-Michel) who was obsessed with the sea and spent more time on the Calypso than her husband. She was given the nickname “The Shepherdess” and shied away from interviews and the camera. “Simone came from a family of sailors and Naval officers but being a woman in the first half of the 20th century, she was never allowed to dream of that,” Garbus noted. “She had to marry into it. Often, if you have to work extremely hard to get something, you cherish it in a way others don’t.  To be a woman and essentially be the co-captain of the most famous ship in the world at the time was extraordinary.” Still, by the time Simone died of cancer in 1990, Cousteau had fallen in love with Francine Triplet (more than 30 years his junior) with whom he had two children. They married in 1991.

By the 1960s, Cousteau’s explorations were subsided by his TV productions including the series “The Undersea World of Jacques Cousteau,” which aired on ABC from 1968-1976 and PBS’ “The Cousteau Odyssey” from 1977-80. The focus of both series changed as Cousteau and his crew witnessed the increasing catastrophes and losses in the natural world. Audiences, though, didn’t want to see these darker episodes and both series ended because of low viewership.

“Becoming Cousteau” vividly documents his sense of despair that he wasn’t doing enough to save the environment. “But he was also encouraged because an environmental movement was born, the beginning of climate consciousness, and he was a huge part of it,” Garbus noted. “What he hoped for most was that the next generation would pick up the baton. Jacques-Yves Cousteau was a key ingredient as to why our environmental consciousness occurred, and what those vital movements to protect the Earth have brought forward since.”