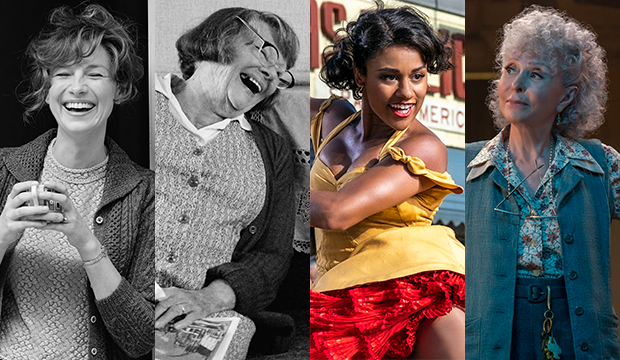 Best Supporting Actress has always been the Oscar acting category that’s kindest to having multiple nominees from the same film. There have been 35 instances of one film scoring more than one bid in the category, compared to 20 in Best Supporting Actor, 12 in Best Actor and just five in Best Actress. The category is also the only one of the four that has ever featured two pairs of double bids in the same year — and that could just happen again this year.

A long 72 years ago, in the 1949-50 race, the Oscars nominated four women from two films: Ethel Barrymore and Ethel Waters from “Pinky,” and Celeste Holm and Elsa Lanchester from “Come to the Stable.” The fifth nominee was “All the King’s Men” star Mercedes McCambridge, who won the supporting actress award and whom you could argue benefited from the double vote-split (“All the King’s Men” also won Best Picture and Best Actor for Broderick Crawford).

No two films have done the double-double in an acting category since, but this year’s supporting actress race stands a chance at ending that drought. The current predicted nominees are Kirsten Dunst (“The Power of the Dog”), Aunjanue Ellis (“King Richard”), Caitriona Balfe (“Belfast”), Ann Dowd (“Mass”) and Ariana DeBose (“West Side Story”). The last three are all competing alongside viable co-stars, but “Mass” is not expected to be a big Oscar player like “Belfast” and “West Side Story” are, and Dowd has been gradually slipping down the rankings since losing the stranglehold she had on the top spot since the summer (Dowd’s co-star Martha Plimpton is in 14th place).

But assuming that Balfe and DeBose are in, they could be nominated alongside their co-stars, depending on how big their films go over with the academy. And both of their co-stars just happen to be legends who have won this very category. Judi Dench, who plays Balfe’s mother-in-law in “Belfast,” is in 10th place, two spots behind Rita Moreno, who won for the 1961 version of “West Side Story” in the Anita role now played by DeBose and plays a new character, Valentina, the widow of Doc, in Steven Spielberg‘s remake.

Balfe and Dench have been in the mix since “Belfast” became a festival hit in the fall, but DeBose and Moreno have quickly rocketed up the rankings after “West Side Story” premiered to excellent reviews last week, with many singling out their performances. Moreno also has the additional narrative of returning to the race 60 years later in the same title for which she won her Oscar. With “West Side Story” opening on Friday, you can expect both to continue climbing. But all of these women getting in will not be easy, especially with Dunst and Ellis part of the current consensus top three with Balfe, so if all four make the cut, that means there’ll be a big snub.

Coincidentally, both “Belfast” and “West Side Story” could pull off another kind of supporting double-double: two nominations in both supporting categories. That was on the table for “Belfast” after Focus Features confirmed the film’s quartet of adults would campaign in supporting in October; at the moment, Ciarán Hinds is in second place in supporting actor and Jamie Dornan is in sixth. “West Side Story” has four supporting actor contenders from its ensemble cast, but its best chances lie with the leaders of the opposing sides of the turf war: David Alvarez, who plays Bernardo (the role that won George Chakiris the Oscar for the original), and Mike Faist, who plays Riff, both of whom give showstopping performances in what’s sure to be breakout film roles for the Broadway stars. Faist is currently in 13th place; Alvarez, 18th.