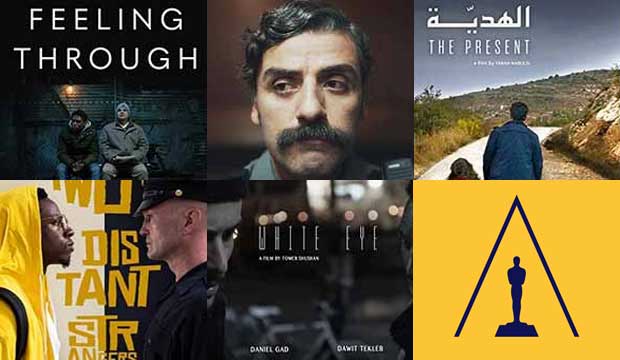 Our official racetrack odds have “The Letter Room” ahead at the Oscars in the race for Best Live Action Short. But could another one of this year’s nominees sneak in and pull off an upset? Is one of them more of a traditional fit for the Oscars? Below, let’s take a closer look at all five of this year’s nominated short live-action films.

“Feeling Through” – A deep bond develops between an at-risk teen and a deaf-blind man who meet on the streets of New York City.

“The Letter Room” – After an officer at a prison is transferred to the mail room, he begins to find himself engrossed in the very private life of one of the prisoners. Stars Oscar Isaac.

“The Present” – A man, along with his young daughter, in the West Bank must navigate soldiers, segregated roads and checkpoints in order to get his wife an anniversary present.

“Two Distant Strangers” – A cartoonist attempts to get home to his dog but is thwarted by a deadly meeting and is forced to repeatedly re-live the same terrible day.

“White Eye” – A man attempts to maintain his humanity when he tries to retrieve his stolen bicycle that is now in the possession of a stranger.

Voters have also tended to go for films with recognizable faces in them in more recent years. In 2018, “Skin” got some assistance from having Jonathan Tucker in it’s lead role and last year’s winner, “The Neighbor’s Window,” got an assist from Maria Dizzia starring in the main role. One of this year’s finalists fits that bill: “The Letter Room” (starring Isaac).