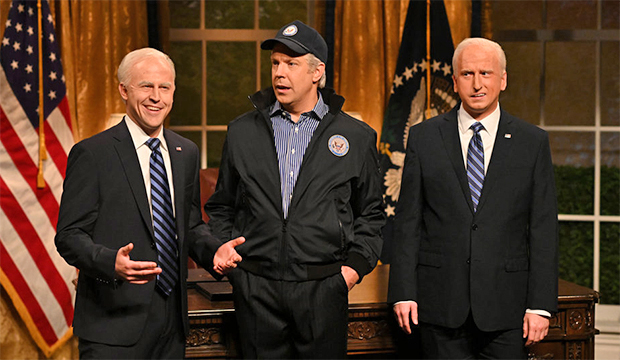 Joe Biden has been in government for close to 50 years now, and he continues to be a prime candidate for impressions. “Saturday Night Live” first spoofed the president in 1991, where Kevin Nealon played him in the Clarence Thomas hearings sketch. The sketch series made reference to the various Biden portrayers over the years on the recent episode on Oct. 23, where we saw Jason Sudeikis, Alex Moffat and James Austin Johnson all play their own versions of the politician. Who do you think is the best “SNL” Joe Biden impressionist? Vote in our poll:

Nealon’s take on Biden was deadpan, not necessarily leaning into any notable characteristics but he did manage to closely resemble the man. Following Nealon’s initial impression, it took 16 years before we saw a Biden impression on “SNL.” Sudeikis played the role from 2007-13, as Biden transitioned from Vice Presidential candidate to Veep under President Barack Obama. Sudeikis portrayed Biden with a pep in his step, eager, full of energy and a total bro with President Obama.

After Sudeikis left “SNL” in 2013, Biden was not portrayed on the show until September of 2019 when he began running for president. Woody Harrelson hosted the Season 45 premiere and spoofed Biden in a presidential debate, wearing some pearly white veneers. He reprised the role two more times before Sudeikis returned for a few episodes to take over. Host John Mulaney played Biden on one episode in 2020, without necessarily changing his own speaking voice.

Biden officially became the Democratic presidential candidate in the summer of 2020 and “SNL” lined up Jim Carrey to play him opposite Alec Baldwin‘s Donald Trump. Carrey leaned into Biden’s crotchety side, heavily wrinkled and grinning as he dueled with Trump in multiple debates. The comedian’s last appearance as Biden was the episode right after the 2020 election, in which Biden defeated Trump.

Moffat took over the role for two episodes last season, looking more smooth-faced and youthful than Carrey’s version. Johnson, a new addition to the cast this year, has now played Biden in multiple episodes, giving a little more nuance than past portrayals.