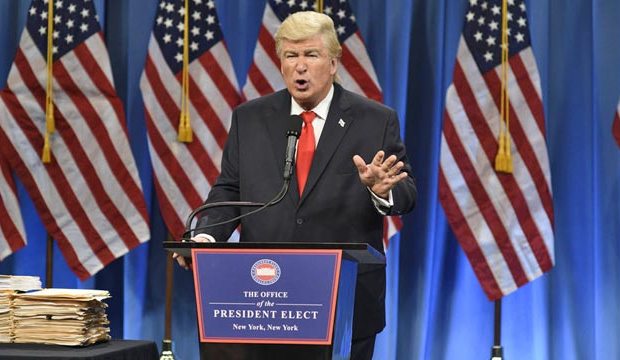 Donald Trump continues to be an easy target for spoofing on “Saturday Night Live,” even after he’s been out of office. The former president was first parodied way back in 1988 by cast member Phil Hartman, when Trump was still married to Ivana. About a decade later, Darrell Hammond took over and became the show’s definitive Trump impressionist until 2016. Alec Baldwin then started playing him ahead of the 2016 election and recurred all the way through his presidency. Recently, new cast member James Austin Johnson assumed the role with a scarily accurate impression. Who do you consider the best “SNL” Trump impressionist? Vote in our new poll here:

Hartman would play Trump four times from 1988-90, becoming more accurate in replicating his unique mannerisms and speech patterns with each sketch. Hammond briefly played him for a few episodes in 1999 before hitting his stride in 2004 with the arrival of Trump’s NBC reality show, “The Apprentice.” His version of Trump may have been slightly lower-key compared to the impressions we see today, but no less boastful and precise in playing into the businessman’s high opinion of his brand.

Taran Killam played Trump in three episodes in 2015, going in a more cartoonish direction with over-exaggerated gestures. While Hammond would return in early 2016 for several sketches, he was replaced over the summer in favor of Baldwin, largely due to the latter’s star power. Like Killam, Baldwin took on an over-the-top approach in his impression of Trump, mouth often agape, hands often gesturing. He won an Emmy for his performance in 2017 and earned two additional nominations during his tenure.

Johnson inhabited the role this November, just a few weeks into his first season on the show. While not exactly looking like Trump, his voice and mannerisms were spot on, and it won’t be a surprise if he reprises his impression in future episodes, based on the very positive audience response.

Over the years, there have been a handful of one-off Trump impressions from cast members like Jason Sudeikis, Leslie Jones and Vanessa Bayer, as well as guest host John Cena.