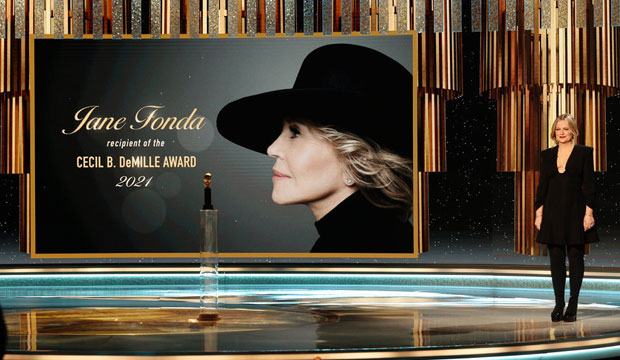 For we awards-obsessed writers and editors at Gold Derby, the Golden Globe Awards are the official launch of a season full of trophies. Ordinarily, we celebrate by gleefully (and sometimes snarkily) watching celebrities drink and mingle while fancy statues are handed out to the best in film and television by about 90 foreign journalists who make up the Hollywood Foreign Press Association. This year the Globes were handed out in a socially distanced virtual and bi-coastal ceremony hosted by comedy queens Tina Fey and Amy Poehler.

Even with the COVID-safe restrictions, the Globes still offered up lots of surprises and unforgettable moments. Below, read our collective thoughts on the glorious highs, embarrassing lows, and disastrous “WTF” moments of Sunday’s kudoscast for the Golden Globes 2021. And check out the complete list of winners here.

“Nomadland” wins Picture and Director. With its understated storytelling, “Nomadland” certainly didn’t seem like a typical Golden Globe film, especially compared to flashy contenders like “Chicago 7” and “Promising Young Woman,” but this is an indication that the film and Chloe Zhao have true staying power for the televised awards. – Kevin Jacobsen

Gotta love the Golden Globes throwing us some curveballs in the Oscar race. Love the surprise wins for underdogs like Andra Day, Jodie Foster and Rosamund Pike. Here’s hoping academy members were watching with ballots in hand. – Zach Laws

The HFPA did not select all-white winners. While this does not compensate for the overall lack of diversity, it was great to see them honor incredibly worthy Black talent, including Daniel Kaluuya for “Judas and the Black Messiah.” He is now most likely on his way to an Oscar victory! Also, the surprises. No one likes an awards season that goes completely according to plan, so seeing shocking upsets like Jodie Foster and Andra Day triumphing was a delight. Chadwick Boseman winning posthumously was both emotionally-draining and immensely satisfying. What a stellar performance he delivered, and what a beautiful, heartrending speech his wife, Taylor Simone Ledward, gave. He will deservedly sweep the season. – Luca Giliberti

Norman Lear and Jane Fonda classing up the joint with their pitch-perfect speeches made us temporarily forget what a mess this whole production was. Also, the TV comedy actor nominees trolling Tracy Morgan over “Sal,” my new favorite movie. – Joyce Eng

Taylor Simone Ledward gave the evening one of the few moments of true emotion and grief. She spoke for all of us who still mourn the loss of a man [her late husband Chadwick Boseman] who could have been one of the all-time greats. – Tony Ruiz

Tina Fey and Amy Poehler gave it their all as they tried to come together as hosts despite being separated by 3,000 miles and three time zones. Paul Sheehan

On the TV side, “The Crown” rightfully wins four Globes for its stunning fourth season. Nothing else comes even close to this immensely satisfying, compelling and gorgeous show. On the film side, I was reminded during Chloe Zhao’s historic win of that profoundly moving line from her film: “We don’t say goodbye. We say, ‘See you down the road.'” – Rob Licuria

The Hollywood Foreign Press took mere seconds to address the controversy about the absence of Black members in their organization. Jane Fonda had more of substance to say than the HFPA’s own members did. – Daniel Montgomery

“Promising Young Woman” had such a strong showing with four nominations but to not even walk away with a single win is rough. It’s even worse for “Mank” and its zero-for-six showing tonight. I’m guessing it’s the new “Irishman,” probably getting nominated for a bunch of awards but winning nothing. – Kevin Jacobsen

Don’t get me wrong, I was thrilled with Rosamund Pike’s surprise win for “I Care A Lot.” But that meant that the only “Borat 2” non-winner was ingenue and 2020 breakout star Maria Bakalova? Really? Read the room, HFPA. – Rob Licuria

The abbreviated reference to the recent controversy about the lack of Black voters in the HFPA. Paul Sheehan

While “The Crown” season four was spectacular and certainly deserving of its awards – especially for its leads Emma Corrin and Josh O’Connor – I am saddened once again to see the excellence that was “Ozark” season three completely ignored. I am still waiting for Laura Linney to pick up her first piece of hardware for her pitch-perfect performance. Also, at an awards show, consistency is key. Having the names read aloud by the presenters for some categories but not in others is confusing and unnecessary. – Luca Giliberti

Tina and Amy didn’t have any jokes or moments that people will be talking about tomorrow. Sure, they were good hosts. But they weren’t great. Bring back Ricky Gervais! – Marcus James Dixon

A comedy bit is only good when you know when to end it. – Joyce Eng

We have time for extended comedy bits but not enough time for acceptance speeches? C’mon, Golden Globes. – Zach Laws

Too many tech issues. Things started out rough with Daniel Kaluuya, the night’s first winner, being muted when he tried to give his speech. And what was going on with Catherine O’Hara‘s partner playing those screeching sounds on his phone? – Marcus James Dixon

Turning first responders into comedy props. You don’t honor the most important people in our nation by making them comedy sidekicks delivering bad movie and television puns. It was not just unfunny. It was belittling. – Tony Ruiz

There was plenty of time for comedy bits that mostly went nowhere, but halfway into the show the producers already started playing off winners during their speeches even though they gamely beamed into this show on webcam in the middle of a pandemic, including actors making sincere statements about democracy (Cohen) and mental health (Josh O’Connor). The word tacky doesn’t even begin to cover it. – Daniel Montgomery

The Golden Globes probably don’t have the budget of the Emmys, but it was a big step down in quality for the telecast, with awkward pre-commercial banter, playing people off, and dumb comedy bits. – Kevin Jacobsen

Uh, the entire production, which felt like it was haphazardly put together with Zoom links generated and sent out this morning. You know things are not going great when you’re longing for the press conference winners announcement from 2008. – Joyce Eng

They had a lot of time to produce this show and had the Emmys to look to for guidance, yet they managed to produce an inconsistent ceremony that was nowhere near as well-produced as the Emmys. Throwing in unnecessary, unfunny skits at the expense of lengthier, more heartfelt acceptance speeches is not the correct approach. Also, the HFPA took a total of 30 seconds to address the controversies surrounding its lack of diversity in its membership. It came across as insincere, forced and rushed, which is perhaps not the best approach when you are trying to convince the industry that you’re still a relevant awards group. – Luca Giliberti

Keeping the cameras on for the four also-rans as they watched the winner accepting the award. Paul Sheehan

Seriously though, you’re gonna cut Chloe Zhao off in the middle of a historic acceptance speech? Try doing that on the filler next time. – Zach Laws

Oh, heavenly and esteemed awards gods, with the power of a thousand suns, I beg of you to please ensure this travesty of an awards show is never repeated again. It was a technical disaster of severely unentertaining segments and sloppy technical gaffes from the opening frame to the closing breath. – Rob Licuria