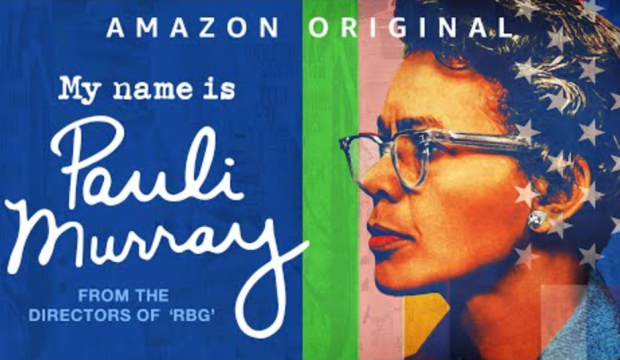 Pauli Murray is one of the most important figures of the 20th century. But it’s doubtful you ever heard of her. Fifteen years before Rosa Parks made headlines when she refused to move to the back of the bus in 1955 in Montgomery, Alabama, Murray and her friend turned a deaf ear to orders to move from a white only section of a bus in Virginia. When she was denied entrance in 1938 to the graduate school at the University of North Carolina, she wrote a protest letter to President Franklin Roosevelt. He may not have answered, but she became close to First Lady Eleanor Roosevelt, who received a copy of her first letter to FDR.

Murray, who died of cancer in 1985 at the age of 74, was also queer and non-gender conforming, a poet, the first African American to graduate from Yale law school with a doctorate, and the first Black woman to be ordained as an Episcopal. She is now the subject of the Amazon Studios documentary “I Am Pauli Murray,” from “RBG” and  “Julia” filmmakers Betsy West and Julie Cohen.

The Washington Post enthused that the film “delivers a lively, revelatory litany of all things Murray got right first, in a career that was driven by equal parts intellectual curiosity and a call to serve. As Brittney Cooper, a Rutgers University associate professor explains to her class in the film, ‘I can’t being to cover all her accomplishments and all her dopeness.” The filmmakers recently discussed “Pauli Murray” during a recent Zoom conversation.

“This was a person who had such a profound impact on the Civil Rights movement, the women’s rights movement and LGBTQ issues,” said West as to why she and Cohen pursued a documentary on Murray.  “Someone who was an extraordinary writer and yet why didn’t we know [her]? I think that was the intriguing question. Then we said ‘Well, might it be possible to do a documentary?’’’

They quickly found that Murray left behind a treasure trove of archival material including 141 boxes of writings. The directors pointed out some of those boxes contained “dry legal papers,” but there were personal and intimate journal writings and letters and more than 800 photos both of and shot by Murray. “And then there was more than 40 hours of treasures of audio tapes of Pauli doing oral histories, doing interviews, doing kind of a lifetime worth of work,” noted Cohen. “When someone’s showing up at Pauli’s house to do an interview, Pauli pulls out a tape recorder, double records, saves it and makes sure it all ends up in an archive, really amazing this collection of material that made it tell the story in a really vivid way.”

West believes Murray deliberately saved everything. “She had a sense of history and Pauli’s own importance in history and made sure it went to the Schlesinger Library at Harvard, where it all is.  In order to get access really our first step was to go to the Pauli Murray Foundation and talk to them about our idea and talked to Paul Murray’s grandniece who is in the film and explain what we wanted to do and to secure permission from them to be able to work on a documentary that would use this extraordinary material. “

Though Murray died 36 years ago, her story seems very significant today. “We started making this film in 2018,” said Cohen. “Many of the issues Pauli wrote about and worked on ….as far as rights for African Americans, women’s rights, LGBTQ rights, all of those grew perhaps sometimes painfully more relevant in the three years that we were working on the film. I mean, these are perennial American issues that in some ways don’t seem to be going away. It’s amazing how many things Pauli was fighting for 50 years ago still need to be fought for today.:”

West added that the duo learned much about the “connections between what Pauli was doing back then and today. One of the things was learning about the co-called Detroit Riots, the so-called race riots which, of course, Pauli wrote a scathing poem about, protesting the president’s reaction to what was really police and white violence against African Americans without over a dozen people murdered-something we didn’t learn about in our history books. During Black Lives Matter, it just felt so resonant. “

One of the hardest aspects of the documentary, said West, was coming to “grips” with “Pauli’s private struggle with gender because it’s revealed in the letters Pauli wrote to doctors saying ‘I believe I’m a man.’ When Pauli reached out to doctors and said  ‘Can you help me?’ They were like ‘Terribly sorry. Go away. Nothing we can do,’ which is a very painful chapter.”