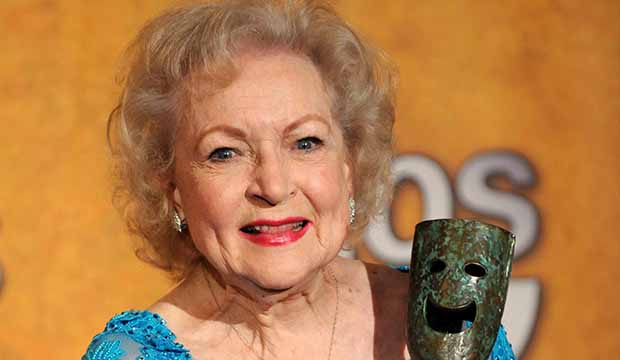 Betty White, commonly referred to as “The First Lady of Television,” celebrates her 99th birthday on Sunday, January 17. The five-time Emmy winner for Primetime roles has been a mainstay on television screens for longer than even the medium itself. Her more than 80-year career on the small screen remains the longest of any performer in the history of TV.

White began appearing in television while it was still in its infancy, appearing on an experimental program in 1939. After years of working in radio, she served as co-host of “Hollywood on Television” in 1949, a gig that required White to ad lib for most of the show’s five-hour running time. Her first series was 1953’s “Life with Elizabeth,” which earned White a regional Emmy Award.

White’s greatest success came during seventies and eighties with the actress starring on not one, but two classic sitcoms. White played the mischievous and man-hungry Sue Ann Nivens on “The Mary Tyler Moore Show” from 1973 until the series ended in 1977, winning Emmys for Best Comedy Supporting Actress in 1975 and 1976. She struck gold again with her role as “grade-A Minnesota chucklehead” Rose Nylund in “The Golden Girls.” White earned seven consecutive Emmy nominations for Best Comedy Lead Actress, winning in 1986. She won an additional Emmy in 1996 playing an exaggerated version of herself on “The John Larroquette Show.” With this win, White became the first, and to date, the only female performer to win Emmys in each acting category for comedy.

We love both of her regular gigs so much, Gold Derby has ranked our favorite episodes of “The Mary Tyler Moore Show” and the greatest installments of “The Golden Girls.” Tour both photo galleries by clicking the links in this paragraph.

After several failed series and a number of guest appearances, White had something of a career resurgence with her hosting gig on “Saturday Night Live.” Her wildly popular appearance, the result of a massive campaign on Facebook, earned her a fifth career Emmy. She followed that with yet another hit sitcom, starring as cranky caretaker Elka Ostrovsky on TV Land’s first scripted series “Hot in Cleveland.” The series ran for six seasons and White earned another Emmy nomination for Best Comedy Supporting Actress as well as two SAG Awards for Best Comedy Actress.

White has also been a fixture on Daytime Television throughout her career, making regular appearances on classic game shows like “To Tell The Truth,” “Match Game” and “Password.” It was on the latter that White met her future husband, the show’s host Allen Ludden. White even won a Daytime Emmy as Best Game Show host for the short-lived “Just Men!” making her the first woman to win in that category. That gives her a total of seven Emmys across Primetime, Daytime and regionally. She is an inductee of the Television Academy Hall of Fame and received a life achievement award from the Screen Actors Guild.