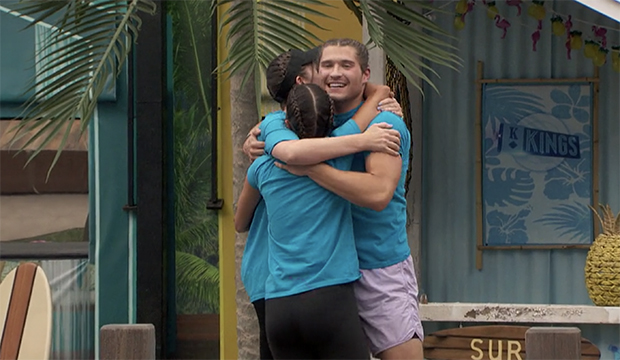 The “Big Brother” house briefly came together last week to unanimously evict Brent Champagne, which left only 13 players left in the game. Christian Birkenberger then took power for the Kings by winning the fourth Head of Household competition of the summer. That meant his teammates Alyssa Lopez, Xavier Prather and Sarah Beth Steagall would sail through the week unscathed. Last week the Kings had floated the idea of targeting Whitney Williams or Hannah Chaddha should they win, since they had no allegiance to them. Is that what Christian ultimately decided to do with his HOH power?

Below, read our minute-by-minute “Big Brother” recap of Season 23, Episode 10 to find out what happened Sunday, August 1 at 8:00 p.m. ET/PT. Then be sure to sound off in the comments section about your favorite “BB23” houseguests on CBS’s reality TV show, who annoys you the most and who you think will ultimately join the “Big Brother” winners list. Here are the current team breakdowns:

8:00 p.m. – “Previously on ‘Big Brother’!” In the 10th episode, Brent earned the distinction of receiving the first unanimous vote of Season 23 when even his own Aces turned against him. “I was going to create a lot of havoc in the house,” he told Julie Chen Moonves during his exit interview about why he thought he was ousted. The teams then took part in a “Pier Pressure” HOH competition with Christian winning for his Kings. Who will the 23-year-old general contractor nominate for eviction? Let’s go!

8:03 p.m. – Christian’s HOH win secured safety for the only four-member team left in the game, the Kings. This was a crucial win considering the three other teams all had their sights on sending one of them home in order to even the playing field. That being said, King Xavier would have to work his magic in order to protect his Cookout alliance member Hannah from seeing the block.

8:05 p.m. – The loss was a frustrating defeat for Derek and Azah who began to anticipate that the Jokers would be nomination targets once again, knowing that they haven’t had strategic conversations with Christian yet. The Queens members felt much more safe under the protection of the Royal Flush alliance, but Queen Claire would be competing in the Wildcard comp and believed she should win it or be vulnerable to going up as a pawn. Aside from the Queens, Derek X. is also in the Royal Flush, as the only Ace, and faced a week where he’d be torn between sticking with that alliance or sticking his neck out there to protect his fellow Aces Hannah and Whitney.

8:09 p.m. – In a team huddle, Christian and the Kings discussed keeping their original plan of putting Whitney and Hannah up. Alyssa floated the idea of targeting Hannah instead of Whitney because everyone wants Whitney out so why not save her to remain a target next week and getting rid of a smart player like Hannah out now. Sarah Beth was on the same page as Alyssa, but this was exactly the hot water that Xavier was afraid of getting into this week. In the circumstance that Whitney wins the Wildcard and saves all the Aces, Christian acknowledged to the group that he’d probably have to nominate Jokers Azah and Britini instead.

8:17 p.m. – Derek X. opened up on the hammock to Azah, Whitney and Sarah Beth about his childhood loneliness as a child of immigrant parents and the cultural value differences that it created between him and his parents. He went on to explain that his journey on the show is partly to help depict Asian heritage men in a different light than he saw on television growing up.

8:19 p.m. – For the fourth Wildcard comp, Claire and Whitney were slated to compete for the Queens and Aces, respectively, as the only eligible players from their teams. On the Jokers, Azah and Derek F. were both eligible, but they put Azah forward as the most promising of the two to beat Claire and Whitney.

8:25 p.m. – Entering the comp, all three players were determined to win in the hopes that they’d be able to provide their entire team safety and protect them from becoming the first team to be narrowed down to two players. To win they had to roll a ball across a balancing platform toward a slot at the end with the hazard that every so often the lights in the room will flicker. None of the women were confident about their skillset to win, but Claire looked strongest to get the bar far while Azah moved so steadily that her ball barely moved at all. Frustrated started to settle in for Whitney who dropped her ball early on the platform every time at the same time that Claire was reaching the end of the platform on multiple attempts as the second flickering blackout hit. On Claire’s third trip to the end of the platform, she finally banked the ball in the slot and won the comp!

8:38 p.m. – Noting that she “adores” her fellow teammates so much, Claire decided to take safety for just herself. Later in the Diary Room she told us that as a huge fan it was an obvious choice to not pass up the opportunity to put herself on the jury. Kyland and Tiffany congratulated her later with sincere happiness, but that was easy for them to do this week believing in the Royal Flush alliance and their own safety with Christian anyway.

8:41 p.m. – Christian brought the Queens and Kings into the HOH room later to discuss who the Royal Flush should target this week. He said that Whitney is his main target, thinking that she’d definitely aim at getting him out of the week when given the power. Sarah Beth made another argument to go after Hannah instead as the overall bigger threat to win comps and having influence over more people in the house. Tiffany countered with Britini as a threat, but Sarah Beth saw the red flag that so many people in the alliance are prepared to fight for Hannah. By the end of the conversation, everyone was urging Christian to make the decision between Hannah, Britini and Whitney that is best for him and that they’d all support him.

8:49 p.m. – To help make his decision, Christian met with the Jokers with the rest of the Kings present. He mentioned to them the Aces were already the team to mutiny on their own player (Brent) last week. The Jokers all put Whitney’s name forward as the one that should be the target, but Derek F. took it one step further by saying that she specifically said the Kings would have been her target. After the conversation, Christian and Alyssa pointed out that if all of the Queens and all of the Jokers want Whitney out then why would they do what’s beneficial for those teams instead of going after Hannah instead? But before he could put the target squarely on Hannah, he pulled her for a one-on-one with the idea that she’d potentially go up as a pawn against Whitney. Hannah made the argument that he’s a big target in the house and that if she wins HOH next week she will not put him up, but Azah and Britini likely wouldn’t promise him that same thing. Christian heard that argument loud and clear and began second-guessing what he’d do.

8:57 p.m. – At the nomination ceremony, Christian unveiled Whitney and Hannah as his nominees. He told them that had the Kings not won HOH then he believes their team would have came for him and his team. The nominations left time for he and the rest of the house to decide which of the two should be their target, while Hannah was determined to win Power of Veto and the following HOH with the intention of coming after Christian and Alyssa. Whitney, well she was confused as to why she was even a target to be nominated.