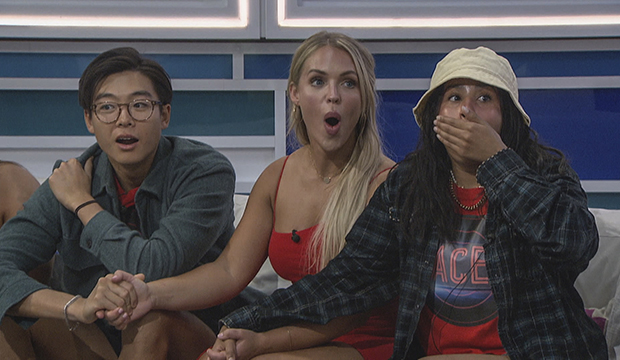 The Aces took another hit on Thursday’s episode of “Big Brother” when either Whitney Williams or Hannah Chaddha was evicted live. That left their team with only two players, compared to four for the Kings and three each for the Queens and Jokers. Head of Household Christian Birkenberger had made it clear that Whitney was his target, but Sarah Beth Steagall was adamant that Hannah was the stronger player. So how did the house vote on August 5? And who ended the evening with a one-on-one conversation with Julie Chen Moonves?

Below, read our minute-by-minute “Big Brother” recap of Season 23, Episode 13 to find out what happened Thursday, August 5 at 8:00 p.m. ET/PT. Then be sure to sound off in the comments section about your favorite “BB23” houseguests on CBS’s reality TV show, who annoys you the most and who you think will ultimately join the “Big Brother” winners list. Here are the current team breakdowns:

8:00 p.m. – “Previously on ‘Big Brother’!” In the 12th episode, Whitney and Hannah played their hearts out in Veto comp, but Christian ended up winning by being the first person to rally his volleyball back and forth 100 times. When Whitney heard Derek X alluding to the fact that she wouldn’t be there next week, she blew a gasket and decided to throw him under the bus to Christian, saying he was a much bigger threat than she was. Unfortunately, Christian had no intentions of going after his “Ace up the sleeve” in Derek X. But enough about last night, let’s get to the eviction!

8:10 p.m. – Following the Veto meeting, Christian confirms that Whitney remains his target this week. Hannah is confident she has the numbers to stay, but she’s worried people are starting to realize how analytical she can be. It seems pretty clear that everyone thinks Hannah is the better player, so it’s odd Whitney is the obvious target. Meanwhile, Tiffany and Hannah have been growing closer and even formed a final two deal. Another duo growing closer is Sarah Beth and Kyland. They formed the “Too Sweet” alliance and at this point, Sarah Beth really doesn’t trust anyone besides Kyland. But Kyland would choose the Cookout over Sarah Beth.

8:15 p.m. – Tiffany approaches each player in the Cookout to explain her plan to get them all in the final six. She’s a total mastermind and the plan is brilliant, but will the Cookout appreciate her for coming up with this? Or just see her as a huge threat who needs to go first once they’ve all made jury?

8:20 p.m. – Tiffany says “Good morning” to Kyland, Xavier and Sarah Beth and their response of silence is “off putting” to her. She tells Kyland that she’s annoyed by them. He apologizes and comes to Sarah Beth’s defense, which just bothers Tiffany even more. Tiffany wants Sarah Beth GONE! Later, Azah and Tiffany discuss another plan to ensure a King goes home next week. But cracks begin to form in this Cookout when Azah explains she doesn’t trust Hannah. By default, Azah now doesn’t think she can fully trust Tiffany either. Yikes!

8:25 p.m. – Whitney approaches Alyssa to make a last-ditch effort to stay. She tells Alyssa that if Hannah stays she will definitely target Christian and Alyssa. I love how hard Whitney is campaigning, but her fate is sealed. Alyssa runs to tell Christian that Hannah can’t be trusted, which makes Christian wonder if they should evict her this week instead.

8:35 p.m. – It’s time for the live vote and eviction! After a couple of polite speeches from the nominees, Whitney is evicted by a vote of 10-0 over Hannah.

8:50 p.m. – Julie rallies the players in the living room to let them know that the team twist is officially over! It’s every person for themselves now and the news comes just in time for another HOH competition. Now that the team twist is over, so is the Wildcard competition. So things are about to get a lot more “old school” in terms of gameplay. That should make some people very nervous, particularly players who aren’t good at competitions and have relied on teammates to win them safety.

8:59 p.m. – It’s the first HOH competition without teams and the first endurance competition! Now that teams are not in play, this win is more important than ever. As the outgoing HOH, Christian is not eligible to compete. He looks extremely nervous about that. The competition is a familiar one, with houseguests holding on to a wall that tilts, shakes and will likely get them a little wet over the next couple hours. Let’s hope it lasts that long anyways! Julie signs off by saying the results will be revealed on Sunday’s episode, but if you have Paramount+ you can tune in and watch live right now!