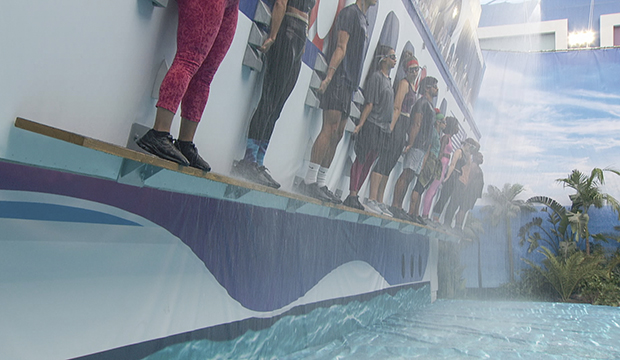 The first endurance Head of Household competition began during last Thursday’s live episode, with 11 houseguests holding on for dear life. Whoever lasted the longest in the “Whale of a Time” HOH comp would earn the power to nominate two people for eviction. And, for the first time this season, everyone was eligible to be nominated (aside from still-safe Claire Rehfuss) because the team twist was over. So who ended up winning the fifth Head of Household comp of “BB23” and which two contestants did they put on the block?

Below, read our minute-by-minute “Big Brother” recap of Season 23, Episode 14 to find out what happened Sunday, August 8 at 8:00 p.m. ET/PT. Then be sure to sound off in the comments section about your favorite “BB23” houseguests on CBS’s reality TV show, who annoys you the most and who you think will ultimately join the “Big Brother” winners list. The remaining players are: Alyssa Lopez, Azah Awasum, Britini D’Angelo, Christian Birkenberger, Claire Rehfuss, Derek Frazier, Derek Xiao, Hannah Chaddha, Kyland Young, Sarah Beth Steagall, Tiffany Mitchell and Xavier Prather.

8:00 p.m. – “Previously on ‘Big Brother’!” In the 13th episode, Whitney Williams was unanimously evicted over Hannah, leaving only 12 people still in the running to win the $750,000 prize. “The men are scared of women having the control in the house,” Whitney said to Julie Chen Moonves about why she thought the house targeted her. In reality, the Royal Flush alliance was in control of the numbers and they thought Whitney was the bigger target. But enough about last week — let’s get to the HOH competition!

8:03 p.m. – With the team twist over, the endurance comp for HOH put everyone in position to consider how badly they need to win in order to secure their own safety. Christian was rooting for Alyssa because he knew it’d keep him safe whereas Xavier was simply thinking that he’d be safe with everyone and wouldn’t need to win. Derek F. wanted to win and aimed to win, but unfortunately he was the first to fall from the wall, leaving himself hoping that another member of The Cookout win so that he could feel safe.

8:06 p.m. – The next to fall (at 29 minutes) was Claire. She was struggling to stay on, but knew that her safety until jury meant she didn’t need to win and so bowing out was the best option for her. Soon after, Sarah Beth voluntarily dropped as well, thinking she’d be safe with most people as HOH, and then Hannah slipped off. Despite his own best efforts to stay in, Kyland fell off at 53 minutes and then Britini followed 10 minutes later, leaving Tiffany, Xavier, Derek X., Alyssa and Azah as the remaining 5.

8:13 p.m. – At this point Tiffany’s only concern in the comp was to last longer than Alyssa, thinking that she’s the only person not in the framework of her plan to get all six members of The Cookout to the end of the game. When Azah fell next it was with the hope that Tiffany or Xavier would pull out the win, but unfortunately a minute later Tiffany fell, leaving Alyssa as one of the remaining 3.

8:15 p.m. – With three on the wall still, Xavier was figuring out when would be the right time for him to throw the comp to one of the other two at the same time that Alyssa was turning to Derek X. and asking him to drop with the promise that she wouldn’t nominate him or Hannah. Derek X. was set on winning it for himself though with a plan to make a power move before anyone else in the house could have the opportunity to do so. Shortly after her failed deal, Alyssa fell in a wave of personal disappointment and frustration that Derek didn’t throw it to her. Before Xavier enacted his plan to throw the comp he struck a deal with Derek to promise not to put him up while in the back of his mind thinking that with this win Derek would be putting a huge target on his back as a two-time Power of Veto winner and now an HOH winner, too.

8:23 p.m. – Ahead of him as HOH, Derek X. had only one decision to make: easy way out by nominating two Jokers or making a big move and going after a power player. The biggest celebrator alongside him was Hannah, his closest ally with a plan of her own to be in his ear all week about who should go. He immediately admitted to her that he promised to Xavier that he wouldn’t nominate any of the former Kings but that was not what Hannah wanted to happen after Sarah Beth repeatedly threw her under the bus last week. That being said, Sarah Beth clued us in to a “clearing of the air” that she had with Hannah earlier in the day to smooth over anything Hannah may have heard about that.

8:27 p.m. – Later, Derek X. told Tiffany and Claire that the only promises he made is to Alyssa and Xavier to keep them off the block, but that the deal with the former Kings was something Xavier asked for that he never promised. Derek’s sights soon turned specifically to Christian as a backdoor option, which he communicated to Tiffany and Hannah. Tiffany said, in front of Hannah, that he can only backdoor a member of the Royal Flush, not realizing that Hannah knows nothing about that alliance. Once Tiffany left, Hannah immediately asked Derek about the Royal Flush to which he was honest about the membership, but dishonest when he said that after this week it won’t exist. Later, Hannah went back to Tiffany to ask who started it and Tiffany didn’t even realize she had spilled the beans about it! Like Derek, Tiffany downplayed the seriousness of the alliance, but Hannah knew that two of her closest allies kept major information from her and that she could save it as ammunition for the future.

8:38 p.m. – Derek F. coached Azah through “faking it til you make it” in order to help her cover up the fact that her face always displays her inner feelings, like when she’s mad (which according to her is all the time). This was a good glimpse into Azah’s line of thinking as one of the admitted emotional players in the house.

8:40 p.m. – Derek X. met with Xavier privately to clarify that he stands by his deal with Xavier and Alyssa made on the wall to keep them safe, but backtracked from giving safety to Christian and Sarah Beth as well. That was confusing to Xavier who was under the impression that every member of The Royal Flush should be safe anyway. Derek X. did ask Xavier what’d he do if he had to go after a King and Xavier said that keeping Christian in the game is beneficial to both of them because it keeps a bigger target ahead of them. In another chat, Sarah Beth shied away from going up as a pawn this week and told Derek X. that she’d be upset if that happened.

8:49 p.m. – The Dereks met later in the day with Derek X. now asking Derek F. if he’d be willing to go up as a pawn, but Derek F. suggested that a female pawn would be better. That pushed him to ask both Azah and Britini if they’d be willing, to which Azah said no straight away and Britini said that she does not want to go up because the more she becomes a pawn the more likely it is that the house sends her home. That being said, Britini said that if she goes up she’d be most comfortable sitting next to a King. His final conversation with Hannah amounted to her saying that Christian is going to come after Derek X. sooner rather than later and that he should go after him first. Hannah also pushed him to use Sarah Beth as a pawn because ultimately it would be beneficial to Hannah’s own game if Sarah Beth became the plan B option.

8:57 p.m. – At the nomination ceremony, Derek X. named Sarah Beth and Britini as his choices to go up on the block. He explained that they are his best option for her personal game and his aim to maintain the trust he has in the house. The nominations were a shock to Britini (up for the third time) and to the entire Royal Flush alliance that didn’t expect Derek X. to take a shot at the alliance so early.