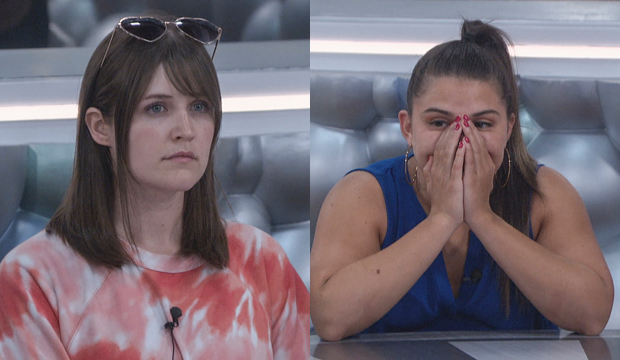 Heading into the August 11 episode of “Big Brother,” Head of Household Derek Xiao had just nominated Sarah Beth Steagall and Britini D’Angelo for eviction. It was Sarah Beth’s first time on the block and Britini’s third (cue the tears). Derek X’s real target, however, was Christian Birkenberger, but the HOH kept him safe for now because he didn’t want to give the former King a chance to save himself in the Veto competition. So who ended up winning the Power of Veto? And did Derek X’s backdoor plan come to fruition?

Below, read our minute-by-minute “Big Brother” recap of Season 23, Episode 15 to find out what happened Wednesday, August 11 at 8:00 p.m. ET/PT. Then be sure to sound off in the comments section about your favorite “BB23” houseguests on CBS’s reality TV show, who annoys you the most and who you think will ultimately join the “Big Brother” winners list. The remaining players are: Alyssa Lopez, Azah Awasum, Britini D’Angelo, Christian Birkenberger, Claire Rehfuss, Derek Frazier, Derek Xiao, Hannah Chaddha, Kyland Young, Sarah Beth Steagall, Tiffany Mitchell and Xavier Prather.

8:00 p.m. — “Previously on ‘Big Brother’!” In the 14th episode, the “Whale of a Time” endurance comp played out with Derek X, Xavier and Alyssa as the final three standing. In order to get the two former Kings to step down, Derek X promised both of them safety. That left two Kings still eligible to be nominated: Christian and Sarah Beth. Derek X ended up putting Sarah Beth on the block next to a pawn, Britini, with the ultimate goal being to nominate Christian through the backdoor. Enough recap — let’s start tonight’s episode!

8:10 p.m. — Following the nomination ceremony, Derek X. confirms in the Diary Room that both his nominees are pawns. Sarah Beth is surprised to be on the block and runs into Kyland’s arms. Britini immediately runs to her room to cry. She hits the block a lot and cries a lot. Tough season for Britini. Meanwhile, the Kings gather together to talk smack about Derek X. and listen to Sarah Beth whine about potentially being sent home on her birthday. Apparently if you’re fortunate enough to have a birthday while in the “BB” house you can expect safety? Later, Sarah Beth goes and sits with Derek, and I mean sits in uncomfortable silence for at least three minutes before a word is spoken. Finally Derek X. tells Sarah Beth that she’s not the target and he’s going after Christian. She’s shocked, but as long as she’s safe it’s cool with her.

8:15 p.m. — Derek X. meets with the rest of the Kings to convince them that Sarah Beth is not his target. He wants them to believe Britini is the target, but he didn’t want to put two Jokers up. The Kings believe him and think Britini will be heading home this week.

8:20 p.m. — Alyssa and Claire both tell Sarah Beth they will use the Veto on her if they win. At this point, of course, Alyssa has no idea her boyfriend would be the replacement nominee. Now, it’s time to pick players for the Veto competition! Joining Derek X., Britini and Sarah Beth in this contest are Alyssa (drawn by Derek), Claire (drawn by Sarah Beth) and Kyland (drawn by Britini). The cards are stacked in Sarah Beth’s favor. If she doesn’t win the Veto herself, four of her competitors have promised to use the Veto on her.

8:30 p.m. — It’s time for the Veto competition! The backyard is decked out like an 80’s gym. The players will hop from one piece of equipment to the next and whoever does the least reps will be eliminated. Upon elimination, they will choose one of six prizes, including the Veto. Each person eliminated can steal the prize taken by a previously eliminated player or keep their new one. Claire is ousted first and awarded the golden Power of Veto…for now. Sarah Beth loses round two by one rep to Britini. Her 5th place locker contains $5,000, which she keeps, knowing someone else will take the Veto. This pisses off Alyssa, who is not interested in working her ass off just for Sarah Beth to keep her $5k. Meanwhile, Big D. is up on the balcony sweating as he watches Kyland thrust his hips from one round to the next. Unfortunately for Kyland, Sarah Beth and Big D., Kyland is eliminated next, winning a unitard punishment. He hands it to Claire and claims the Veto. Three players remain.

8:35 p.m. — At the end of round four, Derek X. is eliminated. He wins a jackass costume, but says he wants to take the $5k from Sarah Beth. She immediately starts crying and begs him not to. How pathetic. Derek lets SB keep the money and takes the Veto, giving Kyland the jackass uniform. Foolish move. What does Derek have to feel bad about? She’s not even the target. The whole interaction would have made me vote to evict Sarah Beth.

8:45 p.m. — The final round is underway and Britini is absolutely ferocious in her quest for victory. She wins the Power of Veto competition and couldn’t be more pumped. Alyssa receives a smartphone and laptop which allows her to communicate with a loved one. She keeps the prize. Britini wins “Lord of the Latrine,” which gives her the only key to the bathroom. The bathroom will be locked for 24 hours and anytime someone has to use the bathroom, she must escort them. She trades that in for Derek’s Power of Veto and will now take herself off the block. Despite being the new Lord of the Latrine, Derek X. is thrilled with the results and can’t wait to throw Christian on the block next to Sarah Beth.

8:55 p.m. — Derek X. shows off his new Lord of the Latrine costume. As each houseguest enters the toilet, Derek will also announce to the rest of the house who has arrived to the bathroom. This is actually really funny. There are still a lot of people in this house! There are a lot of bathroom breaks. After six hours Derek is tired of this punishment, but it’s still fun to watch. The next morning, Derek decides to try to salvage his relationship with Alyssa by informing her that he plans to backdoor Christian. Alyssa tells Derek that Christian is not going after him and it’s a stupid move. She immediately tells Christian and he’s fuming. Christian now feels like an idiot for not backdooring Derek last week. Xavier also makes a pitch for Derek to keep Christian off the block. Now Christian joins this conversation, making it super awkward. Derek asks to talk to Sarah Beth alone. She tells him they’re already going to to go after him so he has to take the shot at Christian now.

8:59 p.m. — It’s time for the Veto meeting. In a last ditch effort, Christian pulls Derek into the storage room and makes various threats to stop Derek from putting him on the block. Christian thinks Big D should be the the replacement nom instead. Now Derek X. isn’t sure if the wants to follow through on this backdoor plan. And just like that, the episode ends without showing us the Veto ceremony! We will have to wait until tomorrow night.