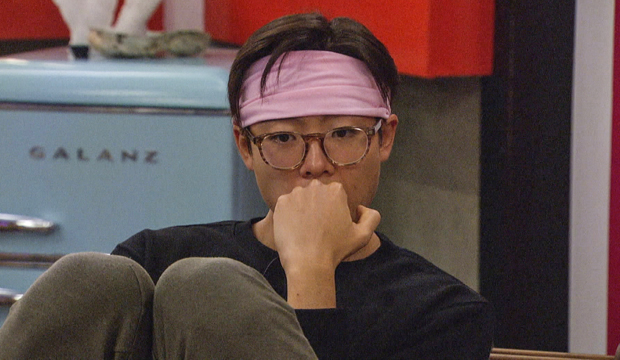 For the first time all season, “Big Brother” finally had viewers guessing heading into a live eviction night. Veto champion Britini D’Angelo was set to remove herself from the chopping block, which would open the door for Head of Household Derek Xiao to put his backdoor plan into fruition and nominate Christian Birkenberger alongside his former King teammate Sarah Beth Steagall. Would the house take this opportunity to evict one of its strongest competitors? And how did the subsequent HOH comp play out, hosted by Julie Chen Moonves?

Below, read our minute-by-minute “Big Brother” recap of Season 23, Episode 16 to find out what happened Thursday, August 12 at 8:00 p.m. ET/PT. Then be sure to sound off in the comments section about your favorite “BB23” houseguests on CBS’s reality TV show, who annoys you the most and who you think will ultimately join the “Big Brother” winners list. The remaining players are: Alyssa Lopez, Azah Awasum, Britini D’Angelo, Christian Birkenberger, Claire Rehfuss, Derek Frazier, Derek Xiao, Hannah Chaddha, Kyland Young, Sarah Beth Steagall, Tiffany Mitchell and Xavier Prather.

8:00 p.m. — “Previously on ‘Big Brother’!” In the 15th episode, Derek X nominated Sarah Beth and Britini for eviction, but then he spilled the beans to SB that his real plan was to backdoor Christian. At the Veto competition, Britini defied the odds and claimed the golden power, while other players received punishments. Derek X became the “Lord of the Latrine” for 24 hours, which meant he had to unlock the bathroom whenever someone needed it. Before the Veto meeting, Christian pleaded for Derek X not to nominate him, but the episode ended with a cliffhanger and we didn’t see Derek X’s decision. Let’s get to the live episode!

8:05 p.m. — After last night’s cliffhanger, expect tonight’s episode to be fast and full of drama! I have to give Christian credit, he’s working HARD to keep himself in the house and that’s not always the case with some of these players. Julie promises the Veto meeting will set the stage for what could be the biggest move of the summer. So let’s get to it! We pick up where the Veto meeting left off and Britini has predictably saved herself. Derek X. takes his place in the front of the living room and puts Christian on the block. It’s on! Derek says it’s no secret that Christian is a “large, competitive threat to everyone in this room.”

8:10 p.m. — Christian calls Derek a coward for putting him on the block (that’s how the game is played). Christian still thinks he can swing the house to vote in his favor. Sarah Beth is thrilled to be sitting next to him and thinks if she just lays low she will stay in the house. Derek F. (Big D) gives Christian a hug and is immediately told he could be the swing vote. Big D wants to check in with the Jokers and the Cookout before he makes any decisions. Awkwardly, Derek X. still has to accompany everyone to the bathroom, including Christian. During their bathroom break, Christian tells him that Sarah Beth is orchestrating everything, is selfish and cried to keep her $5k. As Xavier joins the conversation, Christian pleads for safety, once again telling Derek he’s his shield. Then Derek blows his horn and announces Christian is using the porcelain throne, lol.

8:18 p.m. — Claire received a punishment in the last Veto competition and will now wear a costume that forces her to play 52-card pickup with herself whenever the King demands. Next, Kyland is outfitted in his punishment, a jackass costume. He also has to make a club sandwich for anyone the King demands, whenever the King demands. Loving the costumes, but let’s get back to the drama. Tiffany chats with Christian and says his nomination was a shock to everybody. She doesn’t understand why Sarah Beth looks so relaxed, but then Christian says Tiffany and Claire worry him more than anyone. He thinks Tiffany’s hug felt like a “goodbye hug.” Tiffany says she’s concerned because she doesn’t know where the house stands, but she has to vote with the house. Christian says he has Azah, Big D, Britini and Alyssa. With Tiffany and Claire, he has six votes to stay. In the DR, Tiffany says she has a soft spot for Christian, but she knows he needs more than her vote. Big D and Britini have not made up their minds, despite what they may have said. Tiffany hugs Christian and cries.

8:21 p.m. — Tiffany tells Britini and Big D that they need to let Christian know they aren’t voting for him or she will. She doesn’t want Christian to think she’s the only swing vote in the house. Tiffany leaves and Big D says “I’m not worried about that bitch.” Then Big D tells Azah he doesn’t want to be part of the Cookout anymore because he doesn’t want to work with “that bitch” Tiffany. He doesn’t listen to anyone except his “mother and God.” Azah begs Big D to hold it together. Big D doesn’t think Tiffany is a team player and she’s trying to run the house.

8:28 p.m. — Tiffany sits down with Christian and tells him that people have him believing he needs one more vote, but he needs three. She tells him not one of the Jokers are voting for him to stay. Tiffany says if she was the swing vote she would vote for him to stay. Finally she says Big D and Britini are flip-floppers. Christian says if he stays he provides safety for that side of the house. Tiffany realizes that keeping Christian is more beneficial for her game than Sarah Beth. She’s conflicted now. Tiffany goes to Xavier and tells him that if she pushes hard enough she can get Christian to stay. Xavier thought the same thing, but he thinks the rest of the Cookout wants Christian gone. Xavier knows as long as the Cookout is in tact, any of them can sit next to Christian in the future and have the votes to send him packing. With Xavier and Alyssa on board to keep Christian, Tiffany goes to work.

8:32 p.m. — Tiffany talks to Claire first about keeping Christian. Claire thinks it benefits everyone’s game other than Derek X. She also says she doesn’t trust Kyland or Sarah Beth. Are these two flipping the house? It sounds like they want to. Tiffany asks Christian to send Britini to the HOH room. He grabs Britini, but Big D and Azah decide to accompany her because they are tired of Tiffany trying to manipulate Britini. Big D says they won’t let Britini talk to Tiffany alone so Tiffany says she’ll wait, forget about it. Big D is now FUMING. Tiffany is pissed as well and goes to complain to Xavier and Hannah. The Cookout is crumbling! Tiffany is so much better at this game than Big D, but she may be pushing too hard and endangering herself in the process.

8:38 p.m. — So who is going to be evicted? It’s time to find out! The live vote and eviction is about to take place, but first Christian and Sarah Beth will address the house. Christian reminds everyone that he’s loyal and competitive, but nothing will be taken personal if he’s evicted. Sarah Beth complains about being covered in bruises and sitting next Christian on the block. She also ensures them if she makes it to jury she will make an objective vote. Then Julie interrupts, “How do you know I don’t have a twist up my sleeve about jury?” Oooh, spill the tea Julie, spill the tea!

8:48 p.m. — The houseguests all head to the DR to cast their votes. By a vote of 7-2, Christian has been evicted from the “Big Brother” house. Alyssa and Xavier were the two votes against Sarah Beth. Before leaving, Christian plants a big, wet kiss on Alyssa and the house erupts.

8:59 p.m. — Julie reveals the next big twist of the summer. She fills the houseguests in on this news. They’ve all made jury at this point and beginning next week the jury begins to form. But there’s a new twist! A new room will open up at the BB Beach Club called the High Roller’s Room. Inside are three unique BB casino games and three game-changing powers. How would they like to take themselves off the block? Or earn a second Veto? Or even flip the power in their favor? America will vote each week to give players casino bucks that they can then use to play games. The better the prize, the more expensive it is to play. Who will YOU be sending money to? The episode ends with no new HOH named.