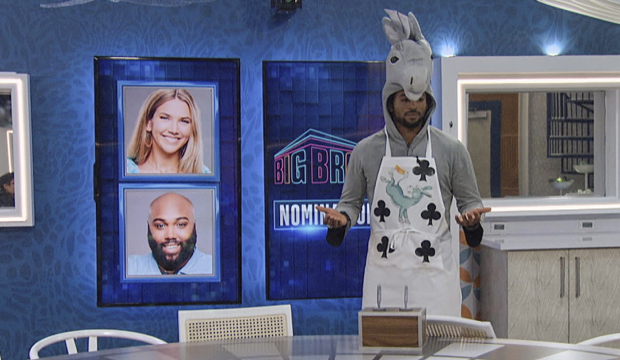 Last time on “Big Brother,” Claire Rehfuss and Derek Frazier found themselves nominated for eviction by Head of Household Kyland Young. Kyland’s plan was to evict Claire since she openly admitted to wanting to target some of his Cookout alliance members, with Derek F. going up as a pawn so that Britini D’Angelo could have the week off (sparing viewers another week of tears). Did the Power of Veto end up saving either Claire or Derek F. from the block? And did the High Roller’s Room twist result in anyone getting a second Veto medallion?

Below, read our minute-by-minute “Big Brother” recap of Season 23, Episode 18 to find out what happened Wednesday, August 18 at 8:00 p.m. ET/PT. Then be sure to sound off in the comments section about your favorite “BB23” houseguests on CBS’s reality TV show, who annoys you the most and who you think will ultimately join the “Big Brother” winners list. The remaining players are: Alyssa Lopez, Azah Awasum, Britini D’Angelo, Claire Rehfuss, Derek Frazier, Derek Xiao, Hannah Chaddha, Kyland Young, Sarah Beth Steagall, Tiffany Mitchell and Xavier Prather.

8:00 p.m. – “Previously on ‘Big Brother’!” In the 17th episode, Kyland won his second HOH comp of the season and then set his sights on evicting Claire, who inadvertently told him she wanted his secret alliance members ousted. Oops! Later in the High Roller’s Room, five players (Claire, Derek F., Kyland, Sarah Beth, Tiffany) tried their luck in the Veto Derby, with all but Tiffany qualifying because of their point totals. That meant these four now get to bet on who they think will win the Veto. If they’re right, they’ll secure a second medallion all to himself or herself. How will it all play out? Let’s go!

8:07 p.m. – The Veto Derby twist is huge because it could force Kyland to nominate two more players if Claire and Big D are both pulled down. Big D is acting as if he’s an actual target because he wants to lay low while Kyland figures out his true target. Britini feels completely safe because she made a deal with Kyland that she wouldn’t go up on the block this week. Big D sits down to chat with Kyland. Kyland says the reason he played in the High Roller game was to ensure the power was eliminated while someone in the Cookout was HOH. As of now, Claire is Kyland’s target but he’s also considering Alyssa and Britini. He’s not sharing any of this information with Big D though, which is making him paranoid.

8:10 p.m. – Big D is acting down in the dumps while he talks to Azah and Britini. He tells them not to use the Veto if they win it because he’s worried about another one of the Jokers replacing him. Azah has zero trust in Kyland at this point, but at least Britini has a “good feeling” they will all get picked to play in this week’s Veto competition.

8:15 p.m. – Tiffany is now in the HOH room with Kyland. Tiffany is fishing for an opportunity to pull Claire off the block. Kyland says Claire is the target because she named Big D, Xavier and Azah as her targets. Tiffany is blown away that Claire revealed her targets to Kyland and now she has to convince Kyland that Claire didn’t mean what she said. She seems to successfully move Kyland’s crosshairs to Britini. Tiffany has made some mistakes, but she’s damn good at this game.

8:20 p.m. – It’s time to pick players for the Veto competition! Joining Kyland, Claire and Big D are Alyssa (drawn by Kyland), Azah (drawn by Claire) and Britini (Houseguest’s Choice drawn by Big D). This is the best case scenario for the Jokers to keep Big D safe this week. Then the winners of the Veto Derby will place their bets on who will win. They find out this week’s Veto will be the OTEV competition. Kyland places his bet on Alyssa, Big D places his bet on Britini, Claire bets on Kyland, and Sarah Beth bets on Azah.

8:45 p.m. – It’s time for the Veto competition and the players couldn’t more thrilled to partake in the classic OTEV game. OTEV is a jacked jellyfish this season and he’s got a weird accent that sounds like a combination of Arnold Schwarzenegger and Donald Trump. OTEV will give the houseguests clues and then they will slide down into the yard and bring OTEV his jelly with the correct answer on it. The last player to return the correct jelly each round will be eliminated. Here is the order of elimination: Big D, Azah (who threw the competition to keep Britini in it — FYI Tiffany is “over being bothered” by Azah’s overprotection of Britini, lol), Britini, Claire and Kyland. That means Alyssa has won the Power of Veto! Because Kyland bet on Alyssa, he receives a second Power of Veto for himself. Kyland threw this comp to Alyssa because he wants to save Claire from the block himself, hoping to build back trust with her.

8:55 p.m. – Claire and Kyland have been relieved of their punishments and can now dress in normal clothes. Out on the hammock, Kyland talks with Sarah Beth and asks who she would vote for if nominations stay the same. She says she will vote for Big D. If nominations were to change, Sarah Beth would target Britini. Next, Kyland talks with Big D and tells him Britini will go on the block. Big D is trying to stay calm, but he hates this plan. Big D tries to convince Kyland to target Derek X. instead.

8:59 p.m. – Prior to the Veto meeting, Sarah Beth tells Britini she will be hitting the block. Furious, Britini runs into the house to look for Kyland. She pulls him aside and asks if it’s true. Kyland basically talks in code and tells her he’s trying to move any variable that’s unpredictable. Kyland isn’t winning any fans with this conversation. And Britini is in tears again. In the Diary Room Britini calls Kyland an “arrogant little bitch,” but out in the backyard, she’s sobbing in the arms of Azah and Big D. She plans to make hell break loose before she’s gone. The episode ends without the Veto meeting being shown.