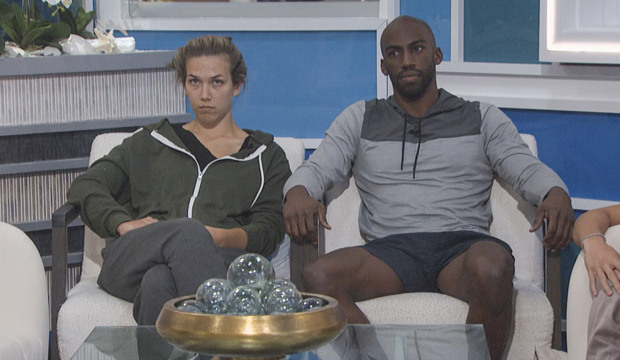 One of the Cookout’s worst nightmares on “Big Brother” was for Sarah Beth Steagall to become Head of Household, but it’s turning out not to be such a bad week for them. After SB nominated Claire Rehfuss and Derek Frazier for eviction, the High Roller’s Room twist resulted in Alyssa Lopez removing Big D from the block. She then spun the roulette wheel and randomly ensured that Xavier Prather went up instead. SB previously hinted that if the Veto got used on either Claire or Xavier, she would nominate Derek Xiao in his place … which is exactly who the Cookout wanted to get out this week. So did the Veto shake up the game on Wednesday night?

Below, read our minute-by-minute “Big Brother” recap of Season 23, Episode 21 to find out what happened Wednesday, August 25 at 8:00 p.m. ET/PT. Then be sure to sound off in the comments section about your favorite “BB23” houseguests on CBS’s reality TV show, who annoys you the most and who you think will ultimately join the “Big Brother” winners list and win the $750,000 grand prize. The remaining players are: Alyssa Lopez, Azah Awasum, Claire Rehfuss, Derek Frazier, Derek Xiao, Hannah Chaddha, Kyland Young, Sarah Beth Steagall, Tiffany Mitchell and Xavier Prather.

8:00 p.m. – “Previously on ‘Big Brother’!” In the 20th episode, Sarah Beth celebrated being the first female HOH of this 23rd season. She then consulted with her BFF Kyland about who to nominate for eviction. He kept swaying her toward Claire and Derek X., not wanting any of his fellow Cookout alliance members to see the block. Elsewhere, Azah cried over the eviction of Britini D’Angelo, Derek F. and Tiffany got into a huge fight, and Alyssa saved herself (and doomed Xavier) by winning the High Roller’s room. Time to kick off tonight’s episode!

8:10 p.m. – Alyssa is crushed that Xavier is on the block because of her roulette spin. He is remaining calm because the Cookout has his back, but Xavier was really hoping to have a perfect season without seeing the block once. Oh well, eyes on the prize! Claire is relieved because she’s sitting next to a huge threat now, but she has no idea that the Cookout would cut her before the major threat within their own alliance. Alyssa is sobbing while Xavier comforts her even though he’s the one on the block. Up in the HOH room SB meets with Claire. SB says she has to talk to people and see where everyone’s heads are at, but she doesn’t want Claire to go home. Claire is no dummy and understands DX is the backdoor option. Claire voices her concern to DX  and he’s mortified. Tiffany joins the conversation and she legitimately wants DX to stay. She knows if he hits the block the Cookout won’t save him. Later SB tells Alyssa that if Xavier comes up DX will take his place. This thrills Alyssa.

8:15 p.m. – DX heads up to the HOH room to talk to SB. He starts soft by asking how SB would feel if Claire picked him for Houseguest’s Choice. SB looks like she’s about to pee her pants, but says she wouldn’t care. Next DX asks if SB would want the Veto used. SB isn’t giving up anything! DX knows he’s in trouble and regrets not playing the roulette game. Later DX and Hannah cuddle (are they in SB’s bed?) while discussing the Veto. She knows DX has to win the Veto to remain safe, but if she were to win it she would do her best to keep him safe as well.

8:20 p.m. – It’s time to pick players for the Veto competition! Joining SB, Claire and Xavier are Azah (drawn by SB), Big D (drawn by Claire) and Alyssa (drawn by Xavier). DX feels his game crumbling around him. Claire begins to cry in the Diary Room. This is the worst case scenario for both of them. Claire says she has no option other than to ensure Xavier stays on the block.

8:30 p.m. – It’s time for the Veto competition! Players will compete by themselves in the backyard. It looks like a safari theme and players must set up dominos along the course that fall down perfectly, hitting a buzzer and clocking in their time. They have an option to go for the Veto or for a prize. There are also multiple punishments along their path. Alyssa goes for the Veto. Big D goes for the cash prize. Azah guns for the Veto. SB, Claire and Xavier obviously choose to go for the Veto. I love that SB gives zero F’s if America likes her. While taking the route with a BB Bankruptcy, SB tells America they can “wipe their butts” with the BB Bucks because they don’t give her any anyways. Ha!

8:40 p.m. – It’s time to learn the results of the Veto competition. Big D won 100 BB Bucks and $7,500 in cash. They don’t reveal who won the prizes to the other houseguests, but everyone knows it was him. Xavier has won the Power of Veto but has to endure three punishments: He loses all his BB Bucks, must go into solitary confinement for 24 hours and could become a third nominee at the next opportunity. Claire is devastated and feels like she let everyone down. Tiffany gives her a pep talk and tells her to hold it together and be strong. Tiffany feels conflicted because she loves DX and Claire. She tries to think of a plan to keep DX off the block.

8:55 p.m. – The houseguests learn that they will be packing Red Cross emergency kits for disaster relief. They enjoy the opportunity to take a break from the game and do some volunteer work. Moments later it’s back to the game. DX is chatting with Tiffany. Tiffany says he should convince SB to put Hannah on the block because Hannah would have the votes to stay. Tiffany is more willing to lose Claire than DX because DX is more valuable to her game. Cutthroat! DX takes Tiffany’s advice and brings the idea to SB. DX will guarantee SB safety for two to three weeks if she keeps him safe this week. SB asks Derek if he thinks Hannah would actually go home if she was on the block next to Claire. DX says if Hannah leaves the game, SB and Kyland would become his closest allies. SB is considering the proposal.

8:59 p.m. – It’s time for the Veto meeting. As expected, Xavier has removed himself from the block. SB chooses to replace him with DX. The plan to backdoor DX is in full swing. “I think if I were to not take this shot while it’s perfectly lined up, it would show reckless overconfidence on my part,” SB says while crushing DX’s dreams. SB has no idea she will likely follow him out the door shortly.