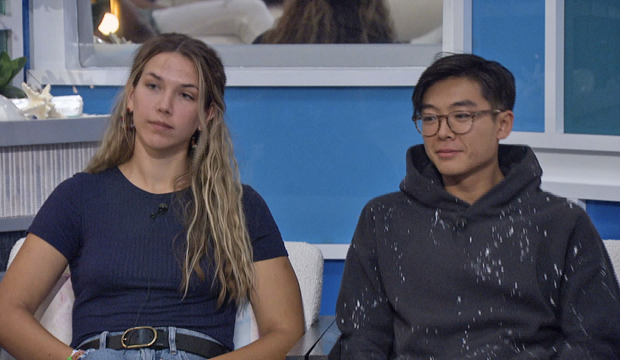 Heading into Thursday’s live episode of “Big Brother,” Derek Xiao had leading 21/50 odds to be evicted, compared to only 12/1 odds for his block-mate, Claire Rehfuss. Head of Household Sarah Beth Steagall‘s ultimate plan was to oust Derek X. because he was the biggest threat in the game. Unless the majority six-person Cookout alliance had a massive surprise up their sleeves, it was likely he’d be the one having a meet-and-greet with Julie Chen Moonves at the end of the night. So did Cookout members Tiffany Mitchell and Hannah Chaddha find a way to save their close ally?

Below, read our minute-by-minute “Big Brother” recap of Season 23, Episode 22 to find out what happened Thursday, August 26 at 8:00 p.m. ET/PT. Then be sure to sound off in the comments section about your favorite “BB23” houseguests on CBS’s reality TV show, who annoys you the most and who you think will ultimately join the “Big Brother” winners list and win the $750,000 grand prize. The remaining players are: Alyssa Lopez, Azah Awasum, Claire Rehfuss, Derek Frazier, Derek Xiao, Hannah Chaddha, Kyland Young, Sarah Beth Steagall, Tiffany Mitchell and Xavier Prather.

8:00 p.m. – “Previously on ‘Big Brother’!” In the 21st episode, Alyssa cried in the bedroom because her roulette wheel inadvertently put her best buddy, Xavier, up on the block. But Xavier wasn’t up there long, as he claimed victory in the Veto competition and took himself off the block. Derek X. knew he was going to be the replacement nominee, but he still tried his hardest to convince Sarah Beth to put up Hannah instead. SB explained at the Veto ceremony that she would be a fool not to target Derek X., and so America’s favorite houseguest went up on the block. Will he be going home tonight?

8:10 p.m. – Julie welcomes us all to live eviction night by saying the summer theme of “No risk, no reward” has never been more true. DX’s failure to play in the High Roller’s Room may end with him walking out the door. Following a quick recap of the week, things pick up with DX replacing Xavier next to Claire on the block. The house seems pretty content with DX heading out the door, but Tiffany thinks DX would benefit her game more than Claire. Tiffany brings her idea to Azah and Hannah. You would think this would be something Hannah is on board with, but instead she quickly runs to Xavier to tell him Tiffany is trying to flip the vote. Hannah is sneaky! And I like it. Xavier remains calm and decides to talk some sense into Azah while he cradles her in his arms. He knows Tiffany won’t be as easy to convince. Xavier and Kyland team up on Tiffany and she gets annoyed by the hypocrisy from them. She won’t be bullied by Kyland about her personal relationships while he continues to hold Sarah Beth under his wing. Xavier excuses Kyland so he can talk to Tiffany alone. He goes at Tiffany with a much more sympathetic tone. He’s so good at this game!

8:12 p.m. – Tiffany tells Xavier what he wants to hear, but assures us in the Diary Room that this game is not over! Tiffany speaks to Azah and says she is tired of the guys and she knows they will beat them. Tiffany wants the final three to be herself, Azah and Hannah. Tiffany thinks the guys want to take credit for everything even though she created the master plan that has led to them all dominating this game.

8:20 p.m. – The houseguests gather in the living room to say goodbye to Xavier. He will be locked in the Have Not room for 24 hours and will not be released until Julie calls him down to cast his vote in tonight’s eviction. With Xavier out of the way, Tiffany hopes to flip the vote and keep DX in the house. Tiffany pulls DX aside and tells him to ask Azah for a sympathy vote. If DX gets sympathy votes from Azah and Kyland and actual votes from Tiffany and Hannah, the plan to save him could work. Tiffany’s mind is always spinning. DX heads over to Azah and pitches to her that if he stays he won’t be in the house much longer. He simply wants to stay a little longer and take out a few more targets. He wants to protect Azah, Hannah and Tiffany if they will keep him around. He even throws in a few tears for good measure. Azah thinks DX staying could be a game changer that benefits her.

8:35 p.m. – It’s time for the live vote and eviction. Will DX’s last ditch effort to stay in the house work? No. By a vote of 5-2, DX is evicted from the “Big Brother” house. Hannah and Kyland were the two votes to keep DX in the house.

8:53 p.m. – It’s now time for the live HOH competition. As the outgoing HOH, Sarah Beth is not eligible to play. Tonight’s game is dependent on how well the houseguests have memorized clips displayed on the memory wall throughout the week. Julie will ask a series of True or False questions about what they have seen. If a player gets one wrong they will immediately be eliminated. The last person standing will win this week’s HOH. In Round 1 Xavier, Azah and Claire are eliminated. In Round 2 Kyland and Big D are eliminated. In Round 3 nobody is eliminated. In Round 4 Alyssa and Hannah are eliminated. Tiffany is the new HOH! On their way back into the house each player grabs an envelope that has a random amount of BB Bucks inside.

8:59 p.m. – Even though Tiffany is this week’s HOH, her reign could be overtaken by someone in the High Roller’s Room if they win the Coin of Destiny. But for now, Tiffany is thrilled with her win. We will find out Sunday if Tiffany’s nominations are up on the block or if someone else takes control.