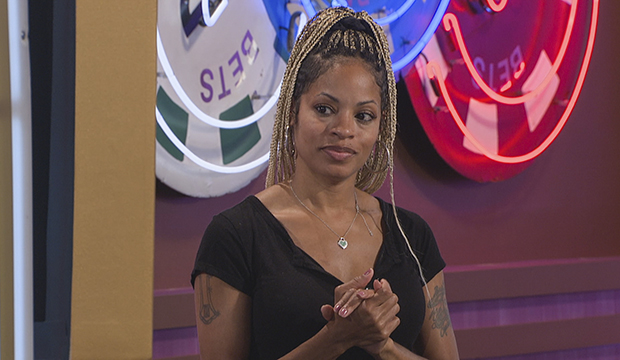 When we last checked in with the “Big Brother” Season 23 houseguests, Tiffany Mitchell had just claimed victory in the Head of Household competition. Her win meant that the Cookout alliance would likely be safe for another week … that is, unless the High Roller’s Room shook up her game. So who did Tiffany nominate for eviction, and who won the all-important Coin of Destiny competition?

Below, read our minute-by-minute “Big Brother” recap of Season 23, Episode 23 to find out what happened Sunday, August 29 at 8:00 p.m. ET/PT. Then be sure to sound off in the comments section about your favorite “BB23” houseguests on CBS’s reality TV show, who annoys you the most and who you think will ultimately join the “Big Brother” winners list and win the $750,000 grand prize. The remaining players are: Alyssa Lopez, Azah Awasum, Claire Rehfuss, Derek Frazier, Hannah Chaddha, Kyland Young, Sarah Beth Steagall, Tiffany Mitchell and Xavier Prather.

8:00 p.m. – “Previously on ‘Big Brother’!” In the 22nd episode, America’s favorite player, Derek Xiao, failed to sway enough votes to keep himself in the game. He was evicted by a 5-2 vote over Claire, with only Kyland and Hannah voting to keep him. Speaking of Hannah, Derek X. told Julie Chen Moonves that there might be a romantic future between the two of them. “Expect the unexpected,” he teased. The episode ended with Tiffany becoming the second female (after Sarah Beth) to become HOH. How will tonight’s episode play out?

8:03 p.m. – We were all stunned when Tiffany didn’t vote to evict Derek X. on Thursday, but she explained tonight that she wasn’t willing to risk The Cookout by trying any harder to keep him. And with her new win, she has secured herself safety and seemingly safety for Claire, Azah and Hannah who all celebrated with her privately in the pantry. Kyland was not as celebratory, but more because he felt guilty about Derek’s eviction. That being said, while he was crying on Derek F.’s shoulder about it he also doesn’t regret that he had to go.

8:05 p.m. – Sarah Beth also had tears from the nerves of Tiffany’s HOH win, but more because Derek X.’s “hurtful” comments prior to eviction where he insinuated that SB is a huge threat in the house and playing a “Nicole F.” game. That she formed a new alliance, called The Monarchy, with Alyssa, Xavier and Kyland gave her a little more assurance that she could be safe this week anyway.

8:09 p.m. – Based on their original plan to have Cookout members pair off, Tiffany approached Kyland to ask who should go on the block this week and he instantly replied SB and himself, as she hoped. It must have been comforting to Tiffany to know that Kyland would be a willing pawn, but she cooly played it off by asking him again if he’s sure and whether she should do SB and Alyssa instead.

8:12 p.m. – Joining the emotional parade, Hannah checked in with Tiffany about the guilt over sending Derek X. home. It gave Tiffany a chance to assure her that he’ll forgive her and that the pact they made was to choose The Cookout over every other personal relationship in the house. She also reminded her that Xavier, Kyland and herself will also go through the same guilt when they sent Alyssa, SB and Claire home, respectively.

8:15 p.m. – Because he’s one of the people she thinks has the money to win the Coin of Destiny challenge, Tiffany checked in with Derek F. to make sure he knows that she wants him to play and win it. The two of them have had a tough time seeing eye to eye all season and so the conversation made Derek think she might be considering putting him up. Next, she chatted with SB who told her that she could possibly be playing and would play to win. It doesn’t sound like SB will have enough money to play, but she wanted to keep Tiffany on her toes in the hopes that the threat would make her second guess putting her and Kyland up. Tiffany took the opportunity to more or less reprimand SB for sending Derek X. home, saying that the move “cut off my legs” because Derek X. was the only male in the house fighting for Tiffany’s spot. SB was surprised at Tiffany’s reaction while also privately admitting that she did know that Derek leaving would be a blow to Tiffany’s strength in the house.

8:23 p.m. – After sharing her new HOH room with everyone, Tiffany entered a follow-up chat with SB where SB made arguments to get her look at other people as nominee options. She exposed Alyssa for telling SB about Tiffany’s strong (negative) reaction to SB winning last week. Tiffany called the throwing of Alyssa under the bus as “very convincing” and that she might consider following that path instead.

8:30 p.m. – At the nomination ceremony, Tiffany revealed the names of her nominees: Kyland and Sarah Beth. Those two joined Xavier, who was an automatic third nominee based on the results of the prior week’s POV comp. Tiffany explained her decision away by calling them out as a powerful duo and to put her own personal game first. Privately, she said that she couldn’t be swayed from finally taking a shot at SB in order to target Alyssa instead.

8:34 p.m. – In their third meeting of the episode, Tiffany told SB that Kyland is her actual target. It was an active lie aimed at getting SB to not fight as hard for the Coin of Destiny or, eventually, the POV if it comes to that. SB received the bad news pretty well, and told Tiffany that she appreciates her being up front about the decision to put them up and her reasons.

8:36 p.m. – Prior to competing for the Coin of Destiny in the final High Rollers comp, Tiffany announced that the winner of the comp would earn the chance to dethrone her as HOH in anonymous fashion and replace her two nominees with two of their own. She also clarified that she would be safe from being one of those nominees and that Xavier’s punishment nomination must remain as well.

8:42 p.m. – First to enter the High Rollers room today was Azah, who earned an additional 50 BB and 50 more in her card, amounting to only 200 BB so should didn’t have enough to play. The amount Xavier and Alyssa earned from the vote and the cards didn’t allow them to play either. Prior to going in, Hannah told Tiffany that they should try to get Claire as the only one to play Coin of Destiny so that she takes over for Tiffany and will be ineligible next week, and thus available to be nominated. Hannah and Tiffany met with Claire who immediately said she plans to play. Hannah went into the room and had a total of 300 BB, enough to play the 250 game, but declined the chance to play. Xavier’s 200 BB total wasn’t enough and neither was Tiffany’s 225. SB had a slim chance of earning enough money, but the 150 BB she added to her total today wasn’t enough. Tiffany’s attempt to stop Derek F. from playing in the comp by saying he needs to be able to play HOH next week didn’t work because he wasn’t going to let his 425 BB go to waste and because he wanted to show that he tried to win.

8:47 p.m. – In the Coin of Destiny game, Derek had to roll oversized coins down a ramp into one of three slots in an attempt to get the most in within 2 minutes. But while he did want to play, Derek did not want to actually win, showing that he does in fact have faith in Tiffany and the plan to keep him available to play in HOH next week. As the last to enter and a close ally of Tiffany’s, Claire wanted to play as well in order to protect Tiffany’s reign from anyone else’s meddling. Unlike Derek, she was playing to win, but as far as we saw in her first attempts, she couldn’t get more than one coin in.

8:53 p.m. – Finally, just before her time ran out Claire was able to get two more in, for a total of three. Good thing (for The Cookout) that Derek decided to really throw it by only making one! Because the comp would result in a secret HOH, the results of the comp and who played in it couldn’t be revealed. Instead, the houseguests were informed that there was a winner and that she’d have to flip the Coin of Destiny to determine if she’d be overthrown.

8:56 p.m. – The coin flip determined that Tiffany was dethroned, and only Claire knew that it placed her in the chair. Immediately, SB and Kyland’s faces disappeared from the nomination screen to be replaced instantly by Claire’s nominees. Claire’s nominees appeared: Kyland and Sarah Beth. With that, the High Rollers Room closed and the nominees for the week, prior to POV, were locked. To SB, that meant that either her or Kyland would be going home this week.