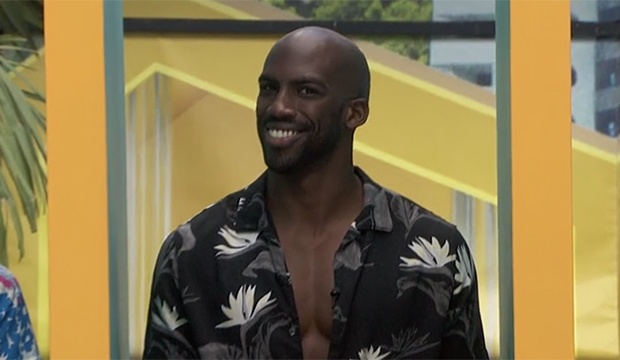 After a crazy two weeks in the “Big Brother” house, Brandon “Frenchie” French said goodbye during the second live eviction episode. It was a near-unanimous vote over his block-mate Britini D’Angelo, with only Derek Frazier casting a pity vote to keep him. Following Frenchie’s one-on-one chat with Julie Chen Moonves, the eligible players competed in a Head of Household competition hosted by “Celebrity BB” player Tom Green, with Xavier Prather answering the most correct questions. So who did new HOH Xavier nominate for eviction? And who won this week’s wildcard comp?

Below, read our minute-by-minute “Big Brother” recap of Season 23, Episode 8 to find out what happened Sunday, July 25 at 8:00 p.m. ET/PT. Then be sure to sound off in the comments section about your favorite “BB23” houseguests on CBS’s reality TV show, who annoys you the most and who you think will ultimately join the “Big Brother” winners list. Here are the current team breakdowns:

8:00 p.m. – “Previously on ‘Big Brother’!” In the seventh episode, Frenchie gave his housemates a graceful goodbye hug after his elimination. “I came in strong but I came in with a purpose,” he said in his exit interview, referring to the fact that he wanted an older guy to shake up the game for once. After Frenchie went toast, the house competed in the third HOH comp of the season, with Xavier claiming victory. That means his fellow Kings are also safe this week: Christian, Alyssa and Sarah Beth. And now you’re all caught up. Let’s go!

8:02 p.m. – It’s Day 16 and Xavier’s goal as the new HOH is to not have chaotic of a run as Frenchie did two weeks ago, knowing that the Wildcard competition could impact his plan for his reign. Both Britini and Brent felt good with Xavier’s win, thinking that they’d be kept off the block. Despite being in one of Xavier’s big alliances, The Cookout, Derek F. was a bit anxious that his hinky vote to keep Frenchie might reflect poorly and get him nominated.

8:05 p.m. – With The Slaughterhouse alliance laid to rest, the creation of The Royal Flush alliance will have its first big test this week. It consists of the entirety of the Kings and Queens teams plus Derek X. who is the “ace up their sleeve.” Outside of that alliance, Azah and Derek F. could be protected by Xavier through The Cookout, while Whitney, Brent, and Britini would all be vulnerable.

8:08 p.m. – Brent started to rub some of the players in the house the wrong way, mostly the women, with an overextended ego about how appealing he is. Notably, he attempted to clear the air with Alyssa by saying that he wants to work with her not as a showmance, but because he trusts her. From her perspective, a showmance was never in the cards anyway! All this put Brent in the line of fire when Tiffany went to Xavier suggesting him as the main target for the week.

8:15 p.m. – While Alyssa and Brent might not be the showmance Brent thinks they could be, Hannah had her eyes on Derek X. as one of her own. Derek notices Hannah’s flirtations, but has yet to reciprocate them in the same way that Alyssa and Christian have been caught on night cams showing affection for one another. In both cases the budding showmances have started to create space for those pairs to work together more closely within the context of the game. Hannah and Derek X. confirmed to each other that they threw the HOH comp to Xavier in the last round because had either of them won then Brent and Whitney would have earned safety for the week. That conversation wasn’t over as it remained to be seen whether a potential Wildcard win by Derek would provide safety to Brent as well.

8:24 p.m. – For this week’s Wildcard comp the teams chose the following players to compete, keeping in mind that no one who played previously can play again: Tiffany for the Queens, Britini for the Jokers, and Derek X. for the Aces. Privately, Derek X., Tiffany and Claire discussed the strategy of keeping the win away from Britini to keep her as a nom option and via Derek away from Brent as the main target, meaning that they’d “throw” the comp to Tiffany to win.

8:31 p.m. – In the comp, the three players had to traverse a zig-zagged and wobbling balance beam in “Unlucky 13.” Each of them would take an oversized playing card across their beam and place it in the station of an opponent in an attempt to get four cards in their station totaling 13 and eliminate them. Quickly it became apparent to Britini that both Derek and Tiffany were attempting to eliminate her by putting cards in her station, but the way the game works also made it necessary to move around cards in your own station to keep it away from reaching 13. Toward the end, despite having the perfect card to get Derek’s station to 13, Britini struggled with the math and moved away for a defensive move instead. That provided the opportunity for Derek to use his next card in her station, eliminating her first. At that point, with only two cards in her own station, Tiffany had an easy time switching cards in Derek’s to earn the win for herself, as planned.

8:39 p.m. – For Tiffany’s Wildcard win decision she could take safety for herself as well as providing safety to one player from the other two teams, or she could reject the safety and leave all players from the three teams available to be nominated.

8:46 p.m. – With only a few minutes to consider her decision and all of the plans for the week swirling in her head, Tiffany decided it’s too risky to give anyone safety and so she declined. That decision kept everyone in her alliances happy, ensuring that Brent would remain eligible for nomination. Brent considered the decision a “best case scenario,” too, thinking he’s 100% safe with Xavier as part of The (former) Slaughterhouse. Of everyone, Britini was most devastated because of the clear strategy against her in the comp, which also rubbed her teammate Azah the wrong way.

8:48 p.m. – Ahead of his own decision, Xavier pulled Tiffany in to the HOH room to discuss how he should go about nominations this week. He explained that putting Brent against Britini would make him feel calm and not need to campaign, but putting him against Whitney would raise Brent’s guard. Later, Xavier put a bandage on Azah’s concern by being up front about using Britini as a pawn. Azah didn’t see the need for Britini as a pawn, saying that it’s too early in the game to be running so many schemes. Instead he urged him to put Whitney up against him and if he won’t then he should consider putting her up as the pawn instead of Britini. Xavier was not a fan of that plan, but Azah insisted that she does not want Britini to go up again and urged him to nominate her instead even if it means she accidentally goes home.

8:55 p.m. – Before announcing his nominations, Xavier pulled Brent in to discuss him going up as a pawn. Brent didn’t like the idea, realizing that he’s too big of a threat to put up in front of all the other players in the house. He told Xavier that it would feel like a betrayal to go up as a pawn and that ultimately him on the block is not a pawn scenario — he would definitely go home.

8:57 p.m. – At the nomination ceremony, Xavier nominated Brent and Britini for eviction. He told Brent that he’s trustworthy and that putting him up will ensure his target will go home. He told Britini that he believes if she had the chance to nominate people that she’d nominate him and so he was basically coming for her first. That was all a misdirect from his true target, Brent. An emotional and pissed off Britini was determined to fight for her life while Brent declared “game on” against Xavier based on his decision.