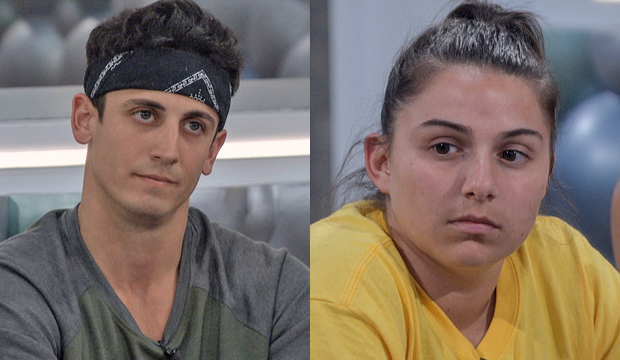 Another week in the “Big Brother” house meant another week on the block for Britini D’Angelo. She was nominated for eviction by Head of Household Xavier Prather, whose true plan this week was to oust Brent Champagne, the house’s number one target. During Xavier’s nominations speech, he told Brent he was a pawn, but that was a lie to make him not fight as hard during the Veto. So how did the Power of Veto competition play out on Wednesday night? Did Brent or Britini end up saving themselves from the block?

Below, read our minute-by-minute “Big Brother” recap of Season 23, Episode 9 to find out what happened Wednesday, July 28 at 8:00 p.m. ET/PT. Then be sure to sound off in the comments section about your favorite “BB23” houseguests on CBS’s reality TV show, who annoys you the most and who you think will ultimately join the “Big Brother” winners list. Here are the current team breakdowns:

8:00 p.m. – “Previously on ‘Big Brother’!” In the eighth episode, things immediately got down to business as Xavier’s two alliances (the Cookout and the Royal Flush) both wanted the new HOH to send home Brent. The only problem? Xavier and Brent were in a third alliance (the Slaughterhouse) together. Tiffany won the wildcard comp but chose not to take safety because it would have meant other random people, including potentially Brent, became safe, too. Xavier then made two enemies at the nominations ceremony when he put up Brent and Britini, but how will the Veto shake up the game, if at all? Let’s go!

8:10 p.m. — Following the nomination ceremony, Britini bursts into tears even though she’s not the target. This is “Big Brother,” get it together! Brent isn’t happy to be nominated but at least he’s not an emotional disaster. Xavier goes to speak with Britini, who at this point is whaling as if someone just ran over her puppy. Her reaction alone would make me vote her out of the house. She vows (again) to win the Power of Veto and save herself. Meanwhile, Brent’s fellow Aces talk about how they helped organize his nomination and he’s still unaware he’s the target. Next, it’s Derek F.’s turn to hold Britini as she cries. Azah looks on and she’s upset that Britini has been targeted once again.

8:15 p.m. — Brent is starting to realize he’s the target and goes to tell Xavier he’s not “dumb,” over and over again. Brent is convinced the majority of the house will vote to keep him safe, completely unaware they despise him. He heads to the gym to speak with the Aces and tells them Xavier thinks “my body perceives my intelligence.” That’s not a typo, and no, it doesn’t make sense either. The Aces pretend they’re upset for Brent and say they’ll do what’s necessary to keep him in the game.

8:20 p.m. — Azah heads up to the HOH room to talk to Xavier because she doesn’t agree with his decisions or the things that he’s said. Xavier is emotional now because he made Britini cry. He explains once more that he could not put Azah up on the block, even though she offered herself. She respects his decision, but she still doesn’t understand why Tiffany and Derek X. targeted Britini in the wildcard comp. She heads down to get some answers from Tiffany. Tiffany doesn’t really seem in the mood for this conversation, telling Azah Brent is the target so it doesn’t matter. Tiffany considers herself a logical player and Azah an emotional one, refusing to show her hand. Azah understands they play differently and leaves it at that. Tiffany tells Xavier about her “confrontational” conversation with Azah. She has respect for Azah’s “level of understanding” but they don’t need any “rain at the cookout.”

8:30 p.m. — Christian and Alyssa are snuggling in the HOH room, pretending everyone doesn’t already know they’re in a showmance. Christian pulls the covers over their heads and plants a kiss on Alyssa that she calls a “10/10.” Xavier walks in and catches them, a little disturbed it’s happening in his bed. Next, it’s time to pick players for the Veto competition! Joining Xavier, Britini and Brent in this week’s comp are Christian (picked by Xavier), Derek F. (drawn by Brent) and Whitney (drawn by Britini). In the Diary Room, Derek F. reveals he will pull Britini off the block if he wins. Xavier tells Hannah that he hopes himself or Christian wins the Veto so nominations stay the same. I don’t think anyone despises Brent more than Hannah, who can’t deal with the flight attendant’s ego. Xavier really wants to work with Hannah and pulls her into the Cookout.

8:35 p.m. — It’s time for the Veto competition! The players arrive in the backyard wearing tutus to play a “BB” classic where they spin 15 times on a handle before heading to a bowling lane to knock down specific pins. Each time a blocker rises to stop their bowling balls, players must head back to the handle and spin 15 more times to continue bowling. Britini is chosen to play first and she challenges Brent. The flight attendant defeats her and Britini is the first player out of this Veto competition. In match two, Xavier challenges Brent as well, solidifying him as the target.

8:45 p.m. — The remainder of the Veto competition goes as follows: Xavier defeats Brent (who ends up puking). Derek F. defeats Whitney (they were both AWFUL at this game!) Christian defeats Derek F. (who is exhausted from his first turn at the bowling alley). Finally, Christian defeats Xavier to claim the Power of Veto. Christian is excited to assist Xavier in evicting Brent this week.

8:59 p.m. — Brent is certain he has the votes to stay in the house, so he doesn’t even plan to ask Christian to save him with the Power of Veto. After seeing Britini enjoying a game of pool with Christian, Brent becomes convinced the Veto will be used. His gut is “never wrong!” Delusional about his situation, Brent goes around the house telling everyone to convince Christian NOT to use the Veto. That way they can “shock Xavier” when Britini is evicted on Thursday. Later, everyone laughs at Brent in the HOH room because he is so out of touch with what is actually happening in the game. I almost feel sorry for the guy. At the Veto ceremony, Christian chooses NOT to use the Power of Veto, meaning Brent or Britini will be sent packing on Thursday. The episode concludes with Brent saying “everything is going according to plan,” and he can’t wait for the house to blindside Xavier. Sadly for Brent, it’s him that will be in for a shock tomorrow night.