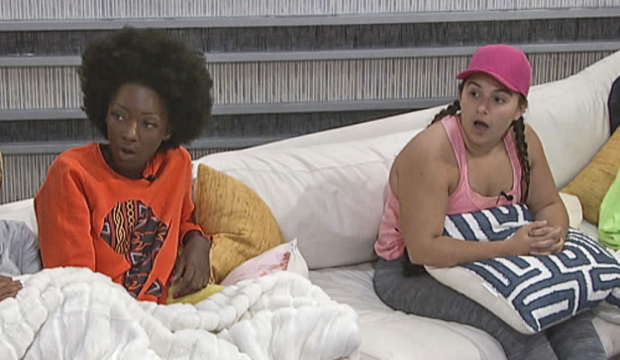 By the end of Sunday’s episode of “Big Brother 23,” it seemed as though the new Head of Household, Kyland Young, had settled on Claire Rehfuss as his target for the week. He nominated her for eviction against his Cookout ally Derek Frazier, a secret volunteer pawn hoping to protect his own closest allies Azah Awasum and Britini D’Angelo from seeing the block themselves. That all changed drastically on Wednesday night‘s Power of Veto comp episode when Alyssa Lopez and Kyland both earned veto medals. In that episode, Kyland settled on a plan to remove Claire from the chopping block and backdoor Britini instead. Now, based on our users’ eviction predictions, Britini is the likely person to go home in week 6 with an overwhelming 17/20 odds.

Kyland’s initial aim at Claire boiled down to a limited amount of choices for nominees considering the Cookout and what’s left of the Royal Flush alliances he’s a part of. His far-reaching connections in the house left him with only Claire, Britini and Alyssa as viable targets. He is the player closest to Sarah Beth Steagall, the one person that everyone in his alliances had hoped to get out this week instead, so she was safe much to their chagrin. In fact, Kyland’s win on the HOH comp ticked off Cookout members Azah and Tiffany Mitchell, both of whom attempted to get Kyland to throw the comp in their favor.

When Claire became the de facto target for Kyland, Tiffany was further frustrated with him because Claire is her own off-shoot alliance from the Cookout. In a plan she devised weeks ago, Tiffany wanted each of the Cookout members to bring along a side member of their own to beef up their numbers and help get the alliance to the final six. If Claire were to go this week, Tiffany would have been the first member of the alliance to lose their side ally.

Instead it seems as though Derek and Azah could lose their side ally. Azah has been overly protective of Britini all season. In week 3 when Xavier Prather was in power, Azah begged him to nominate her as a pawn instead of Britini for the second week in a row. Xavier smartly declined the offer of putting his own alliance member in danger so early. The decision put Britini in danger for the second of an eventual three times as a house pawn. The third time was last week during Derek Xiao‘s reign when she won the POV to remove herself and provide Derek the opportunity to backdoor comp beast Christian Birkenberger.

As a three-time pawn, Britini had found herself in a vulnerable position in the house without any powerful players backing her presence in the game. That they were able to nominate her so often meant they were ultimately okay with her going home. The view of Britini changed after this week’s HOH though. Sarah Beth pointed out to Kyland that Britini targeted the two of them in the comp, clearly making the point that she wants to break their duo up. With Sarah Beth’s support, Kyland comfortably settled on Britini as the one that needed to go home. After successfully betting on Alyssa to win the POV, Kyland earned himself a second POV and held the power to make any move he wished.

Despite Derek F.’s best attempt to switch Kyland’s target to Derek X. as a challenge threat, Kyland maintained his position that Britini has to go. At the end of Wednesday’s episode, Sarah Beth clued Britini in to Kyland’s plan, setting Britini off to seek out Kyland in a last minute pitch to not put her up. What will Kyland do and will our odds correctly predict that Britini will ultimately be evicted on Thursday night? We’ll find out soon enough!