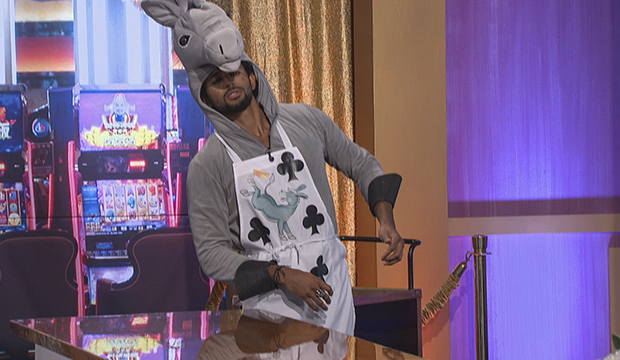 As expected, Britini was the replacement nom on Monday on “Big Brother 23” after Kyland used his Veto on Claire, putting Britini on the block for the fourth time in six weeks. And as expected, she did not handle it well. Also not going well: Kyland’s power trip.

Britini was in absolute hysterics following the Veto ceremony, sobbing to Azah and Derek F. about how she’s the “punching bag of the house” and that people see her as “expendable or some sh–.” It was awkward since Azah and Derek F. are her two closest allies, but they knew this was happening and that Britini’s going, so they just had to nod along. Big D, especially, fueled her fire, calling out Kyland and then calming down Brit with the Frenchie move of promising not to campaign against her. Brit was probably way too delirious to realize that one of her closest pals who’s been on the block this entire week was not pissed at all about neither Veto being used on him.

After eventually passing the “anger” phase, Britini set out to save herself without having to actively campaign against Big D. She cam-talked a motivational speech, embracing her role as the season’s block star: “I’ve been here before. I know what to do. They don’t call me the block queen for no reason.” Her campaign is centered on a white lie: She’s telling everyone that Kyland betrayed a safety deal she had offered him. It’s true that she did pitch him a deal after he won HOH, but he never accepted it and they definitely did not shake on it as she’s recounting. The lie itself is irrelevant since everyone’s annoyed with Kyland and his nonsensical convos anyway, and the plan is for Britini to go. Derek X. and Claire started pitching a vote-flip to Tiffany and Hannah (which is actually getter for Tiff’s and Hannah’s games), but they’re not gonna let that happen.

SEE ‘Big Brother 23 spoilers: Kyland is annoying everyone while Claire and Derek X. are this close to exposing the Cookout

Britini and Kyland had a brief convo during which he advised her to take the day to process everything before campaigning (real fresh coming from the guy who put her on the block). Brit asked if she’s the target and Kyland vomited more word salad: “I was indifferent but having people say things were immediately being said, I would recommend taking the day. … At the moment, there is an indifference that is available. We can chat and see how to proceed from there.” Sir. Kyland has never been articulate, but this is just ridiculous now. He’s like one of those people who tries to sound smart and important and almighty by overstuffing his sentences with words because he thinks more is good — or in this case, “more will mask my true intentions and also confuse the hell outta everyone.”

Kyland also told Britini not to campaign against him — yes, him, Kyland — and he referred to himself in the third person. He said when he heard his name mentioned, he “got heated and wanted to strike.” The HOHitis is outta control. “I’m sorry, are you on the block?” Britini cam-talked. “Are you on the block? I’m sorry. Let’s get something very clear, you are not on the block, I am on the block. You are not going to tell me how to campaign.” She relayed this to everyone, who encouraged her to campaign however she wants to campaign and eff Ky.

Kyland should be grateful he has the Cookout because he’d easily be the house target next week. Everyone has had enough. “When I asked him, ‘What do you think the house’s perception is of you, Ky?’, he said, ‘I’m great with everyone,'” Hannah told Derek F. “Ky genuinely believes that no one can see through him.” Hannah later told Azah that she would take a shot at Kyland if it weren’t for the Cookout. Fearing that the Cookout will be exposed if Kyland isn’t targeted, Azah thinks the next time they have HOH, two Cookout members, including Kyland, need to be nominated to maximize their chances at Veto and then they could backdoor someone else. It’s a risky move, especially with the roulette in play next week, but also not a terrible idea. Plus, at this point, would anyone really complain if it doesn’t work out and Kyland becomes a casualty?