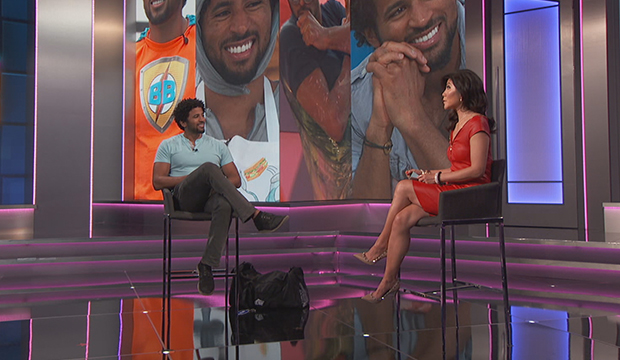 Kyland Young wanted to go to the final two on “Big Brother 23” next to Xavier, but he got blindsided on Thursday when X did not use the Veto and Derek F. cast the sole vote to evict him in fourth place. And to say he overstayed his welcome would be an understatement. Ky dillydallied by the door as he picked up his bag and asked Big D and X for an explanation before bringing up X’s nephew, telling X that he is setting a bad example for him by avoiding facing Ky in the final two. It was tense and awkward, and Julie Chen Moonves had to repeatedly call for him to come out.

In our exit interview below, Ky explains why he confronted X that way, why he doesn’t regret keeping him safe so many times, and the all the sniffing.

Gold Derby: How do you feel about Xavier saying he prioritized his final two with Big D and that he convinced Big D to evict you?
Kyland: In this game, people tend to stay consistent either to a person or an objective. For Xavier, he stayed consistent to an objective. His objective was to win the game by any means necessary. And that was after getting the Cookout to the end because he definitely did, like myself, make some moves against his individual game to help us move forward. I did help him out with some of those moves and direct him on some, but we got it done, and he was an awesome competitor as well.

As far as the part about him convincing Big D, that just reminded me of — I don’t know if it would be delusional or if it would be something else, if it was a general error — but I was like, “I literally told Big D straight to his face, like, ‘If the decision is left up to you, you shouldn’t bring me. It’d be better for your game on a strategic level to bring Azah if you’re OK playing that way. And honestly, people would forgive you if you played that way because, for you, it is necessary because you’re not as good of a competitor.’” So me telling Big D that three different times to his face feels more like I convinced him. And Xavier knows that as well, so for him to swoop in and try to take credit on that — I understand from a jury perspective why he did that, but to me, I’m the one that told you about that. So that was an odd choice that kind of added to the insincerity behind some of the other stuff he said.

Gold Derby: Do you regret keeping Xavier safe so many times instead of trying to get him out?
Kyland: I do not regret keeping Xavier safe, especially so many times at the end there. I told everyone in the house that I wanted to go to the end with competitors, to the final two. For a time, that would’ve actually been Tiffany and Xavier, pushing them to final three. However, as soon as it became clear we were gonna have our first Black winner … I knew that representation was important. And I wanted the winner this season to portray a certain type of gameplay that I, as a personal choice, find [to be] performing at a higher level. And that is getting to the end of the game by the ways that are necessary for you. There are certain people in the house that have to use any move they can and, of course, anyone can use those moves as far as lies or backstabs or whatever. I just knew that when I look at the first Black winner, I wanted gladiators at the end. And that was something Xavier told me he shared as far as looking at T’Challa vs. Killmonger or whatever it happened to be at the end. And that turned out to not be something he was committed to. But I told people in the house that even if he says he’s coming after me, I’m gonna bring him, so I don’t regret saving him. The only thing I regret is not winning that final Veto or that final four HOH. That would be the only thing I’d probably change.

Gold Derby: What was your thinking behind confronting Big D and Xavier the way you did before you walked out of the house?
Kyland: On the way out of the house, I was asking the other houseguests about any reasons for a heads-up or not in the game, specifically Big D — it didn’t surprise me because I told him three different times, “Hey, your better move is not to take me.” And he has limited options so that totally made sense and something I can honestly sort of respect from him.

As far as me confronting Xavier, I think the most important point that I wanted to get across is that nobody misunderstands the words that I said. Xavier and I had talked extensively about people like Kobe Bryant, people like Goku, people who love to face competitors at their best. And to sit down with a strong player at the end of the game would be in line with that. That’s something that he said he values personally and something that his family values, so I thought that that was something that we were both aspiring to do. And since he told me that that was something he looks up to and that his family looks up to, I was only bringing up the things that he had already said. As far as any personal choices, personal offense that moves to a different set of values that he may actually hold and pretty much reveals that he does, that’s something that I have no issue with. It’s just different than my own.

SEE ‘Big Brother 23’s’ Tiffany: ‘Kyland wants to keep Xavier because he is so egotistical’

Gold Derby: You wanted to go to the end with a strong competitor. How concerned were you that other houseguests might not want to bring a strong competitor like you to the end?
Kyland: Going into the game, I thought that a lot of people would be of that mindset of bringing a strong competitor to the end. Right around Week 6, I realized that I may be in pretty limited company as far as people who believe in winning that way. Granted, that was also something I was committed to doing before I came into the house as far as if I had the option to because I did not expect to play the game with the Cookout and have these options and have the options that we had.

I think a lot of the moves as far as not taking a strong competitor, winning by any means necessary, taking the easier route to the end — for me, cutting Xavier at five, having final four of me, [Hannah], Derek and Azah, and then just kind of walking my way to final two, that was an option that I decided I wanted to stay away from only because as the first Black winner of this show, I just knew that I wanted them to represent something beyond the game. Because that’s what we already did. We did something beyond the game. And I kind of was like, you know what? I understand this might be unrealistic or a little bit idealistic, I should say, but that’s something we already did. We already created this unrealistic, unexpected story. Why not continue it and stay idealistic? Seeing not as many people in the house thought that way was something I came to terms with really early and I knew that I would have to keep myself safe and make some other moves to make it happen if I wanted to. And I was really close, so I’m good with that.

Gold Derby: You sniffed a lot of tortillas in the house. What did they smell like?
Kyland: [Laughs] So I was sniffing a lot of tortillas and bread in the house. This was specifically because I think the COVID restrictions mean that our food had to be washed before it came in. There was nothing worse in the house than biting into a burrito or a taco or a sandwich and tasting some of the soap that leaked through the bags onto certain pieces of tortillas and bread. My goal with all the sniffing was just to find the ones that didn’t have that soap smell. But I definitely got a lot of comments on it inside the house. I hadn’t even thought about all y’all watching me, so that’s kind of hilarious.