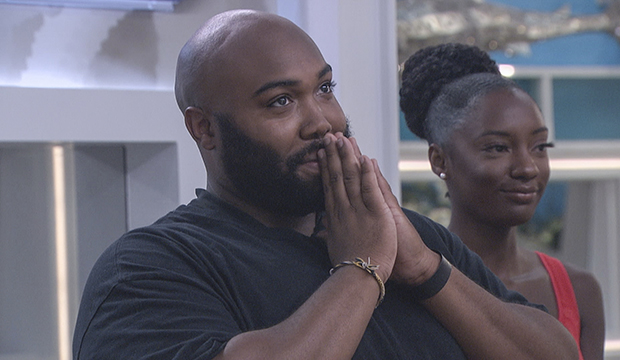 Remember how Derek F. said he wasn’t going to talk to Azah for the rest of the game on “Big Brother 23”? Yeah, that didn’t last.

The former (?) BFFs spent Tuesday, the last full day in the house, rehashing their feud and not really squashing anything. They each just kept saying the same thing: Azah is hurt by Big D belittling her and saying he carried her this whole time, and Big D is hurt because he’s done so much for her and in the game and she is going to cut him in third. Rinse and repeat. He feels betrayed and played, yada yada. The guilt-trip is real.

They took a midday break, during which while lounging with Xavier, Azah proposed an idea: They ask Big D who he wants to sit next to in final two, and if that person wins, they take him. If the other wins, they’d take the other person. Look, Azah seems like a nice person, but we’ve always known gameplay was not her strong suit. This is a terrible idea because everyone knows Big D wants X, so nothing would be different. X casually shot it down and started venting about Big D’s entitlement and how he’s guilt-tripping Azah.

“It’s the entitlement for me. We said in the final four the only person who deserved to be in final three is the person that won the competitions,” X said, adding of Big D, “You haven’t won a competition to put you in a position to earn your spot in those final two chairs.” He told Azah that Big D guilt-tripping her was “unfair” since she won Part 2. He then noted that Big D knew that Kyland was going to take X to final two and did not have a problem with that, but now his panties are all in a twist because Azah might take X. I think we all know what the difference is here.

“This whole ‘I cant believe Azah wouldn’t take me’ annoys me. If Ky was here, he would be banking on me to beat [Ky] because of our deal. He was perfectly fine with the reality of Kyland taking me. Now that it’s you, it’s an issue?” X said. “If you are all for this women empowerment and women doing what they need to do, why is it OK for a man to betray you — not even betray you, but why is it OK for a man to discard you but not OK for her to?”

Nailed it. Say it to his face next time. Azah and Big D reconvened for another pointless rehash of their sides. This time involved tears from Big D. He apologized for anything he’s said or done that has belittled her, but it inevitably veered back toward how he was hurt, what his accomplishments were, how he could’ve kept Ky and more guilt-tripping. “If I would have sent you home last week, how would you have looked at me?” he asked. “I think you would have been like, ‘The one person that said they had my back didn’t have my back.’ I have always made sure with my actions to be there for you.”

Really, if you’ve heard one of these conversations, you’ve heard them all. Big D did say he wants to enjoy their final hours in the house so they don’t look back on a “horrible day.” But the guilt-trip was working on Azah, who felt torn again. She told X that her mind was “scrambled” and she doesn’t know if taking X is the right decision. X told her to do whatever she wants to do and pointed out that Big D is just playing the guilt-trip card now. Azah, who had told X that she was cool with him taking Big D, said she wasn’t motivated by money and wants to make a decision she can live with. “If I make this decision about me, I take Big D because I feel like I can win against him,” she told X. “I don’t know why your game resonates with me and I don’t feel you should be third.” Azah’s goal is to award merit, not to win, which is wild when you’re in the final three of “Big Brother,” a game.

The rest of the night was chill, like usually how the final days of the game are. Azah did not make it clear what she decided, but it sounds like she’s still leaning toward taking X. There’s still Wednesday morning and afternoon for her to overthink things. Of course, all of this is irrelevant if X wins Part 3, which is probably what will happen.