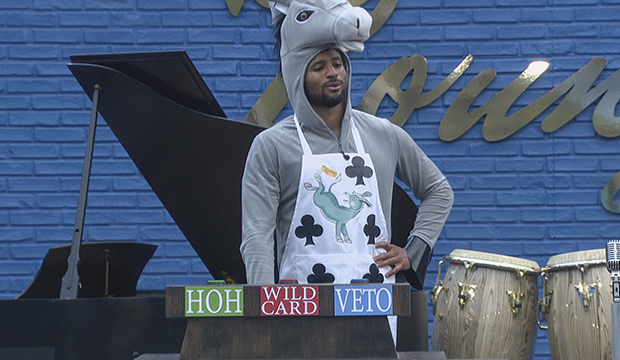 Wednesday was more of the same in the “Big Brother 23” house as Britini carried on her futile campaign while the scheming continued for next week. Oh, and the houseguests enjoyed the annual halfway party.

Britini will probably get a heads-up sometime Thursday that she’s leaving, but she still believes she has a chance to stay. She campaigned again on Wednesday to everyone, most of whom fibbed and said they were still undecided. It’s cute how the broadcast show has been trying to drag out the drama with these Veto cliffhangers the past two weeks, but the truth is there isn’t much drama and hasn’t been this entire season. We all knew who was going every week once the Veto ceremony was over and then it was just a three-day waiting game. Last week was the closest there was to a vote-flip between Tiffany‘s shenanigans and Christian‘s valiant campaign, but it was just never going to happen, especially with the Cookout prioritizing its collective mission.

There was discussion of possibly keeping Britini over Derek F., which is what Claire and Derek X. want to do, but it’ll be just that — just talk. The votes are not going to be there — Hannah eventually told DX she’s evicting Britini because Britini can win comps, while Claire told Alyssa that she doesn’t want to be on the wrong end of a 5-3 vote, so she’s not going to fight for the flip. Even if the Cookout didn’t exist, a flip is more or less a pipe dream unless the HOH calls for one in this modern era of “BB” in which people want to cater to the HOH, who has no power after noms are locked, for some reason. Kyland remained his usual exhaustingly vague self with Britini, but everyone else knows he wants her out.

Kyland, Derek X. and Xavier also met to discuss the vote and future plans, which, unbeknownst to DX, involves him likely being targeted next week. X knows he can be the one to take that shot at Derek X. if he wins HOH. Kyland doesn’t necessarily want to lose DX next and told Tiffany, who was trying to point the laser in another direction, that evicting him “is not our number one priority,” but next week DX either has to leave or use his BB bucks. Derek X. is basically assured $100 for the next two High Roller’s Rooms, which would give him enough to play for the coup d’etat the final week, and the Cookout does not want that to happen. But they don’t know what it would take for him to use his money. It’s also hilarious how Ky is trying to call the shots for next week as if he’ll reign as HOH forever.

Meanwhile, Claire and Derek X. continue to dance around figuring out the Cookout. They are so close, but they still haven’t put all the pieces together yet. Derek X. noted to Claire how he always sees Xavier and Tiff talking, and then asked her what it means when someone says they’re not going to put you up. “They are going to backdoor you,” Claire replied. “Why? Who said that?” “X,” Derek said. If that’s not enough to motivate Derek X. to go for HOH on Thursday, we don’t know what is.