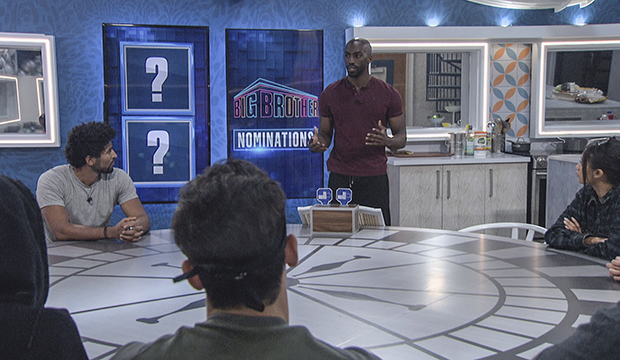 Operation Evict Brent — really Operation Blindside Brent — is going as planned for the Royal Flush on “Big Brother 23.” Christian won Veto on Saturday and will not use is on Monday, so Brent and Britini will remain on the block. It would be smooth sailing until Thursday if it weren’t for Britini, of course.

She is still losing her sh– that she’s on the block and is very offended the Veto won’t be used because she hasn’t done anything (if she thinks about it, maybe that’s why she’s up there — she’s not in any alliance) and thinks someone else can sit up there for three days after all she’s been through. Look, being a pawn and blockstar is ideal, but she’s also acting like she’s been a nominee for five straight weeks when it’s just the second week. Plus, everyone has made it very clear to her that Brent’s the target and she’s not going anywhere. Yes, people lie and pawns go home, so she’s not wrong to have doubts, but her melodramatic reactions are not helping her in the long run.

Also not helping her are the Jokers. They are truly living up to their name here. Frenchie really did a number on them. They mostly chill out in their room and don’t really socialize (aka build relationships and alliances) and are completely clueless about the house dynamics. Azah and Derek F. are lucky they have the Cookout because otherwise none of them would have a strong alliance. Britini is not part of any alliance — no final two or anything. Azah has become weirdly defensive of Britini because of… teams? She knows teams are gonna end soon, right? Azah was right that Britini was gonna lose it if she were nominated, but imagine volunteering to go on the block and throwing your game away for Britini. Both seem like very nice people, but they’re being way too emotional right now and taking things personally, and that’s not the way to play “Big Brother.” If they keep it up, people will see them as a liability and not want them in jury because they might vote emotionally. Britini demanded an apology from Xavier, about which Tiffany told Kyland. “I believe that ego is dangerous in this game. Anyone who says they are owed an apology is speaking from ego, so she is not as strong as I thought,” he said. Tiffany: “And she is getting a lot of information from the other emotional person in her room.”

SEE ‘Big Brother 23’ spoilers: Xavier is ready to carry out the Week 3 plan and the target has no idea

Thanks to the Cookout, Azah is in a better position than Britini, but things have become frosty between Azah and Tiffany because Azah is pissed at her and Derek X. for ganging up on Britini in the Wildcard comp. This would be fine if we didn’t see on Sunday’s episode that Britini was holding the card in her hands that would’ve eliminated Derek X., but she just froze and swapped the wrong card. Now, this doesn’t change the fact that Tiffany and Derek X. did team up against Britini or mean that she would’ve ultimately beaten Tiffany, but the entire house witnessed her failure to do simple addition, so it makes Azah’s indignation even more nonsensical.

Xavier did apologize to Britini Sunday night while also telling her that the Veto won’t be used and reiterating that she won’t be evicted. That’s still not good enough for Britini because she doesn’t like that they’re not telling Brent he’s the target and she wants to be up-front with him. Girl. Something tells us that even if she were taken off, she’d still be complaining about having been on the block. She later told Azah and Derek F. that if she wins HOH, her noms would be X and Christian with Alyssa as a backdoor or X and Whitney with either Christian or Alyssa as a backdoor.

Some other Week 4 convos initiated as well, with Alyssa and Whitney as the common names being tossed around. Whitney is the top name among the Royal Flush, but outside of it, Tiffany wants to break up Alyssa and Christian, whom Whitney has said she’s willing to target. Tiff, Derek X., Kyland and Claire then formed a new alliance called the Detectives with the possibility of adding Hannah at some point.

Meanwhile, Brent still has no idea he’s the target, so there’s that.