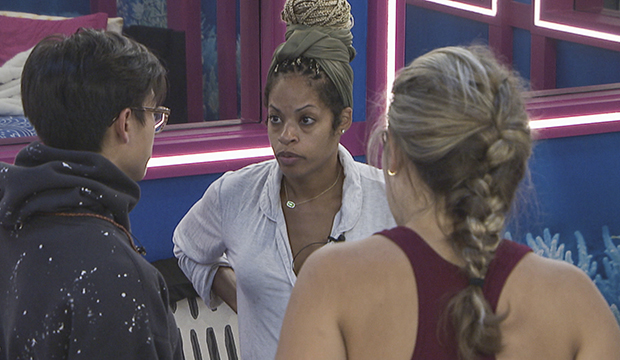 Minutes before the Veto ceremony on Monday on “Big Brother 23,” Derek X. told Alyssa of his plan to backdoor Christian, as he had discussed he might do to “test” her, so it was RIP blindside again. To be fair, Christian was blindsided — it just wasn’t at the Veto ceremony like we had all wanted. So now he’s on the block next to Sarah Beth and it sent him and Alyssa spiraling.

Christian quickly went through the five stages of grief and admonished himself for not backdooring Derek X. last week when he was the HOH and Veto winner. “I feel so f—in’ stupid!” he said. “I could have taken him out last week.” Somewhere Whitney is laughing her ass off. Hilariously, Christian and Alyssa are not pissed at Derek X. like you’d expect. Derek X. had explained his reasoning for the backdoor as an opportunity that had presented itself with Britini winning the Veto and having heard that Christian and Alyssa were after him. Christian and Alyssa immediately pegged Sarah Beth as the culprit who had told DX. Kind of amazing how everything becomes Sarah Beth’s fault, but that’s also a testament to how not necessarily poorly she’s playing but how well other people are playing. “Sarah Beth told you that we were coming after you because that was her plan. You knew because Sarah Beth told you,”Christian said to him. “I am not going to confirm or deny,” Derek X. deflected.

This eventually led to them ID’ing Kyland as an associate because of his closeness to Sarah Beth. Alyssa, who went into overdrive trying to save her man, also doesn’t believe Derek X. is smart enough to concoct this plan on his own and was instead heavily influenced for some reason, which is very insulting. Targeting Christian is a very obvious thing to do; it was just a matter of who would be willing to take the shot. Maybe they would’ve seen it coming if they didn’t isolate themselves all day in bed. “I am telling you right now [Kyland] knew everything. He orchestrated the whole thing. You think Baby D had the balls to do this alone?” she told the other Kings. “I think Derek is smart enough to come up with,” Sarah Beth said, defending DX’s intelligence. “I think he would have had to feel like he had the votes to send Christian.”

SEE ‘Big Brother 23’ spoilers: The backdoor is underway, but will it also be a blindside?

If Derek X. can come out of this unscathed, which very much looks like the case, then props to him. He gets the points for making a big move and taking out a big player without having to deal with the mess of the aftermath. Also coming out of this unscathed is Tiffany yet again. Girl is just too good at this game, especially socially. Even though she was very much part of this backdoor plan and pretty much every eviction so far, she knows know to throw the scent off of her by sucking up to the nominees. She consoled Christian, gave him campaigning advice and let him think there was a chance she’d vote to keep him even after flat-out telling him that she thinks she can beat Sarah Beth down the line but not him. Tiff still wants Sarah Beth out next week, but she confirmed that she’s evicting Christian this week and is just comforting him to cover her bases.

The rest of the day was more of the same flailing and campaigning, with several people semi-promising fake votes to Christian. Xavier had to some juggling/lying of his own to Christian and Alyssa and is not entirely happy to be losing a King even though teams are over, but the rest of the Cookout has no sympathy. The night capped off with Christian and Alyssa offering the Jokers a deal to be virtual HOHs during their reigns if they vote to keep Christian. This deal includes but is not limited to letting the Jokers choose nominees outside of them of course, have the HOH room, and pick the snacks and music. How can one turn this down, right? That’s what Christian thinks. But as Britini said after he left, “What we are going to do right now is we are going to play the yes game.”

Christian is not gonna throw in the towel, but his eviction is nearly signed, sealed and delivered right now.