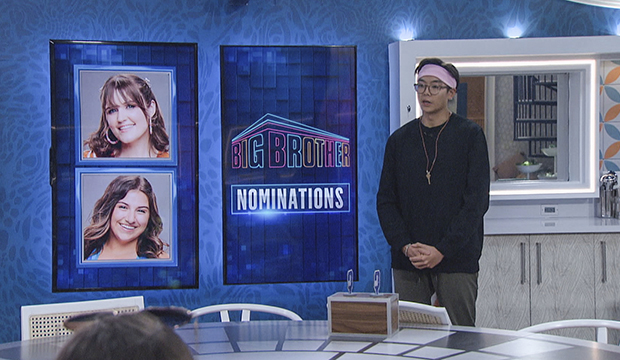 Tuesday was the most interesting Tuesday in the “Big Brother 23” house yet, which isn’t saying much because that bar is very low. Tuesdays are typically a big fat yawn since it’s not the immediate aftermath of the Veto ceremony on Monday and it’s too far removed from Thursday’s eviction. And in the case of this season, most people were resigned to their fate or were still oblivious to it. But Christian and Alyssa did their part to keep us entertained by continuing to campaign for him while everyone else tried to figure out how/when/if to tell Christian he’s leaving.

Christian and Alyssa made lengthy pitches to Derek X., which is hilarious because there wouldn’t be a tie this week so he won’t have a vote. Christian suggested a mutual three-week safety deal to Derek X., and between this and his virtual HOH pitch to the Jokers, you almost want him to stay to see him go through with these grand offers. Both he and Alyssa insisted that they were not after Derek X. and think Sarah Beth masterminded this backdoor plan with help from Kyland because Ky is “sneaky” and “sketchy.” Alyssa basically told Derek X. that she didn’t think he would have the balls/is smart enough to think of it on his own. “You are not someone that I want to come after because I think people persuaded you,” she said. “I’m not trying to say you didn’t make your own decision, but you wouldn’t have done this on your own.” Derek X. is probably dying inside, but really, just let her think you are dumb because it only makes her look worse.

But you know who is smart enough to drum up his own plan? Christian. He told Alyssa he plans to fuel Tiffany‘s growing paranoia about Sarah Beth. Tiff’s conspiracy theory about Sarah Beth possibly being America’s Player has morphed into her thinking that Sarah Beth is lying about her girlfriend IRL,, that Sarah Beth and Kyland know each other out of the house, and because of that, Sarah Beth and Kyland are trying to get to jury to get an extra paycheck. You cannot make this up. So Christian’s strategy is to say that he overheard them talking about splitting the check. “Tiffany already thinks Sarah Beth gets a fat check for making jury,” he reasoned. “Tiffany would put it together herself. … She is going to think the reason Sarah Beth is upset and they are together is because somebody knows about it.”

This brilliant scheme has been dubbed Plan Z, and Christian later told Britini that he plans to only activate Plan Z if Azah confirms that she is not voting for him to stay. He believes Azah is the swing vote based on his conversations and people (fake)  committing their votes. He told Britini that Plan Z would prey on Tiff’s paranoia, which Britini reported it back to Azah, and both were dumbfounded as to what that paranoia was. “Apparently she is paranoid about something,” Britini said. The Jokers may be more in the know this week, but they are also still very much not in the know. But please, “BB” Gods, let Plan Z unfold.

Britini still plans to evict Christian, but she’s torn because she likes him and dude turned on the charm when he campaigned to her. She’s also banking on Azah telling him first that she’s evicting him, so Britini could just use the excuse that she’s gonna do the same because he doesn’t have the votes. Azah has not yet decided when to tell him, but Tiff is getting impatient and annoyed and told the Jokers that they need to just tell Christian he doesn’t have the votes. This did not go over well with Azah and Derek F., who are frustrated with her pushing her agenda and think she’s upset that Sarah Beth is staying this week. If this keeps up, it might be RIP Cookout soon.