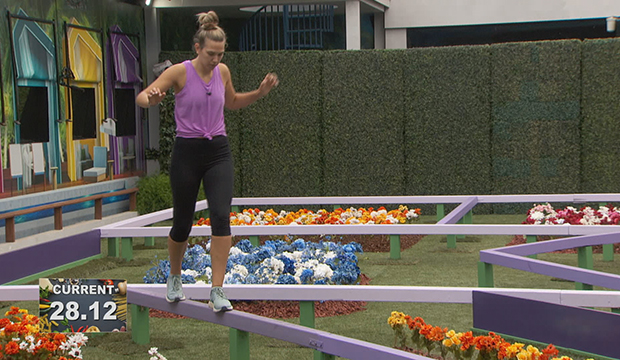 Another week, another predictable result. Sarah Beth put up Derek X. Monday on “Big Brother 23” after Xavier used the Veto on himself, so now it’s just a countdown until Thursday when DX becomes the second juror.

DX made a Hail Mary pitch to SB before the Veto ceremony, promising her safety, offering deals, telling her how others are after her, suggesting she take out his closest ally, Hannah, instead to hurt his numbers, and letting her weigh in noms if he wins Coin of Destiny next week. But he might as well have been talking to a wall because she would just stare at him in silence for like two minutes straight each time he was done talking. Is that better than Kyland rambling nonsense for 32 minutes? Probably. Sarah Beth sorta considered keeping him but not really, and then Kyland knocked any thought of that out of her head when he got the last word with her and helped her with her speech. Sarah Beth really thinks she’s doing something here, but wait ’til she finds out she’s being played hard like a fiddle. It’s both hilarious and pathetic how easily Ky can manipulate her. She also has completely wrong readings of dynamics in the house and does not at all suspect any alliance like the Cookout, which is already planning her demise next week. Bring the popcorn.

Derek X isn’t giving up, but the odds are very much against him to stay. X and Ky do not want that to happen and they’re the ones running the Cookout, which functions with a “what’s best for the group mentality.” X, Ky and Derek F. met to discuss how to take out the Cookout women and how much easier that will be without DX since the women cannot win comps. And Big D can? DX saw the Cookout guys’ covert meeting, along with the meeting between SB, Ky, X and Alyssa, during which they formed the Monarchy. SB and Alyssa are ecstatic about this alliance, but this is just another cover for the Cookout. DX told Hannah and Tiffany about these clandestine meetings, and while they’re of concern, neither of them at the moment are strongly advocating for him to stay even though they want/need him to in order to go far. Hannah flat-out told DX that she’ll be in people’s ears but she’s not gonna campaign hard for him because that backfired for Alyssa when Christian was up (did it though?). Just kick a man while he’s down, huh. “I think that this is the most guilty that I have felt in a very very long time,” Hannah cam-talked. “The fact that if he goes home this week and I could have done something to prevent that but I didn’t, I am going to feel directly responsible for sending him home.”

Tiff hasn’t tried to outright flip the vote yet, but she did ask Kyland if there’s any way DX could stay this week. “It’s not my decision as a sole individual. I just cant imagine any scenario. I feel like it’s good for me like it’s good for you to keep him, but it makes the six a lot harder,” he responded. Just a simple “no” would’ve sufficed here, dude. But what Ky’s really saying is that DX staying makes it a lot harder for him and X (and Big D). It’s better for the Cookout women if Derek X. stays. And if the Cookout were just a regular alliance, this would be the point where they turn on each other, but alas.

Meanwhile, DX and Claire continue to dance around the Cookout. If I had a penny for every time they talk about it and then just sorta laugh it off… This time, they’ve come the closest, nailing it down to a six-person group running the house and naming almost every single member, but the “aha!” moment never came. Instead, they dismissed it as probably not a long-lasting alliance without a name. Oh, you guys. But they did bond some more when Claire revealed she had lied about her job and where she lived (she said Queens instead of the Upper East Side) and over how Kyland has played them. DX said he doesn’t think he can watch the show back. “I can feel the salt already,”he said. “He f—ed us over and all he’s doing now is kissing our ass trying to get a jury vote,” Claire added. Not wrong.