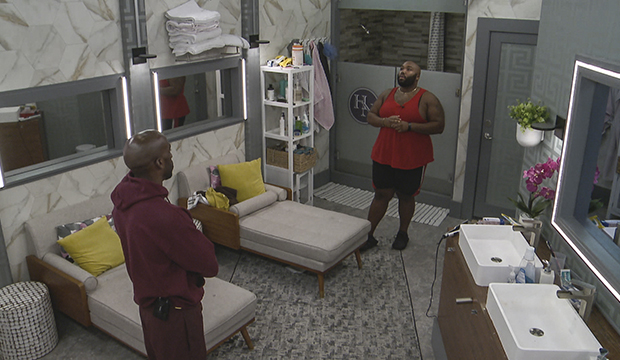 Tuesday was another long and slow day in the “Big Brother 23” house, except unlike the past few days, there was fewer game talk than ever. That’s because nothing has really changed.

The situation basically remains the same. Xavier wants Kyland out and wants Derek F. to cast the sole vote, but while Big D has said he will do it, he still has reservations. Azah is willing to do it, no questions asked, but that requires X using the Veto on her, which would show his hand to Ky and possibly cause him to lose his jury vote. X has repeatedly said he will pull Azah off the block if he feels like he can’t trust Big D to carry out the plan.

SEE ‘Big Brother 23’ spoilers: Xavier and Azah are annoyed with Big D — and with good reason

While Kyland was in the DR, the three of them had a pow-wow about the situation and whether to tell Ky. X said Ky needs to be a blindside because of how he is and he would be “up your ass 24/7” campaigning if he knew he was going. Facts. We all know campaigning is not the issue here but how Ky holds you hostage for at least two hours to talk your head off. That’s also why X doesn’t wanna do any one-on-ones, but also there’s not point at this rate to hold them. Big D can’t believe he has to evict Ky, but forlornly he said he will do it and “break his heart.” Azah enthusiastically volunteered as tribute: “I will do it! I am foaming at the mouth to do it!” It would be fitting for Azah to pull the trigger after Ky saved X during her HOH last week, completely ensuring it to be a total flop.

Azah and X reassured Big D that it was the right thing to do and pointed out how every time Big D was on the block, it was because of Ky. Big D plans on saying that Azah has been there for him since the beginning and would fall on the sword for him while Ky would not. Later, he told Azah that he must evict Ky for jury optics and his resume.

So for now, Big D has hyped himself up back into booting Ky, but X is ready to execute Plan B if he has last-second jitters. Big D’s mood can change on a dime, so it’s just a waiting game here until the live Veto ceremony and vote on Thursday to see who will do the honors.