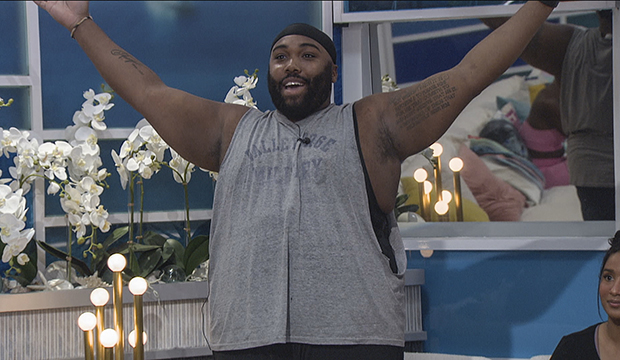 Xavier‘s Plan A is a go for the final regular eviction of the season on “Big Brother 23.” Derek F. has gone from feeling torn about evicting Kyland to practically giddy he gets to do it after a fateful conversation on Wednesday.

Kyland made the tactical error of telling Big D that he was being too cocky bragging about everything he did in the game and how he’s responsible for the Cookout’s success. This is hilarious since, last time we checked, Ky was the one who claimed that Big D did a lot of stuff that we didn’t see — even though there are 24/7 feeds — when he voted to evict Hannah last week. But Big D continues to live in his own mind because LOL. He truly does believe he was doing something besides sleeping all summer. Ky’s comment set Big D off on a lengthy rant blasting Ky and insisting that he himself is not cocky because he’s stating facts. The lady doth protest too much.

“You going to tell me that I’m cocky because I made a true statement? Everything that has happened so far this summer, I have played a part into. That’s not cocky, that’s just straight facts,” Big D cam-talked. “Do I make it clear that I’m running the house? Yes. Do I make it clear that I played a part in a lot of things? Yes, but I’m not f—ing cocky. If you want to call that cocky, let me show you how cocky I am when I send your ass home tomorrow. His tone is always arrogant, his tone is always he is smarter than everybody, his tone is that he likes to try to manipulate your words and make you feel you said something you didn’t. He likes to play games. I’m not stupid.”

SEE ‘Big Brother 23’ spoilers: Xavier’s Plan A looks like it will be executed… for now

Big D is not wrong that Ky speaks in an arrogant, holier-than-thou manner and talks down to people, but his air of superiority is only matched by Big D’s level of delusion. Running the house? Sure, whatever you wanna tell yourself. But two things can be true: Ky is arrogant, and Big D is acting cocky talking about all the stuff he allegedly did… that he did not do.

All this just amped up Big D to want to evict Ky even more. He rehashed it to Xavier, who had his own exchange with Ky, who had asked if he needs to pack thoroughly. X told him he’ll “be good.” “He asked me, ‘Should I thoroughly pack?’ I was like, ‘My sh– is packed and I am safe.’ Everyone should,” X told Big D. X wants to make Ky feel like he’s staying so they can blindside him. He and Big D hope the Veto ceremony and vote happen in quick succession so Ky doesn’t have time to think after X’s speech announcing he won’t use the Veto. “I’m going to be like, ‘In this game, there is a difference between someone’s ability to do what needs to be done and someone’s willingness to do what needs to be done. Big D has been my most trusted and loyal ally. I think he will do what needs to be done,'” X said.

This plan is so locked that they then discussed how they need to cut Azah in third because she’s “got all the votes” to win. I mean, she definitely would against Big D if she cuts X. Big D told X that there are certain people who deserve to be in the final two. “When I look at everyone’s gameplay, that’s only you and me. That’s not me being cocky,” he said. This is all high comedy.

It’s unclear how safe Ky feels after X’s reassurance since he has suspected he could go, so it might not be the complete blindside that X and Big D want. Regardless, unless Big D has a change of heart in the moment, Ky will be the eighth juror.