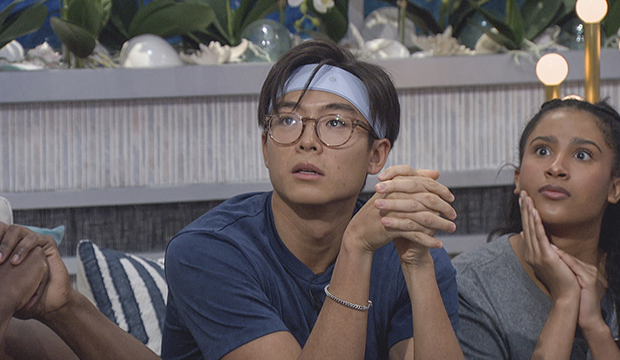 After four pretty ho-hum evictions on “Big Brother 23,” we are in store for some potential fireworks this week because the plan to backdoor Christian is a go. Derek X. will renom Christian on Monday after Britini uses the Veto on herself, so it’ll be King vs. King (Sarah Beth) on the block, and the one with the most comp wins so far will be the last pre-jury boot.

It was not easy getting here, made more complicated by the fact that the Veto was the prizes and punishment comp and Sarah Beth opted to take the cash prize over the Veto. That pissed off Alyssa and Christian, who are ready to boot her. Tiffany, of course, has been on the Evict Sarah Beth train the longest, so she continued to plant seeds about Sarah Beth’s threat level whether for this week or next. At one point this weekend, she even asked Kyland how he knew Sarah Beth outside the show, and he was like, “I don’t.” She also doesn’t believe Sarah Beth has a girlfriend. The Vanessa Rousso is jumping out.

But Tiffany confirmed on Sunday night that she is aboard the Backdoor Christian Express now. “We are backdooring Christian. Tomorrow he will be going on the block. He has no idea. Xavier understands the plan. He realizes that in order for it to be fair, we all have to have one person. He has two,”she cam-talked, referring to her Cookout plan of each of them having a side partner. “Christian and Alyssa have this whole elaborate plan on how they are going to eliminate people from this game. It does not align with my plan and Christian is not even going to be here after Thursday.”

SEE ‘Big Brother 23’ spoilers: A backdoor plan is in motion for Week 5

Everyone at this point knows about the backdoor plan except for Christian and Alyssa, who believe another Joker is going up. They believe that because Derek X. has lied to their faces. They think Sarah Beth will go on Thursday and Alyssa even wants to give her a heads-ups. Little does she know that Hannah wants to give her a heads-up about the backdoor on Monday so she could be prepared (and possibly prepare Christian). Don’t these people know we want drama?! At least Sarah Beth, whose birthday is Monday, knows that sh– could hit the fan. “Maybe I should do my birthday tonight,” she told Kyland on Sunday. “If I do it tomorrow, it really is going to be Keesha‘s birthday.”

The real question for the Veto ceremony is whether Christian and Alyssa will be blindsided because Hannah is not the only one who was to give Alyssa a heads-up. Derek X. is also considering letting Alyssa know about the backdoor plan beforehand. “I am going to ask her what she wants to do. I’m fine with her telling him. Nothing is going to change,” he told Tiff and Claire. “I’m just curious whether or not she will cut those ties with Christian.” I mean, she won’t, but Derek X. is understandably trying to salvage whatever will be left of his and Alyssa’s relationship because you know she’ll be coming for him next week. His tentative idea is to tell her that he was not thinking about a backdoor until his OG “target” Britini won Veto.

But regardless if this ends up being a blindside or not, it’ll definitely be a backdoor. It’ll be hard to top Keesha’s birthday, but all the pieces are there for Sarah Beth’s birthday to go down in “BB” history.