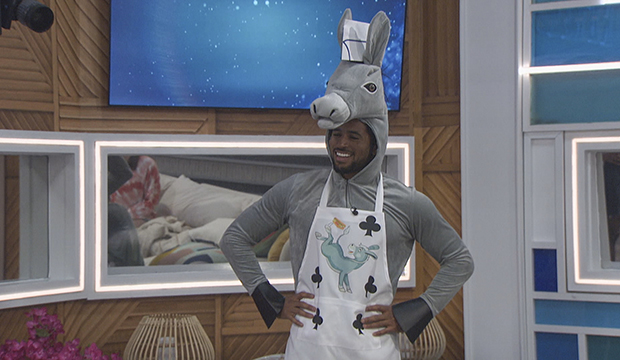 Two unnecessarily complicated things will make this a very long week on “Big Brother 23”: the High Roller’s Room and Kyland as HOH. The former has too many bells and whistles, while the latter is just a hot mess as HOH as the target has now shifted from Claire to Britini. And things could soon get complicated for the Cookout if Claire and Derek X. put two and two together.

The pair had a lengthy convo Sunday afternoon during which they basically clocked the Cookout without explicitly saying it. They talked around it in a playful, joking manner. Derek X. pointed out that all the white guys are gone and Claire said that the first five evictees were white. Then she cracked, “Is there another alliance in this house that I’m not a part of? These people are like, ‘We can’t vote out the only white person left.'” She and DX had a giggle fit and then bowed down to this hypothetical (but very real) alliance. “If that is true, best game I have ever…” Derek X. “Honestly, so many props. Never saw it coming.” “Seriously, amazing job,” Claire added.

The moment we've been waiting for. Claire & DX finally speaking it out loud for the first time.

They are both right there. So close yet so far to the Cookout getting exposed. Honestly, the more likely scenario is that Claire and Derek X. have each figured it out in their minds but are too afraid to say it out loud. They’re both smart cookies and this exchange ought to confirm to each of them that something might be up, especially combined with how chaotic (again) Kyland has been as HOH and seemingly making decisions (ahem, nominating Claire) that do not benefit their Detectives alliance (remember that one?). Claire and DX also discussed the possibility of flipping the vote to evict Derek F. but don’t think it’ll work.

SEE ‘Big Brother 23’s’ Christian doesn’t regret all those comp wins, but he does regret not having a ‘better social game’

Luckily for Claire, she is no longer the target. After the High Roller’s Room on Friday, Britini became the backdoor option, mostly because she got $100 BB bucks. Everyone figured that she got $100 because she was happy after the comp and Xavier doesn’t want to risk her collecting more money and winning powers when Claire only got $50 this week. Plus, with Britini gone, Azah and Derek F. won’t have to play mama and papa bear to her anymore and could focus on the Cookout. The Cookout is still fraying at the seams, but Xavier is doing his best to hold it together and once again played mediator between Tiff and Azah on Sunday. This is like their 34th truce so they’ll start fighting again in approximately 20 hours.

The backdoor can proceed since Alyssa won the Veto and Kyland, who bet on her, won the second Veto. Alyssa is not going to use hers so Kyland will use his to save Claire and then renom Britini. Derek F. was on board with the plan from the start while Azah was informed of it on Sunday. She is not happy about it and it’s killing her not to tell Britini, who is completely in the dark about what’s gonna happen. Britini thinks Derek F.’s leaving (also because he’s acting like he’s the target) and has been helping him strategize to stay. Awkward. If Kyland goes through with this, the feeds will be lit Monday afternoon.

The key word here is “if.” Derek X. has come up as a renom option a few times, but Kyland still seems to be leaning toward Britini, but really, who knows what he’ll do? Dude is an enigma — of the annoying, not interesting, variety — and has pissed everyone off this week with his endless meetings and frustratingly vague responses. Azah called him “Brent with a better vocabulary,” which is the sickest burn. It’s a real Frenchie situation developing and he’s lucky he’s in the Cookout otherwise everyone will be coming for him.