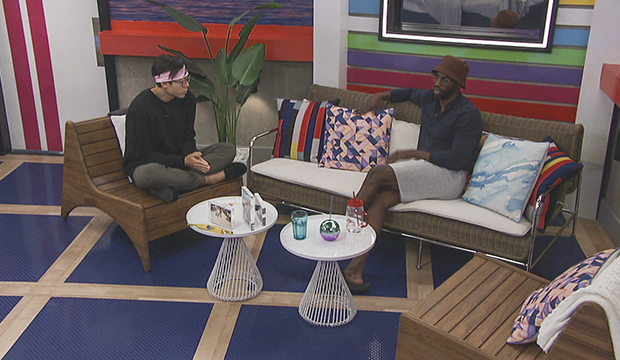 Well, that was fun. We got our most interesting week yet on “Big Brother 23,” resulting in a successful backdoor with Christian as the final pre-juror. Week 6 could be interesting, but will it be? Kyland won HOH again, making him the first repeat HOH of the season and the sixth straight male HOH, and he has a lot of people to protect.

First of all, Kyland didn’t even want to win HOH. It was a knockout memory comp in which the houseguests choose the next matchup. It came down to him and Tiffany, and he apparently tried to throw it to Tiff, who got the answer wrong. Yup, she Da’Vonne’d herself. So now he’s HOH again and has limited options for nominations. He’s not gonna target any Cookout members or Derek X., one of his closet non-Cookout allies, which leaves Sarah Beth, his other closest non-Cookout ally whom most people (read: Tiffany) want out, Alyssa, block star Britini and Claire.

At the moment, Kyland has landed on Claire. He floated some block configurations, including Tiffany, but it sounds like he’ll go with Britini as the other nom. During Britini’s one-on-one, she offered him safety and a bunch of stuff, including tell him how much “BB” bucks she gets and what power she wins, which he didn’t immediately accept, and she asked for a heads-up if she’s going on the block, to which he didn’t also commit yet. Claire, meanwhile, has no clue her face will pop up when he turns that key on Friday. “I feel like I can move forward with Ky in this game,” she told Tiff and Derek X. “He is trying to out-strategize everyone. That’s OK with me as long as I am part of that. I don’t need to be the person that would take him out.” Too late. Kyland will probably tell her that she’s the pawn, but if she stays on the block and realizes she’s the target, she’ll just be utterly flummoxed unless she can put the pieces together about the Cookout. She’s come close but no cigar yet.

Speaking of the Cookout, things aren’t completely pristine between them. This is what happens when you put together a bunch of people who don’t normally get along, but they’re trying to stick it out for the greater good. And they are trying. Tiff and Azah sort of reconnected over their mutual distrust of Kyland and annoyance that him being HOH means Sarah Beth likely won’t be targeted, but this is such a fragile relationship that any little thing could rock the boat again. Tiff and Ky then tried to reconnect over their “miscommunication” or lack of communication in recent weeks. They both agreed to do better, but it was probably mostly talk. Kyland keeps things close to the vest, while Tiff is a master at kissing ass to whoever’s in power or on the block so she’ll be off their radars. Tiff is also aware that Claire, her side ally in the Cookout plan to final six, is likely leaving, which she cam-talked was OK with her.

Xavier, by far the most committed member of the Cookout, had another existential crisis over the Cookout’s mission. He feels terrible about sending Whitney and Christian packing and hope they are not mad when they watch the show and discover the group. “I just cant put y’all above something that’s above myself. I don’t know if they are going to see it like that,” he told Tiff, who admitted, “I don’t know if we are playing the game right.”

Xavier noted that there are dominant alliances every season, but the difference is that those other ones are majority, if not all, white. “The reason why we are doing what we are doing is ’cause in no other season have people who look like us even had the chance to do what we are doing,” he said before rattling off a list of former Black players that sounded like an “In Memoriam” segment. Tiff believes that once everyone watches the show, they will “understand that it wasn’t malicious.” “We are doing something that for 22 seasons no one has been able to do before,” Xavier added. “We feel this almost inherent duty that we have to do it.”

Despite the fractures in the Cookout, if anyone’s gonna keep the group together, it’s Xavier as long as he’s in the house. The real question now, as the numbers whittle down, is if anyone in the house will figure it out.