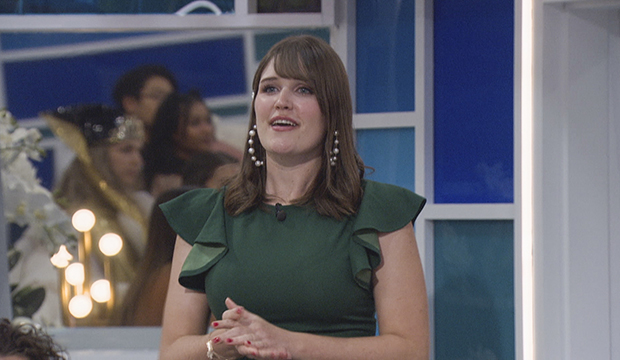 Sarah Beth winning HOH on Thursday’s “Big Brother 23” — and becoming the season’s first female one to boot — may be just what the doctor ordered to shake up this game that looked on the verge of a Cookout steamroll. The Cookout may very well continue to dominate, but any non-Cookout member in power automatically makes things more interesting (at least at first).

The initial fear of Sarah Beth being HOH is that this could become a third Kyland HOH with him trying to manipulate her — and he very much is trying to do that. But SB claims she’s gonna let that happen. “This is going to be my HOH and it’s going to be what’s best for my game,” she told Azah. “I want to make sure nobody thinks this is going to be Kyland’s HOH.” What makes this even better is that Xavier has been complaining the past few days to the Cookout guys about how Tiffany and Hannah could not “control” their pawns, Claire and Derek X., like he could with Alyssa because Claire and DX were thinking about saving Britini. Sorry people have minds of their own, dude! He definitely thinks that he, as a former King teammate of SB’s, and Ky can influence Sarah Beth this week.

It’s unclear who Sarah Beth will nominate at the moment — and honestly, it doesn’t even look like she knows, but there is one person she’s suspicious of. She held one-on-ones with everyone Thursday night in the complete opposite manner of Kyland’s soulless, interminable and incomprehensible meetings. Hers were quick, efficient and conversational — already a non-Kyland HOH. SB’s goal is to flush out the money this week and get the roulette power used, so she asked everyone if they’d be willing to play in it if they had enough money. Mostly everyone said yes, though Derek F. continued to lie about how much BB bucks he got last week, denying it wasn’t 100. Sarah Beth plans to give people a heads-up if she’s nominating them and also expects at least one of the noms to come off with the roulette. Kyland volunteered to go up to force Derek X. to play roulette for him, but SB doesn’t want to risk it because she doesn’t think anyone else would save him and she thinks it might be good for DX to save his money to play for the coup d’etat next week to protect them both. She told him that if she has enough people volunteering to play this week he won’t have to.

SEE ‘Big Brother 23’ spoilers: Hope for a vote-flip dies as Kyland tries to set an ultimatum for Week 7

Derek X. is obviously a target of the Cookout guys, especially Xavier, who was trying to push for Tiffany and Claire as initial noms and advised Big D to pitch that as well. Unbeknownst to them, Tiff and Claire are likely safe because Sarah Beth wants to continue their Jackpot alliance (who even remembers this existed? Tiff sure didn’t). This is hilarious because Tiff absolutely loathes SB’s guts and has been wanting her out for weeks. She and Azah had an SB bashing session after the HOH, and next thing you know, Tiff walked into her one-on-one and SB was like, “Yay Jackpot!” Sarah Beth has no idea Tiff has been dragging her name through the mud in this one-sided feud or that she’s been spreading rumors that SB might be America’s Player and that her girlfriend, Shelly, is not real. Tiff was shook by SB’s Jackpot allegiance — the power of her mist — and ended the convo by saying she hopes SB gets a picture of Shelly (she did, and a letter from her as well).

Of Tiff and Claire, SB clearly trusts Claire more and later noted to Ky that Claire walked into their one-on-one excited and celebratory while Tiff did not. SB was much more open with Claire, telling her and later DX what Alyssa had told her earlier: that Tiff looked annoyed when SB won HOH instead of DX. SB thinks Alyssa might be lying and mentioned past examples of possible Alyssa lies. “I know she and Christian told me [Hannah] was coming after me and told [Hannah] I was coming after her,” SB told Claire. “And [she] tried to convince her I was the reason she was on the block.” SB later told Derek X. and Ky that Alyssa did an intense eye stare when talking to her and the only other time she did that was when Christian was in danger. SB also revealed that she feels like everyone listens to her except, ironically, her two remaining former Kings teammates and that Xavier in particular shuts her down when he’s made up his mind. Clocked.

If SB targets Alyssa, that would not be ideal for her game since the non-Cookout people need to work together, though none of them know that yet. For the Cookout, they would just lose another pawn, even if it’s not the one most of them want to go. But it would be high comedy if Alyssa got evicted for telling the truth. No matter who SB nominates, things could get very messy after roulette and Veto.