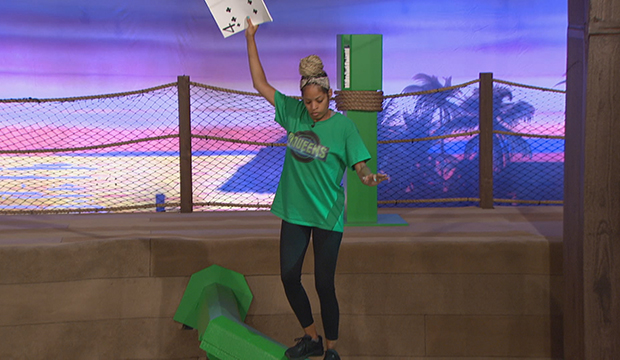 Wednesdays are about campaigning and plotting in the “Big Brother 23” house and that’s exactly what happened. Brent, still oblivious that he’s about to go out the door, and Britini, did rounds with everyone to confirm votes, but the day was dominated by Tiffany gaming harder than she’s gamed so far.

After having some misgivings about the Cookout on Tuesday, Tiffany woke up Wednesday as a woman on a mission. She’s now all in on the Cookout and has a master plan to get them plus unofficial member Hannah to the final six. She held several meetings with the members to inform them, but essentially the idea is that they each have a side ally/plus-one they would take throughout the game until it’s time to cut them. And unless two members of the Cookout were on the block together, they would always have the numbers to keep the Cookout intact.

Tiffany sort of brought Hannah into the Cookout, except she didn’t tell her the name, so she’s still an adjacent member. She told Hannah the plan and suggested she lock things up with Derek X. because he’ll be her person in this scenario, which she did later (Tiffany also separately encouraged DX to do this). Tiff also withheld certain info from Hannah, telling her that only Kyland and Xavier know the full plan. She also warned Hannah that she’s likely going on the block if the Kings win HOH on Thursday alongside Whitney.

Azah later accidentally dropped the Cookout name to Hannah and tried to cover it up. It’s dumb not to officially make Hannah  a member in the first place, especially since you’re using her to get the group ahead, but Hannah is smart enough to figure out there was more too that. Azah is still a terrible player, which she has admitted herself. She can’t keep her emotions in check and just bullsh– people. Things have been frosty between her and Tiff since the Wildcard comp that Britini lost and they continued to butt heads when Tiff told her and Derek F. about the grand Cookout plan. Tiff doesn’t think Whitney should be the Week 4 target because then there won’t be a target after Alyssa and Christian. Azah objected and when Tiff asked her what her plan was, she said she didn’t have one.

Later, Derek F. lectured Azah to get her sh– together and learn how to play “Big Brother.” Kind of hilarious because it’s not like Big D is that much better of a player, but maybe he was just held back by Frenchie. One week without him and Big D can play with clarity. “Azah, I love you, girl, but you are making this so tough for me. I need you to bullsh—. Find it and figure it out. If not, you are going to fuck up both of our games. Any time any of these motherf—ers say a plan, [say] ‘Love that! That is great!'” he said. “You cannot sit here and do a ‘I don’t care. Whatever you want to do. I’m not agreeing with it.'”

After Azah was gone, Derek F. cam-talked, “If everyone can’t get it together, I am sending them home. I’m here for the money, I am not here to play games. You either get with the program or get out. You are not going to mess up my game.” Love the new and improved Big D.

There were various convos the rest of the day about boot order and who should win HOH, but it’s really all irrelevant until we get a new HOH. Everyone has their own preferences, but Whitney is still the default pick for most of the house. Things are gonna get messy now with so many alliances and no consensus target like the past two weeks. As for Brent, he was convinced he’s staying. People, including Whitney and Christian, dropped hints here and there, and the latter accidentally slipped up, but Brent still seems to think he has the votes even without Christian or is just choosing to be in denial. Hannah said she hopes Julie Chen Moonves does the classic fake-out and say, “By a vote of 11-0… Britini, you are safe.” If she doesn’t, we ride at dawn.