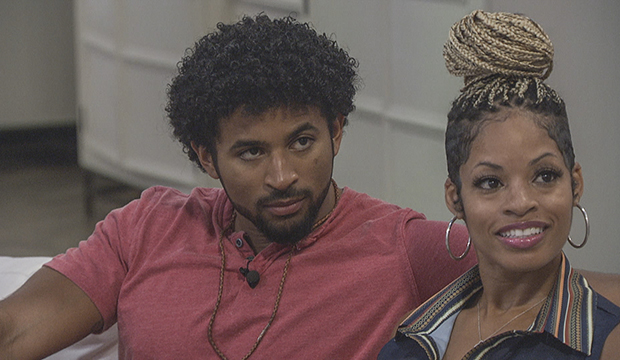 It’s going to be another straightforward week on “Big Brother 23.” Whitney‘s the target and Hannah‘s the pawn, and the plan to get the former out the door is in motion. Next week could get interesting though with a new target emerging.

Christian won the Veto on Saturday, making him the second HOH/Veto holder this season after Kyland. That’s four comp wins for Christian now. He might wanna cool it before that target on his back gets bigger, but this group also keeps hemming and hawing  about who should win HOH and who should split up Christian and Alyssa that they’ll both probably cruise into the top eight.

Whitney has figured out she’s the target and she made a pitch to Christian on Sunday to save her and renom Derek X., but it was futile. Christian confirmed afterwards that he’s not using the Veto. The guys also don’t want to lose a fourth dude in a row and they’re already fretting about the jury being majority female because, you know, obviously women only vote for women.

SEE ‘Big Brother 23’ spoilers: Christian has a target, but half his team is zeroing in on a different one

So as usual, planning for the following week started. Week 5 is the final pre-jury boot and we might finally lose a King because Tiffany put in the work over the weekend to make Sarah Beth the target. Sarah Beth, of course, has been pushing for a Hannah eviction this week and has not let up on that. Tiffany cannot let that happen to a Cookout member/ally, so she started trying to convince people that Sarah Beth might be America’s Player or is just playing the game to win AFP. She told Derek X. that Sarah Beth is “way too smart and playing her game very low-key. “The fact that she is gunning for Hannah so hard,” she continued. “She was loud, she was pointing, she was very adamant on how nobody was saying Hannah is reason why she is a threat in this house.”

This is hilarious because every season someone in the house wonders if someone else is America’s Player, which is only half-serious and ultimately goes nowhere since the show hasn’t done that in ages. Tiffany, who later cam-talked that she needs Sarah Beth to go because she’s bad for her game, is getting ahead of it by planting the seeds to get Sarah Beth booted next. And honestly, it’s not a terrible strategy. Sarah Beth is smart and everyone can see that. But she’s also been very aggressive in her campaign to get rid of Hannah, which, now combined with Tiffany’s theory, is just suspicious enough to make people go “Hmm.” Sarah Beth and Kyland have had several terse exchanges over (not) targeting Hannah as well, so this could also be what tears them apart since Kyland is going to prioritize the Cookout even though Tiffany thinks he might prioritize Sarah Beth over them. This is the impending drama we’re here for. Also shout-out to Tiffany because she does not have an off-switch when it comes to gaming. She’s like Vanessa Rousso but without the volatile paranoia.

It’s a long way until Week 5, but Sarah Beth could be up against it because the Cookout will not save her and teams will be over after this week, so it’ll be everyone for themselves. Xavier told Derek F. that Sarah is the King he’s willing to sacrifice, though they also discussed Derek F. taking a shot at Christian next week. If only they knew HOH is endurance. But for now, Christian won’t use the Veto on Monday so the countdown to Whitney’s eviction will officially begin.