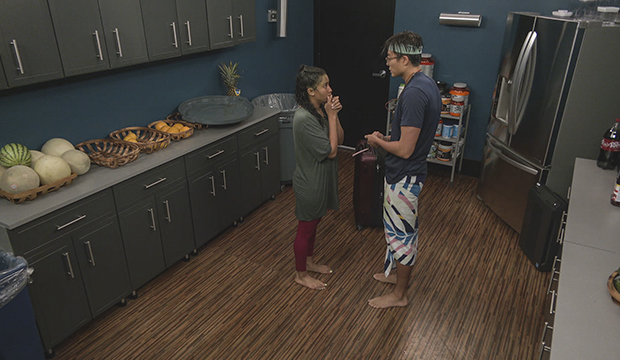 Don’t say we didn’t warn you this week on “Big Brother 23” would be crazy. Wednesday’s broadcast episode ended on a cliffhanger, but the real drama was what happened inside the house on Wednesday. There arguments, tears and a near vote-flip.

It was all a continuation of the night before when Azah and Derek F. got annoyed with Tiffany for ordering them to tell Christian they weren’t voting to keep him. Azah and Derek F. were still fuming Wednesday morning, ranting about how Tiff is a manipulator (true) and was just trying to cover her own ass. “I don’t give a f— about covering her ass,” Azah said. Tiff did her own venting to a bunch of people, including retelling the previous night’s events to Derek X., who asked what the temperature was like in the room, and Tiff said, “Hot!” Not wrong. She also bitched about how Azah “doesn’t believe a f—ing word that comes out of my mouth,” which is really only hilarious to us since we know what Tiff is really like, and she added that she trusts Christian more than Kyland.

This is when the gears in her head turned and went full speed ahead. Trying to cover her bases, Tiff told Xavier that “if I flip this house” she needs to make sure she doesn’t lose Derek X. and that Christian will not target him. She said she could get Claire to vote with her, so combined with Alyssa‘s and Xavier’s votes, they would just need one more. She brought up Derek F., and in a previous week, that probably would’ve worked, but Big D was not here for any of Tiff’s nonsense and was committed to booting Christian. Big D has spent most of the game either by Frenchie‘s side or in bed, so it’s nice to actually see him hold his ground and fight for something.

SEE ‘Big Brother 23’ spoilers: The target hatches a Plan Z, and we need to see it activated

This is when things get murky. The feeds went down and apparently so did a fight between Tiff, Derek F. and Azah. Here’s hoping they show the whole thing on Thursday’s episode. Whatever happened here flipped things back to the original plan of evicting Christian. Based on Tiff’s subsequent convo with Xavier, they decided to prioritize the Cookout once again. Xavier then cam-talked an apology to Christian. “I tried. You’re my boy,” he said. “Tiffany was ready to flip the house, but we can’t jeopardize this [the Cookout]. This means something way bigger, man, and I hope you can understand that.” The thing about the Cookout is that a regular alliance would probably just disband now with so much distrust and animosity between members, but the Cookout is trying to see it trough for a greater cause. This definitely won’t be the only time the cause conflicts with game.

Xavier gave a heads-up to Christian, who did not activate Plan Z but eventually released Britini from the burden of feeling like she might have to keep him. He told her she can evict him if the votes aren’t there so she’s not in danger going forward. Britini had a sobfest, during which Tiff told her she wanted Christian to stay as well, but the overnight drama changed everything so she’s still evicting Christian. “I was about to flip this damn house,” Tiff cam-talked. “Don’t y’all wanna see this house flip? Don’t you?” We do, but it’s also a case-by-case basis. For such an astute player, Tiff should be able to see that Christian is exactly the type of player that a majority of the “BB” fandom wants to see leave.

The night ended with Christian accepting his fate. He wanted to hold a house meeting to call out Sarah Beth, Kyland and Derek X., but Xavier and Alyssa talked him out of it because that would only hurt their games. He now plans to hold one-on-ones on Thursday to say goodbye to everyone. “Every single white dude is gone. The first five people that leave are white. There will be three white people left,” he noted to Alyssa after looking at the memory wall. “Very diverse season, which I’m sure is being received very well, which is good.” Who would’ve thought Christian would come the closest so far to figuring out the Cookout?