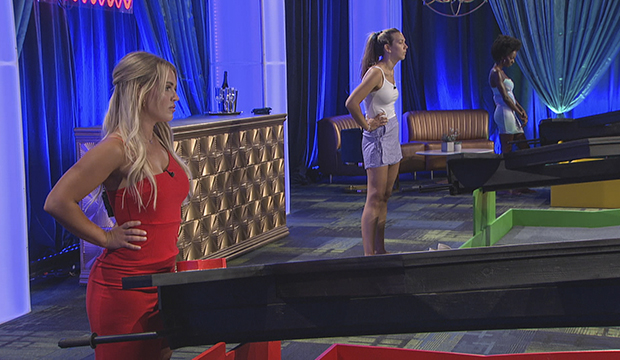 Wednesday is campaign day on “Big Brother 23” and that’s exactly what Whitney did. Unfortunately for her, that was not going to make much of a difference as everyone is already focused on next week.

Props to Whitney for giving it a shot. She made some interesting, if not, compelling pitches to people. She told Christian, who would only vote in the event of a tie, that she wants to work with him and the Kings and threw her own team under the bus, specifically Derek X. “The main person I think would be capable of taking a shot at you is Derek X. I don’t believe he is working with you guys,” she said. “If you would keep me, I would be more likely to be like [to Derek X.] ‘F— you.’ I’m going to throw the comp and let the Kings take you out.”

Christian, who had previously agreed with Derek X. that they’ll act like they’re going after one another, just nodded along and said he sees Derek X. as a shield. Whitney, desperate, then made a bunch of promises, including that she would vote for Christian to win over a woman if the woman didn’t play a good game, she won’t target him next week if she stays and that she would nominate Kyland if she were HOH. “Straight up, your arguments are better than the ones Hannah had,” Christian said, putting forth his best acting performance yet.

Later, Alyssa reported that Whitney thought her one-on-one with Christian went swimmingly. “I definitely made her think that,” Christian said. “Nothing has changed.” Give him an Emmy. Sarah Beth did make one final push to the Kings to get Hannah booted, not-so-subtly stating that Hannah could last for a while if they don’t go for her next week.

Meanwhile, talks continued about Week 5. Everyone knows it’s dumb to not target Christian and break him and Alyssa up, but nobody wants to get blood on their hands. “I’m literally in here scared to go after Christian. My sister is probably screaming at the television, ‘Go after Christian!'” Azah told Derek X. “I think everyone is feeling that. If it’s not successful, you are really screwed,” he said. Derek X. later told Claire and Tiffany that if it’s a double this week, he’d nominate Sarah Beth and a Joker and backdoor Christian. Too bad it isn’t, but that also relies on the Veto being won by the right person. Tiffany encouraged Derek X. to take a shot at Christian because, of course, she did so she won’t have to.

Claire later cam-talked that she does not want to win HOH this week and shared who she’d evict among the duos (Britini over Britini/Azah, Christian over Christian/Alyssa), and that she trusts Derek X. She also wouldn’t mind chaos happening next week. Same, girl. This HOH, which some have figured out is endurance, is by far the biggest one yet this season with house targets running out and everyone being scared to make a move.