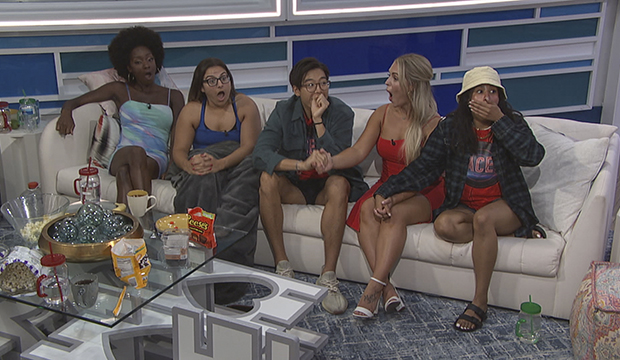 The team twist on “Big Brother 23” is donezo. Host Julie Chen Moonves made the announcement during the August 5 live episode, following the unanimous eviction of Whitney Williams.

The twist began four weeks ago in the season premiere, when the 16 original contestants were divided into four teams: Jokers, Aces, Kings and Queens. The Aces performed the worst during this phase, with both Whitney and Brent Champagne being evicted. The Queens and the Jokers lost one person each, Travis Long and Brandon “Frenchie” French, while the Kings finished with all four of their members still in tact. So what does the elimination of the team twist mean going forward?

The most obvious change is that now every houseguest is playing for himself or herself. In other words, whoever wins the Head of Household competition will ensure their individual safety, and they have the freedom to nominate anyone they please … with the exception of Claire Rehfuss, as she is safe until jury thanks to winning the last wildcard comp. As of press time, the endurance HOH comp was still going on in the backyard. We’ll all find out who wins during the Sunday, August 8 episode.

The two major alliances that have been created so far during “BB23,” the Cookout and the Royal Flush, already include people from various teams, so the twist being over shouldn’t dramatically affect gameplay. The Cookout includes two Jokers (Azah Awasum and Derek Frazier), one Ace (Hannah Chaddha), one King (Xavier Prather) and two Queens (Kyland Young and Tiffany Mitchell). The Royal Flush consists of one Ace (Derek Xiao), three Queens (Kyland, Tiffany and Claire) and four Kings (Christian, Xavier, Alyssa Lopez and Sarah Beth Steagall).

SEE‘Big Brother 23’s’ Brent: ‘I have no problem being the butt of the joke’

In addition to the team twist, Season 23 also introduced another new wrinkle to the reality TV show: a much higher grand prize. For the first 22 seasons the houseguests competed for a $500,000 check, but now the money has been upped to $750,000.

During Thursday’s live episode, the house voted unanimously to send home Whitney over Hannah. Julie then had a one-on-one conversation with Whitney where she informed her about the Royal Flush alliance, explaining how that was why Christian didn’t take her up on her offer to backdoor Derek X. Whitney was impressed to see such a big alliance in the house, but expressed her own disappointment she wasn’t included.