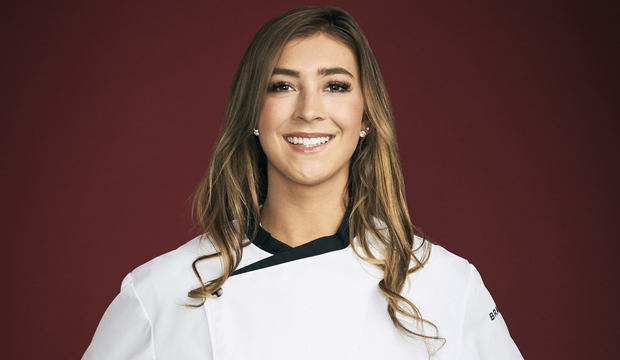 “My expectations coming into this competition were pretty high,” noted Ava Harren, the first person eliminated from “Hell’s Kitchen: Young Guns.” Following her ouster midway through Monday’s second episode, the 23-year-old bikini model from Anchorage, Alaska sounded off outside the Las Vegas restaurant. “I thought I had a good shot, but my first two challenges sucked,” she confessed. “At the end of the day, Matthew had uncooked chicken and I think maybe he should be standing here.” She was referring to Matthew Francis Johnson, the second person up for elimination by Gordon Ramsay because of his poor performance in the alcohol challenge.

Ava’s dish was a bourbon-marinated grilled pineapple with soy olive oil Worcestershire salmon. Chef Ramsay called the pineapple “knackered,” a word she mistook for “naked.” He then noticed her salmon was raw, which surprised him because salmon is the “the one thing” he thinks of when he thinks of Alaska.

“I’m so disappointed because I’m Alaskan and my salmon was raw,” Ava stated in a confessional. “I’m embarrassed.”

In the end, Chef Ramsay deemed her salmon to be worse than Matthew’s [under-cooked] bourbon-glazed chicken breast, so he took her jacket. “I’m looking for a protege that can be catapulted into the top of the tree. Right now you are not ready for that,” he told the former swimsuit model and current meal prep chef.

Ava had a rough start to the competition, as her orange chicken in the season premiere was criticized for lacking flavor and only earned her two out of five points. She didn’t have enough time to rebound, as she was sent packing at the halfway point of the second episode.