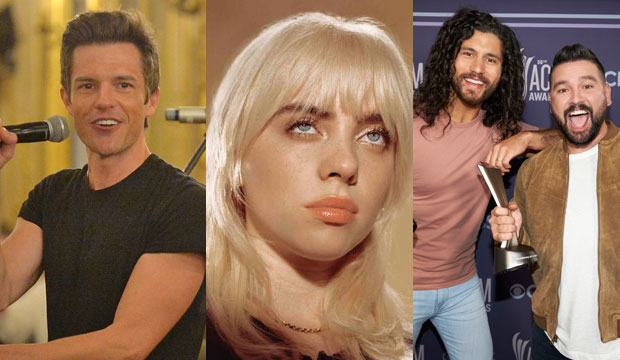 At Gold Derby you can predict who will win the Oscars, Emmys, Grammys, Tonys, and more. And now you can also predict the Billboard 200. Each week you can make your picks for which albums will earn the number-one through number-five spots on the chart. You can also predict how many equivalent album units the week’s top album will earn as calculated by Billboard based on album sales, track sales, and streams. Hurry and make your first predictions right now.

Each week the eligible user with the highest prediction accuracy will win a $100 Amazon gift card, eternal bragging rights and a spot on our Billboard 200 predictions leaderboard. (See our contest rules.) It’s free to register for an account via email, Facebook, Google or Twitter, so what are you waiting for?

SEEOur readers react to Billie Eilish’s ‘Happier Than Ever’ album: Is it ‘gorgeous’ or ‘atrocious’?

Making your predictions will influence our Billboard 200 racetrack odds each week. You can keep changing them throughout the week until the cutoff time on Thursday at 11:59 pm Eastern. Rankings and album units are based upon data revealed every week on Billboard.com. Sound off with other fans in our music forum.

For the first week of our contest, you’ll have until August 12 to predict the results of the tracking week of Friday, August 13, through Thursday, August 19. So keep in mind a few high profile releases coming on August 13, including country duo Dan and Shay‘s “Good Things,” rock band The Killers‘ “Pressure Machine,” and 5 Seconds of Summer member Luke Hemmings‘s debut solo album “When Facing the Things We Turn Away From.”

But don’t forget the carryovers that have already proven themselves as chart-topping hits. Olivia Rodrigo‘s “Sour,” Doja Cat‘s “Planet Her,” and Morgan Wallen‘s “Dangerous” have been fixtures near the top of the chart, while newer releases like Billie Eilish‘s “Happier Than Ever” and Nas‘s “King’s Disease II” might continue to make an impact.