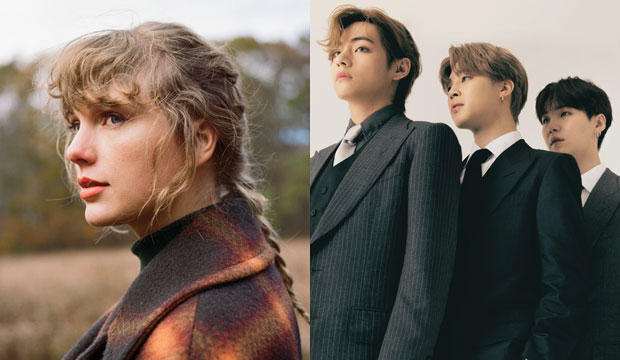 After a big year for pop music, with massive hits like “Blinding Lights” and “Rockstar,” not to mention big album eras from the likes of Pop Smoke, Taylor Swift, and Lil Baby, who’s likely to take home trophies at the Billboard Music Awards on May 23? Let’s take a look at some of the top categories, which are decided by measuring commercial performance on the Billboard charts.

This is probably the easiest category of the night. The Weeknd’s “Blinding Lights” is obviously the biggest song nominated: it was number-one on the year-end Hot 100 chart, and since then it has made history as the only song ever to spend a full year in the top 10. So The Weeknd has this category pretty much on lock. “Blinding Lights” could likely pick up another award for Top Radio Song, as well as Top R&B Song.

Taylor Swift is another safe prediction. She’s the only female artist nominated for Top Artist, so it would make zero sense for her to lose here against four rivals who aren’t nominated for the top award. Swift is aided by her smash album “Folklore,” which debuted atop the Billboard 200 and reigned on the chart for eight non-consecutive weeks, and her immediate followup “Evermore,” which also debuted at number-one.

K-Pop sensations BTS are the front-runners here. The band had a big year, notching two chart-topping albums and getting their first three number-one hits on the Billboard Hot 100 with “Dynamite” (which topped for three non-consecutive weeks), as well as “Life Goes On” and “Savage Love” alongside Jason Derulo and Jawsh685 (which topped for one week apiece). BTS also came in at number-one on the year-end list for Top Artists — Duo/Group. If they do win, it would be their six BBMA, and their second for Top Duo/Group after their 2019 win, which would tie them with Destiny’s Child and One Direction as the only artists to win more than once.

The runner-up here would probably be Maroon 5. That group scored one of their biggest hits last year with “Memories” and have also had two more charting singles, “Nobody’s Love” and “Beautiful Mistakes” featuring Megan Thee Stallion. Those songs might not be enough to edge BTS out on this one, but we’ll see.

This category is one of the hardest to figure out. Lil Baby is obviously out since he didn’t get a Top Artist nom, unlike the other four nominees. The strength of “Blinding Lights” could carry The Weeknd to a win here, in addition to his hit album “After Hours” and his budding hit “Save Your Tears,” which both spent multiple weeks in the top 10. “Save Your Tears” eventually reached number-one thanks to a remix with Ariana Grande, but not until after the BBMAs eligibility period ended on April 3.

That said, Pop Smoke’s album “Shoot for the Stars, Aim for the Moon” has surpassed “After Hours” in overall units, and he has also had hits even after Billboard’s year-end list’s cutoff in late November, so could he upset here? Meanwhile, Juice WRLD and Drake are such close contenders with their own massive chart hits that they could surprise too. But for the moment I might lean towards The Weeknd, with Pop Smoke right behind.

This is another category that could go to the late Pop Smoke. “Shoot for the Stars” has had a consistently strong chart run and the most album units out of the nominees. It’s also helped by a couple of its rivals — namely “After Hours” and “Folklore” — losing steam in the last few months of eligibility. Still, I wouldn’t be surprised to see “Folklore” edge Pop out for a win given its huge sales.

This award should easily go to Pop Smoke. Similar to Taylor Swift in Female Artist, Pop Smoke is the only one of the New Artist contenders to also be nominated for Top Artist, so a win here should be pretty obvious. He would be the first act to win this award posthumously, after his shocking murder last year.