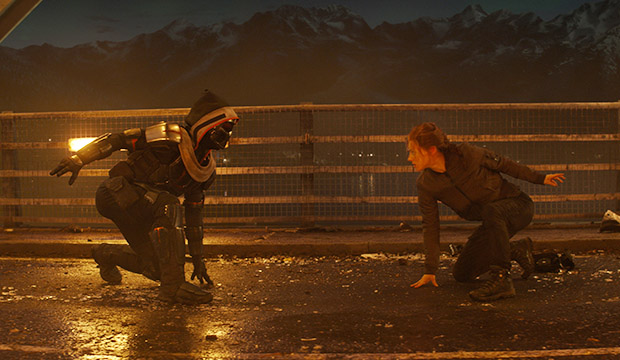 After being delayed by more than a year, Marvel’s “Black Widow” is finally coming to theaters on Friday, while Disney+ subscribers can catch the superhero theatrics from the comfort of their own home that same day (for an extra, one-time fee of $29.99, of course). The standalone film, which follows Scarlett Johansson’s spy and founding Avengers member Natasha Romanoff, is the definition of long-awaited and highly anticipated. Directed by Cate Shortland, the film was meant to launch the fourth phase of the Marvel Cinematic Universe in May 2020, but the real world had other plans, and it’s now following in the footsteps of the Disney+ series “WandaVision,” “The Falcon and The Winter Soldier” and “Loki.”

Still, Marvel remains committed to its big-screen MCU entries even if this is the only Nat-centric film we’ll see. The movie easily proves there is — and always has been — plenty of room to explore Natasha and her story in depth. It’s a shame that Marvel did not realize this a decade ago and that this is the one and only film of its kind that we’ll ever get. Because of this, it’s best to go in with the intention of savoring every minute of it. To better prepare you for that journey, here are five things to know before you watch “Black Widow.”

“Black Widow” probably would have been better had it been released several years ago, in the film’s proper place in the overall timeline of the MCU. But that doesn’t really matter now, so here’s what you need to know about where it fits in. The movie picks up in the aftermath of the events of “Captain America: Civil War,” with Nat on the run after helping Steve (Chris Evans) and Bucky (Sebastian Stan) escape T’Challa (Chadwick Boseman) in Germany, a decision that violated the Sokovia Accords. But the quiet existence Nat has planned for herself — set up with the help of a new character played by O.T. Fagbenle — is short-lived, and she’s forced to confront her past when it rudely comes calling.

Natasha was introduced way back in “Iron Man 2” (2o1o), a full year before we ever met the likes of Captain America and Thor (Chris Hemsworth). But even though the character predates both men, we still know very little about her past and her life outside of the Avengers. The film will finally attempt to rectify that massive oversight as it digs into Nat’s past and the makeshift family of her youth.

Oscar winner Rachel Weisz plays Melina Vostokoff, a mother-like figure and scientist who is an older Widow who went through the Red Room before Nat was even born. “Stranger Things” star David Harbour brings humor to Alexei Shostakov, a supersoldier known as the Red Guardian who was the Soviet Union’s equivalent of Captain America. He has a real inferiority complex when it comes to Steve and is a father figure to both Nat and Yelena Belova, the latter of whom is brought to life by the scene-stealing Florence Pugh.

Yelena is another graduate of the Red Room and is like a little sister to Nat, right down to the sarcasm and squabbling. In the comics, the character took on the Black Widow moniker, and since we know Yelena will appear in the Disney+ series “Hawkeye,” which is slated to debut later this year, it stands to reason she could take up the Black Widow mantle following Nat’s death in “Avengers: Endgame” (2019).

3. We’ll learn what put the red in Nat’s ledger in Budapest

For years now — since the first Avengers film in 2012, really — we’ve been hearing about the red in Nat’s ledger and what happened in Budapest with Clint Barton (Jeremy Renner). “Black Widow” finally reveals what happened there and why the events of that particular mission have weighed so heavily on Nat over the years. We’ll learn what has driven her to do enough for the good guys to get her ledger into the black once and for all.

SEE Emmy Experts slugfest: Will ‘WandaVision’ and ‘The Falcon and The Winter Soldier’ have a Marvel-ous breakthrough? [WATCH]

4. The movie will introduce the mysterious Taskmaster

In addition to fighting demons from her past, Natasha will also have to take on a new foe known as Taskmaster in “Black Widow.” In the comics, the character possesses photographic reflexes, which gives him the ability to mimic the movements of everyone he sees. This means every fight essentially turns into a fight against one’s self, as his skills become equal to the person he is fighting. Marvel has somehow managed to keep everything about the live-action version of  Taskmaster a secret, including who is portraying the character. However, it’s probably safe to say fans will be more than a bit surprised by the film’s version of the character.

“Black Widow” might be a standalone film, but it feels similar to at least two of the films that preceded it in the MCU: “Captain America: The Winter Soldier” (2014) and its follow-up, “Civil War.” Fans will notice there are tonal and thematic similarities to the former, which was a similar action-spy flick that not only reunited Steve with someone from his past (Bucky) but also introduced viewers to the person who would eventually succeed Steve as Captain America (Anthony Mackie’s Sam Wilson).

Strictly from an action standpoint, “Black Widow” seems to pull from or mimic sequences from both films, between the larger set pieces that feel like they were heavily influenced by “The Winter Soldier” to a car and motorbike chase that feels reminiscent of Bucky’s attempt to escape in “Civil War.” None of this is a bad thing — there are far worse films in the MCU that “Black Widow” could have emulated — but it does feel a bit repetitive at times because of this.